We are going into our 5th season of competition bbq and we felt that it was time for a new logo. We wanted to have something that branded us more as a competition bbq team. The Mrs. did her magic and we present to you this:

If you don't stay up till the wee hours of the morning you might have missed this.

While KC Masterpiece is certainly far removed from the historic beginnings of Kansas City barbecue, it was, for better or worse, the beginning of a stereotype. As anyone who has dined in Kansas City's fine barbecue establishments will tell you, there are many kinds of barbecue sauce to be found. When I visited Arthur Bryant's and Gates, neither of their sauces tasted anything like KC Masterpiece. Yet when people talk about "Kansas City style" barbecue sauce, they usually mean thick, molasses-sweetened, and smokey. And that's what KC Masterpiece was when Rich Davis created it in 1977.

First of all, this is just about the thickest barbecue sauce I've encountered. I almost felt as though I could turn the opened bottle upside down like they do with Blizzards at Dairy Queen. It's some seriously viscous stuff. Its color is dark brown, both from the molasses and caramel coloring, and it's got a bright shine to it. The mouthfeel is completely smooth, with no bits of anything in the mix.

The flavor is better than I expected. It's certainly not going to make you forget your favorite barbecue sauce, but compared to that abomination that I tasted last week, it's not bad. The first thing you taste is quick burst of bright sweetness, which gives way to a more brooding molasses sweetness and a teensy bit of vinegar tang. And in the end, this sauce does actually leave you with a little bit of heat that will get a nice mild burn going if you have enough of it.

Overall, as with almost all mass-marketed barbecue sauces, this sauce is dominated by sweetness. But for a mass-marketed sauce, you could do a lot worse. 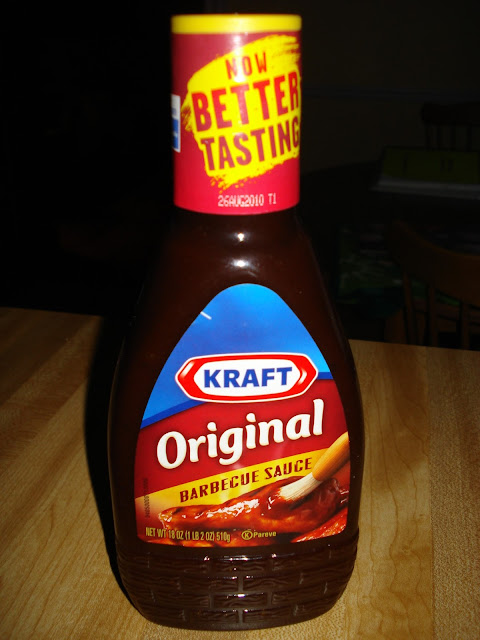 Yes, you read that right. Kraft. I wanted to start 2010 off with some barbecue sauces that you can find at the grocery (or as some of you would call it, the supermarket). Not all of them will be as ubiquitous as Kraft, but I figure this is a good place to start.
In the 1950s, J.L. Kraft Co was one of the first companies to sell barbecue sauce on a nationwide basis. Since then, many many companies have followed suit, but Kraft is still the most dominant player in the barbecue sauce market - their current market share hovers around 44 percent!
They have created a seemingly endless number of "flavors" - Honey, Thick 'n Spicy, Hickory Smoke, Mesquite Smoke, Light (only 30 calories), Brown Sugar, Honey Roasted Garlic, Hot, Char-Grill - and that's not even all. But for purposes of a review, I figured I'd stick with the original.
You maybe wouldn't have guessed it from this sauce's dark brown color, but this sauce is KETCHUPY. It tastes like really sweet Ketchup. There are faint hints of smoke flavor and vinegary tang and some onion and mustard, but I feel like I'm reaching to even mention them. The sauce is extremely thick and smooth, with no textural variety. Overall, this stuff is just way too one dimensional, and the one dimension isn't even executed well. And by the way, that dark color comes from "caramel color."

I guess you can tell that updating the blog more frequently was not one of my New Years resolutions, but I will try to do better.


Here are some things to look forward to in 2010
The opening of the new Martin's BBQ - ummmm whole hog is coming to Middle Tennessee
Taquería tour down Nolensville Rd - with a fully functional map to guide you along the way
The first bbq contest of the year - Smoke on the Water in Little Rock with $100,000 up for grabs
and more of your favorites from BBQ Sauce of the Week and Friday Night Slice

Since it is Thursday, I will leave you with this:
R.I.P Vic