Concoctions from the Ulika Headquarters volume 1

The Ulika Headquarters is a lot like the Food Network test kitchen (minus the endless budget, clean up crew, New York City, etc.). This is where the brains of the operation (yours truly) plays with new ways to cook a brisket or comes up with things like wrapping corn in bacon and smoking it. The headquarters is also the birthplace of the newest Ulika menu item, "Kitchen Sink Wings."

These wings always taste a little bit different, but are always smoky and tasty.
Posted by Unknown at 10:48 PM 3 comments: Recently, team Ulika found a great deal on an egg on Craig's List. We've been eyeing these things since we cooked next to an all-egg team in Lenoir City in 2006. We got a comprehensive sales pitch, errr, breakdown of how cool the eggs the really are.

Unlike Ryan Leaf, New Coke and The Adventures of Pluto Nash, the egg does not disappoint.

If I had to recommend one backyard grill, this would be it. You can go low and slow or hot and fast. The ceramic cooker allows the heat to be retained for long, slow cooks - making it perfect for cooking small amounts of BBQ (one to two butts). On the hot and fast side, you can sear steaks at temperatures over 750 degrees for great crust.

The egg can be used for baking as well, cooking breads, pizzas, meat loaf and more...team Ulika looks forward to experimenting with egg baking in the future. The egg may also become the team's new competition chicken cooker.
Posted by Unknown at 10:35 PM 1 comment: 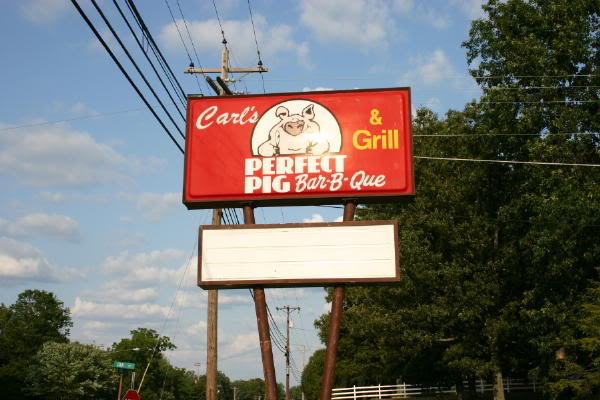 In the conversations and compiled lists of the "best barbecue in Nashville," there are certain places that always seem to come up. You know the ones. Now some of them deserve it, and some of them don't. But one place that I never hear mentioned very much is Carl's Perfect Pig. Now to be honest, Carl's is not exactly in Nashville. It's in White Bluff, Tennessee, which is west of Nashville on Highway 70, almost to Montgomery Bell State Park. It's not too far of a drive from the city, and if you live in Bellevue, shoot, it's just about 15 minutes. And I'll tell ya - I'd put their pulled pork and their ribs up against just about any place in Nashville. 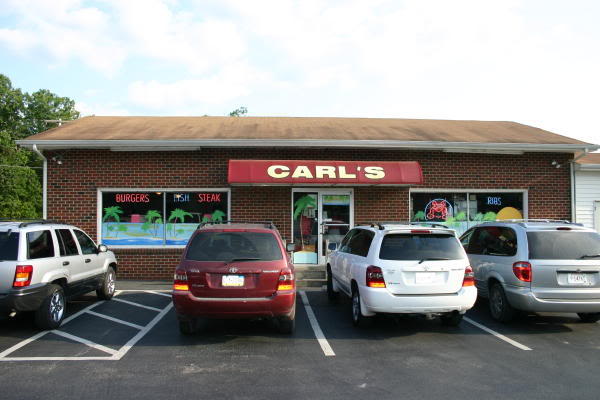 A full parking lot is almost always a good sign. Is it somewhat of a red flag that "BURGERS" and "STEAK" are being advertised alongside "RIBS" in the front window? Yes it is, but at least it's all meat and it's all being cooked on a grill, and not something like, say, pizza. Or crab cakes. 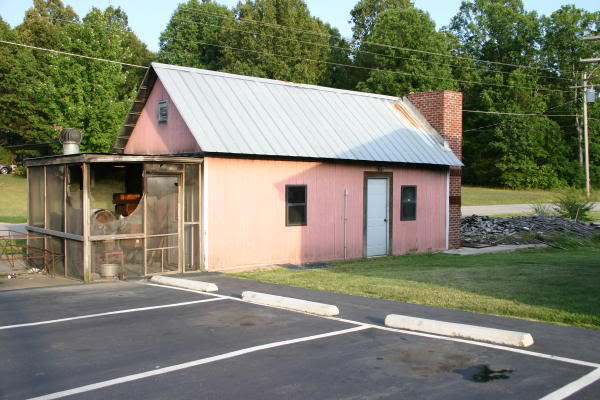 Another good sign, nay, a MUST for any barbecue restaurant worth its salt is the presence of a smokehouse or a smoker. Right when you get out of your car at Carl's, that beautiful smoke smell hits your nose. Extra bonus points for the smokehouse being pink. Speaking of pink... 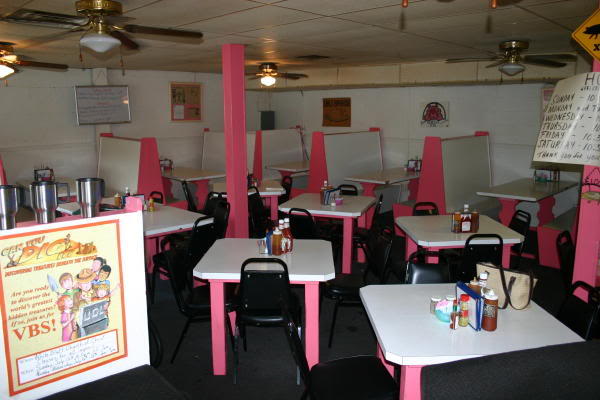 This picture probably elicits one of two reactions from you, doesn't it, dear reader? It's the pink. The pink is right up there with pig puns, jolly pig caricatures, and jorts in its ubiquitousness in the world of barbecue. I happen to love the pink, but I distinctly remember an occasion when I was asked to remove my pink Dale Jr hat, so I know it's not for everyone. Also, don't worry, this picture was taken after they'd closed for the day. Yours truly went up to the cash register to pay, only to be informed that Carl's only accepts cash. I was cashless, so I had to drive ten minutes to an ATM and back. Please note, dear reader, that if you were to encounter an occupancy level such as this at a barbecue place during regular business hours, you should be quite wary. 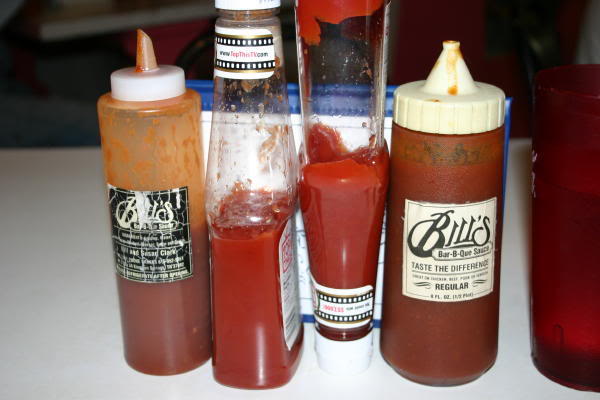 I'm a big fan of barbecue sauce being on the table. In this case, we have the hot and the regular. I'm not sure who Bill is, or what his relationship is to Carl, but he makes one hell of a barbecue sauce. It's ketchup-based and sweet, but with a lot of other mysterious flavors swirling around in the mix. I especially liked the hot, which had just the right amount of kick. 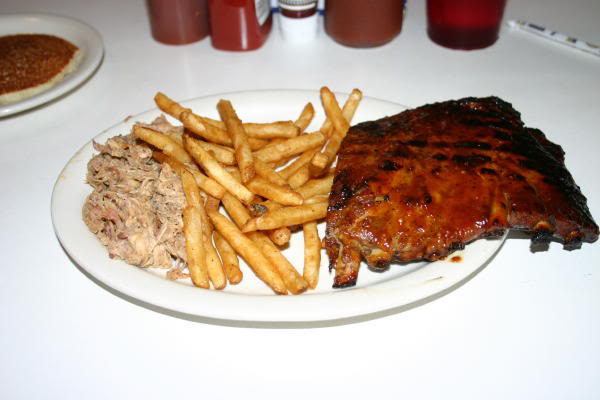 Carl's is known for their ribs, but I also wanted some pulled pork, so I went with the combo plate. I'm not sure why Carl's serves fries with their ribs (pulled pork plates come with two sides), but man, those fries go good with that Bill's sauce. The ribs were definitely fallin-off-the-bone, but not cooked to oblivion, and they had a great flavor. It's hard to see in the picture, but it seemed like maybe they were finished on a hot grill? The pork was about as good as you'll find in a restaurant, dear reader - tender and juicy, and flavorful enough to eat without sauce. 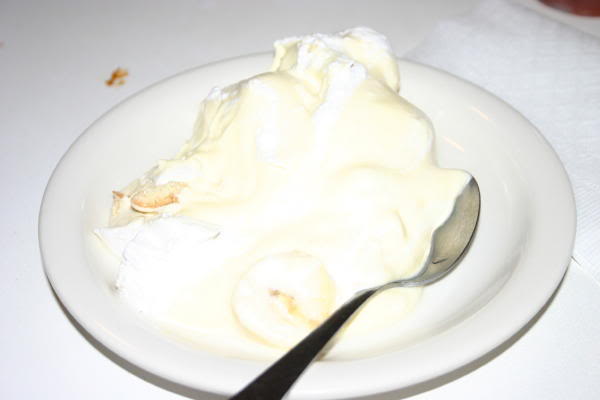 I think if I had to pick just one dessert that goes perfect with barbecue, it would have to be banana pudding. It's the perfect cool down after all that blazin, ya know? Carl's version is excellent, with just the right proportions of bananas, wafers, pudding and whipped cream. The flavor is creamy and soothing, never harsh. At a place like Carl's, you meet all kinds. Among other people, I met a couple from New York on a road trip who swung into Tennessee just to go to Carl's. It seems the owner of their favorite barbecue place in NYC, Virgil's Real Barbecue, told them that Carl's was a must-visit. I had a good chuckle knowing that people up in New York know and love Carl's Perfect Pig, but most of Nashville has never even heard of it.
Until next time...
Posted by BP at 8:18 PM 2 comments:

The Williamson County Fair gets underway this weekend, and once again they are having their buddy non-sanctioned barbecue cookoff. One thing about this cookoff - it's anyone's to win. Yep, even if you refuse to peel the membrane off of your ribs, or nearly burn your tent down sqirting lighter fluid on an open flame.
The article in The Tennessean touches on a point that I always try to make clear when talking to people about these events - barbecue cookoffs are like strip clubs. You can ogle all you want, but unless you know somebody, you're not gonna be sampling the merchandise. I mean, the title of the article sums it up:

There was an interesting piece in this week's Nashville Scene. No, I'm not talking about this guy. Or these people. There was a review of the restaurant-formerly-known-as-the-Blue-Moon-Cafe. It's a place I knew well, charming shithole that it was. Supposedly now they've gussied it up a bit. I hear lobster's on the menu now.

Anyway, apparently this new incarnation, in addition to serving seafood, is going to have a go at doing barbecue. As you can see on their menu, they claim to serve "honest to goodness, true, for real, no kiddin', tennessee hickory hardwood, pit smoked perfection." That's a lot of descriptors! They go on to mention "pit master barry baker."

Well, leave it to Scene food critic Carrington Fox to pull back the curtain on these Wizzards of frOZ:

"When I asked the server-in-training where the pit was, she looked at me as if maybe I were asking for a latrine. Sensing her confusion, I pointed to the menu and asked where—or if—the barbecue was cooking. She retreated to the kitchen to ask her mentor, and a few minutes later she returned with the enthusiastic report that the barbecue comes from Sysco."

That's rich, right there. The barbecue comes from Sysco! I wonder if they smoke it over at that big factory by John Tune Airport? And I wonder if it comes in that awesome Dharma-esque packaging? Dharma Pulled Pork!