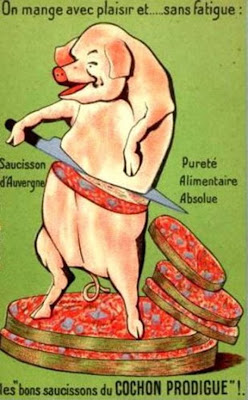 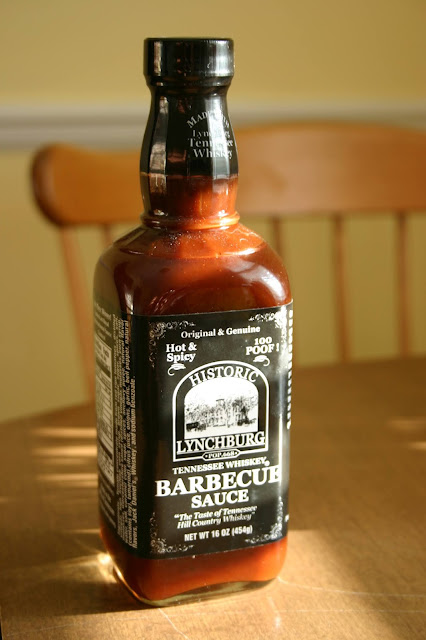 I apologize for the absence of BBQSOTW lately. My school and work schedule has caught up with me. The good news is that things should be quieting down in the next couple of weeks. Which is good, because we have a lot of barbecue sauces to review!
Today's sauce is an interesting one. You might remember that a few months ago, we reviewed Jack Daniel's Original No. 7 Barbecue Sauce. That sauce is the result of a licensing agreement between the Brown-Forman Corporation, which owns the Jack Daniel's brand, and the H.J. Heinz Company, which manufactures the sauce. It's a high profile partnership that has sold a lot of barbecue sauce. But in reality, other than the name, it has little to do with Lynchburg, Tennessee.
Enter the Lynchburg Merchandise Company, a local company from "the Hills of Tennessee," who will apparently put whiskey in just about anything. In addition to three different versions of the barbecue sauce (hot & spicy, mild, and "diabetic friendly"), the company sells the following jack-enhanced products: bean sauce, jalapeno seafood cocktail sauce, gourmet deli & grillin' sauce, chipotle back beans and corn salsa, sippin' and dippin' salsa, steak and burger seasoning, BBQ rub, flapjack and waffle honey maple syrup (!), swineapple rib glaze, jalapeno pepper ketchup, three kinds of hot sauce, and five kinds of pepper jelly, sweet tater butter, and on and on. Very impressive! The company's products are sold online by Porky's Gourmet Foods.
The barbecue sauce, which is cleverly packaged in a Jack Daniel's shaped bottle, won first place in the American Royal International Sauce Contest. It's a tomato based sauce that is relatively thick and dark burgundy in color. The aroma is tart and savory. In tasting the sauce, a rush of tomatoey sweetness comes first, enhanced by brown sugar. The "hot & spicy" that the label advertises is not far behind, as this sauce finishes with a peppery kick that builds with each taste.
Overall, this is a good sauce, and better, actually, than the "name brand" Jack Daniel's sauce.
Grade: A-
Posted by BP at 4:54 PM 1 comment:

Inspired by Chez's Sunday morning breakfast post, I wanted to bring you this little gem: