BARBECUE SAUCE OF THE WEEK: Mississippi 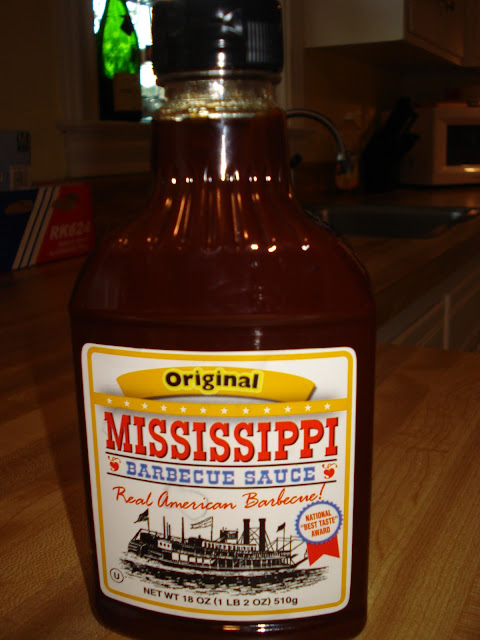 Fear not, Mississippians! Mississippi Barbecue Sauce actually appears to have been named after the river and not the state. Norm Vaughan was an OTR truck driver from Ohio, whose regular route took him up and down the Mississippi river. A barbecue enthusiast, Vaughan claims to have stopped at "every rib joint and barbecue shack" along the way. But in all of those stops, he never did find a sauce that was truly to his liking. So he decided to make it himself. He sold the big rig and developed Mississippi Barbecue Sauce in 1993. By 1995, the brand had been sold to the Fremont Company, an Ohio outfit that originally specialized in sauerkraut, but eventually expanded to include a variety of different food products. Norm claims that the sauce "blends the sweetness of Chicago, the mellow tang of Memphis, and the spices of New Orleans." I claim that it tastes like a slightly spicier version of Kraft. The sauce has that generic sweet, ketchupy, liquid-smokey flavor that we've come to expect from MOR supermarket barbecue sauces. But the worst thing to me is the texture - a repulsive, overly thick, glopppy quality. I feel like I would need to melt this if I were going to serve it (which I'm not). Overall, a complete disappointment.
Grade: D
Posted by BP at 11:34 AM 2 comments:

The Varsity is now selling their famous chili. For just $3.89 you can bring The Varsity right to your home.

I have been interested in hog butchering for a while now. I finally bucked up and bought a half of a hog from Fudge Family Farms, and I did some basement butchering. Here are some of the photos I took.

We picked up the hog in Lexington, TN. I used an old chest freezer and 200# of ice.

First, I deboned the leg into three roast. All the scraps went into sausage.

I cut the shoulder into the butt and picnic. I used the butt for pulled pork and the picnic for sausage.

The loin was split in half length wise. The bottom portion is where I got the spare ribs and the pork belly. I then cut the tenderloin off and made 2-3 inch pork chops from the rest of the loin. The hardest part was getting that backbone off without a band saw, but a clever and a hammer got the job done.

The head, tails, and trotters went into head cheese.

Here is a shot of the bbq pork belly. I braised it for 2-2.5 hours and then finished it on the hot grill.

I don't have a picture of it, but I made pimento cheese sausage that was damn good.
Posted by Unknown at 8:38 PM 5 comments: