Kansas City is one of those locales, along with places like North Carolina, Memphis and Central Texas, that is inextricably linked with the cuisine of barbecue. The best-selling barbecue sauce in the world is K.C. Masterpiece. The premier sanctioning organization of barbecue contests today is the K.C.B.S. You get the point. So it's no surprise that there is no shortage of great barbecue joints in the Kansas City area. A couple of weeks ago, I had the opportunity to visit two of the most famous. I had been to K.C. before, but my barbecue experience was limited to a trip to Fiorella's Jack Stack. And while the Stack did not disappoint, on my return trip I wanted to get down to the roots of Kansas City barbecue. And a quick check of the history books will tell you that the roots of K.C. barbecue begin and end with Arthur Bryant's and Gates.
Both restaurants can be traced back to a man named Henry Perry, who learned the art of smoking meat while growing up in Memphis around the turn of the century. When he moved to Kansas City in 1907, he opened the restaurant which would eventually be sold to and named for one of his understudies named Arthur Bryant. Literally right down the street, another of Perry's understudies joined with George Gates in 1947 to open Gates & Sons Bar-B-Q. Both restaurants still stand today, approximately 1/4 mile apart, on Brooklyn Avenue, just east of downtown Kansas City, Missouri.
My travelling companions and I arrived in a furious snowstorm and were ready to eat. We got the rental car, entered 1727 Brooklyn Ave into the Hertz NeverLost, and arrived at Arthur Bryant's in about 25 minutes. 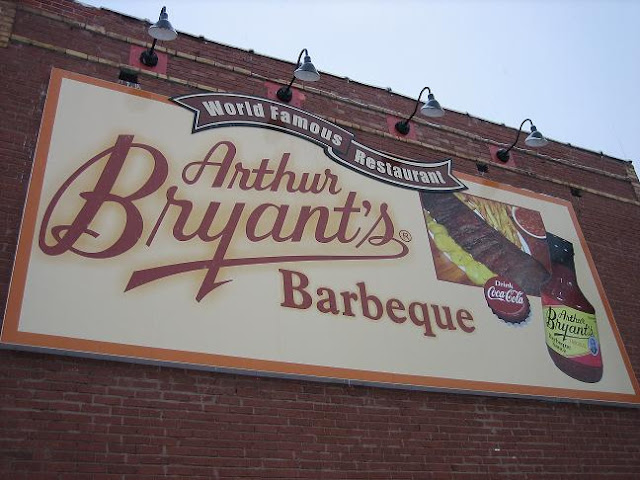 You've doubtless already heard this pearl of wisdom before, but it bears repeating - you know you're at a great barbecue restaurant when you smell the smoke as soon as you get out of the car. Bryant's was no exception. We stepped in from the cold and found a sizable crowd, even at 3:30 in the afternoon. And now I'll give you a little bit of bonus wisdom - never trust a barbecue restaurant that doesn't have barbecue sauce out on the tables. Again, Bryant's passed the test. 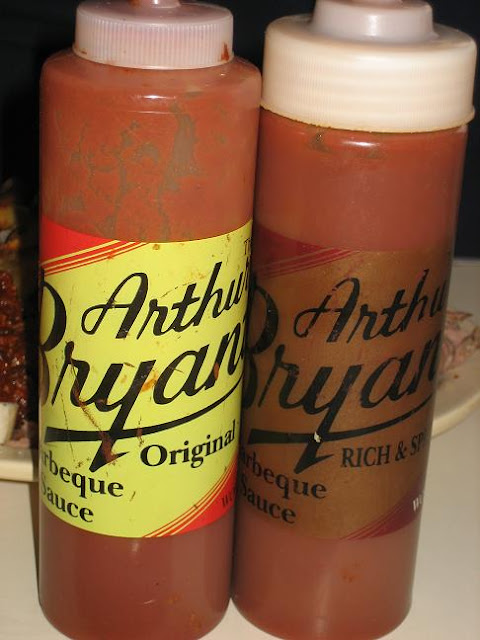 And now, on to the food. You may notice that on the menu, there is no brisket. That's because they just call it "beef." And if, like me, you're from pork barbecue country, you may also be wondering what the heck "burnt ends" are. They are kind of the leftover parts from a brisket. I'm definitely game for that, because leftover parts are sometimes the best part! 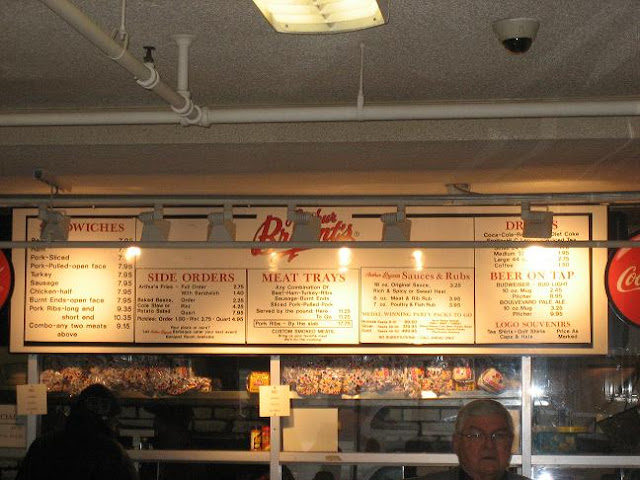 In the photo below, the burnt ends are on the left and the brisket is on the right. I guess I was a little surprised to see that the burnt ends came pre-sauced. And as you can see, the pre-saucing was substantial. Consequently, I couldn't taste much but the sauce. I was much more impressed with the brisket. It was very, very tender and juicy, and with good flavor. It was quite simply the best brisket I have had in a restaurant. 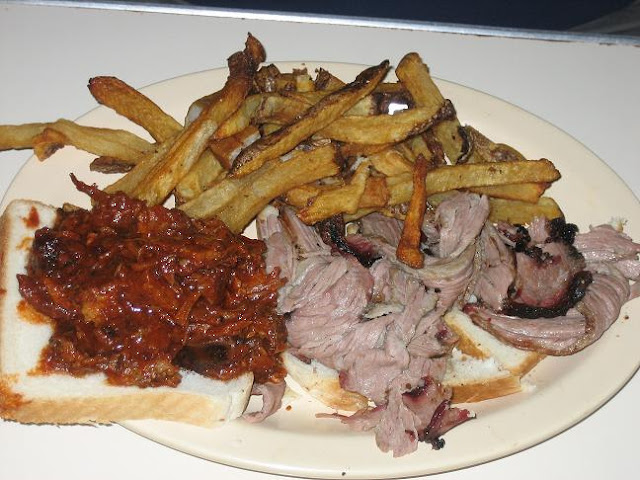 No sauce was even necessary, which was a good thing, because I was not so impressed with Arthur Bryant's sauce, especially the "original" version, which was too much vinegar and not enough sweetness for my taste. The other item that we tried was the pulled pork. The pork was a bit confounding. Like the burnt ends, it was served with a liberal amount of sauce already applied. 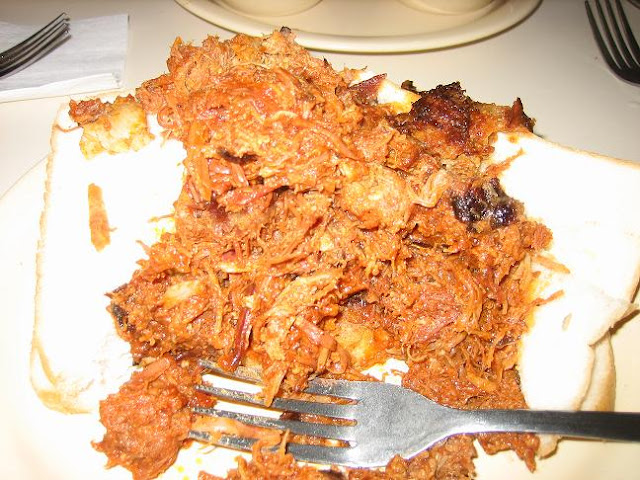 Again, as a result, the flavor of the sauce dominated. And it's a shame, because the pork was very tender and actually seemed to have a good flavor under all of that sauce.
Knowing we had a second dose coming, we tried our best to restrain ourselves, and headed down the street to Gates & Sons. 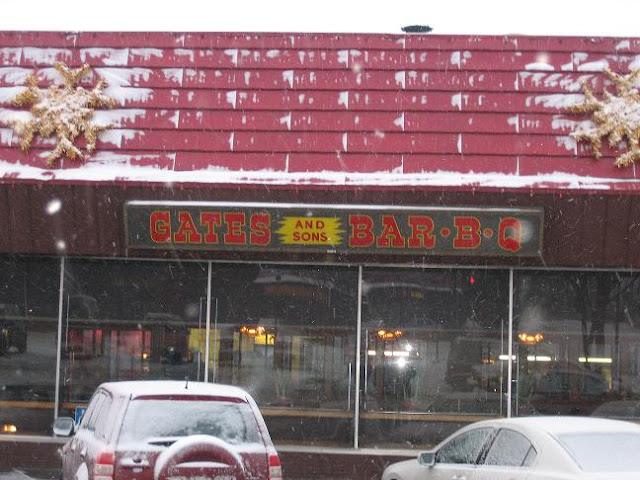 I had an immediate fondness for Gates because the color scheme was similar to another place that I love. Gates even has a signature order-taking phrase that appears on all of their materials - "Hi, May I Help You?" - kind of a more polite version of "What'll Ya Have?" - I love it. 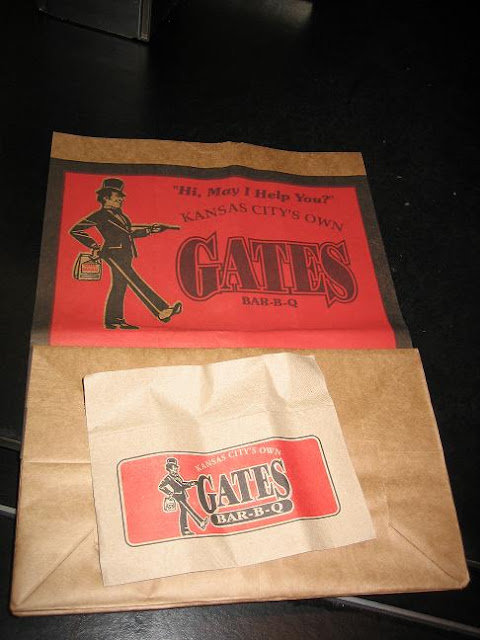 Like at Bryant's, the brisket is simply referred to as "beef." 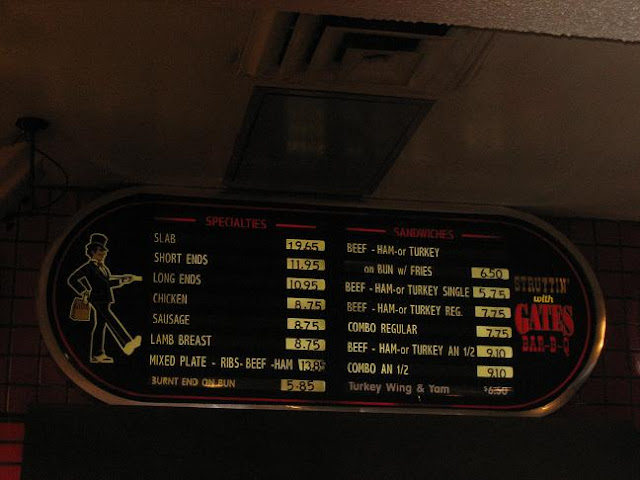 I ordered a beef sandwich and an order of Bar-B-Q Beans. The beef sandwich is simply a large serving of brisket between two slices of white bread, with a bit of sauce. 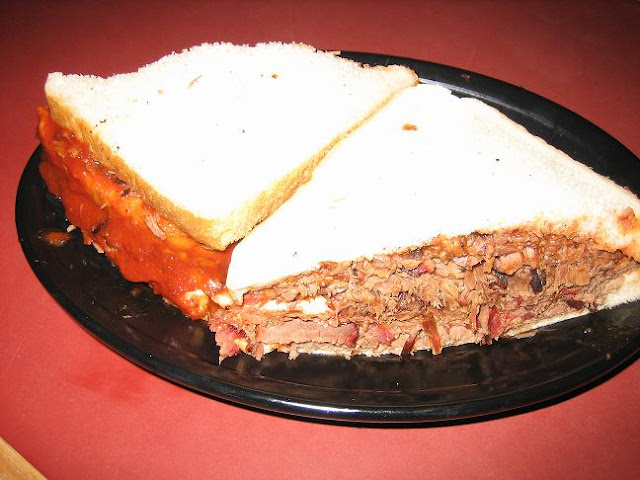 The brisket was not as moist, nor as flavorful as the brisket at Arthur Bryant's. But in this case, all manner of ills are cured by Gates' barbecue sauce, which I thought complemented the sandwich perfectly. It's kind of a strange barbecue sauce - not too sweet and more than a little spicy, but not too vinegar-y either. I ate a lot of it on this sandwich.
The real highlight of our visit to Gates - heck, I'll just say it...of our visit to Kansas City - was the Gates Bar-B-Q beans. It's hard for me to accurately describe how good these baked beans were. Best baked beans ever. 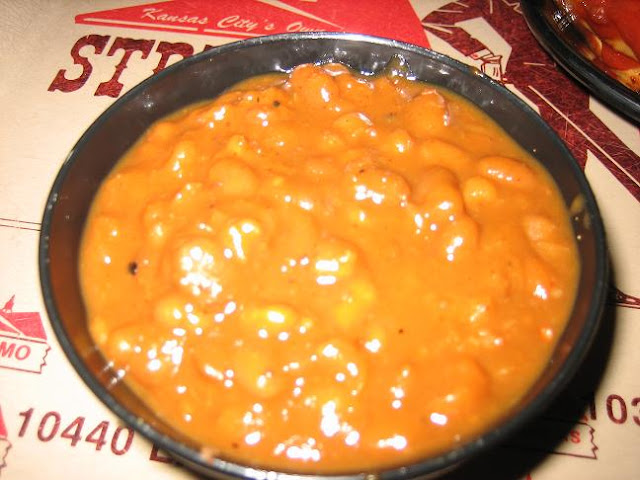 They were sweet, as baked beans should be, but not too spicy. There was not any actual barbecue in them that I could discern. But there was a certain flavor in the mix that I just could not put my finger on. Was it caramel? Molasses? Whatever it was, it was working. I think I would fly back to Kansas City just to eat these beans again.
Overall, the trip was a success (did I mention that we got to see the Titans get a big win, too?). I know that Bryant's and Gates are just the tip of the iceberg in Kansas City, but I feel that experiencing these two places is the perfect starting point. I hope to get back sometime in the future and experience more.
Until next time...
Posted by BP at 8:53 PM

Labels: BBQ, on the road

Great blog! It's fun to see Kansas City mentioned by someone - and especially about their BBQ. I suggest however, that you visit Smokehouse BBQ - and go to the original location in Gladstone, Missouri - just north of KC. I find it the best, with even BETTER baked beans than Gates, and THE best crispy sandwich around...

It's too bad you didn't try the burnt end on bun at Gates. It's a great example for those who rarely get to try them. I would suggest visiting Oklahoma Joe's (in its original gas station location) the next time you visit Kansas City.