I went to Memphis this weekend with my future brother-in-law, who has only recently moved to Tennessee and had never been to Memphis. I think I'm a good person to show someone Memphis because I actually like it. I don't know if it's some kind of intrastate rivalry or if it's xenophobia or what, but so many people in Nashville seem to have such a bad attitude about Memphis. I think it's a fun, ultra laid-back city, and it feels so different than Nashville even though it's just three hours away. And oh yeah, they've got some pretty good barbecue, too.
I've been to most of the "big name" barbecue restaurants in Memphis over the years. And while some of them do some things well, I think that to varying degrees, they are coasting on their reputations (and their mail-order profits) at this point. Case in point: future B.I.L. and I made the obligatory visit to Rendezvous this weekend. While I love the atmosphere and think eating at Rendezvous is a great experience, I remain confounded as to why their ribs are considered among the best.
I'm discovering more and more that the heart of Memphis barbecue lies off the beaten path. This weekend, the case for that argument was further strengthened by my visit to one of Memphis' true gems - Payne's Bar-B-Q. 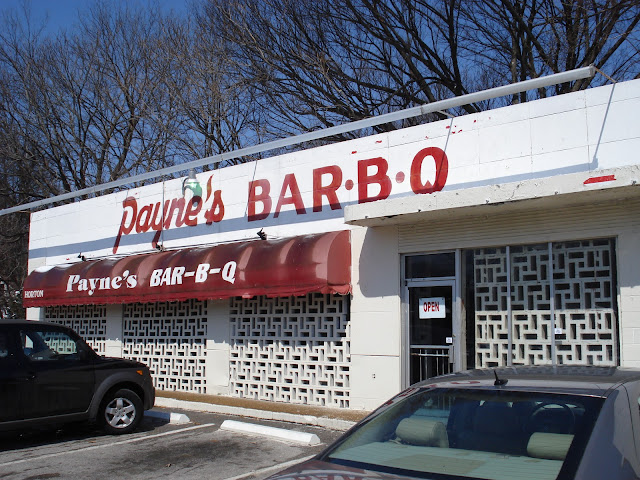 Payne's is in a converted old filling station on Lamar Avenue. The former garage part of the building is the dining area. As we quickly discovered on this chilly day, the dining room is unheated. Though there was a steady flow of carry-out business, we had the dining room to ourselves. 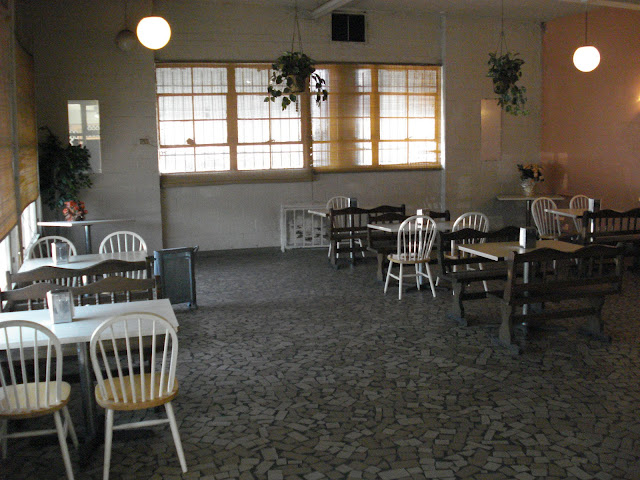 The menu is definitely on the simple side. 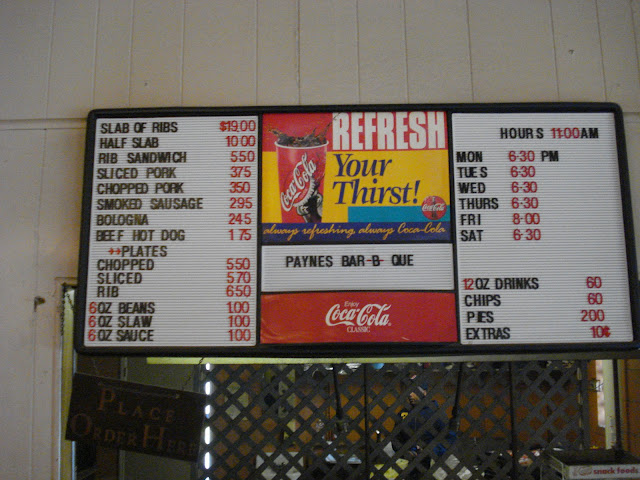 I ordered both a sliced pork sandwich and a chopped pork sandwich, because I just couldn't make up my mind, and because I was hungry. When we ordered, the lady working behind the counter pulled a whole shoulder (!) out of the smoker and began cutting off meat for our sandwiches. That was a good sign, and so was the fact the buns were toasted on the grill. The finished products were ready a minute or two later. 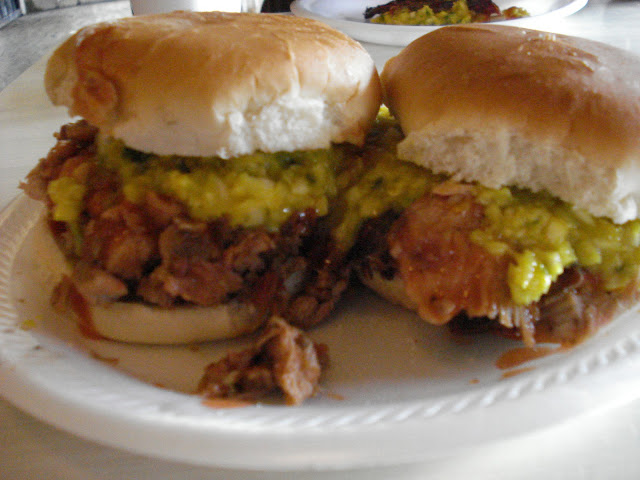 Dear reader, as you have probably by now surmised, I eat my share of barbecue. Most of it is okay. Some of it is really good. Some of it is great. But every once in a while, I have something that is so great that it goes in its own category. This is the best barbecue sandwich I have ever had. I really, really wish the photo I took had turned out better so you could fully appreciate it, but if you really want, you can do a Google image search and find some better ones.
While both the sliced and the chopped versions were great, I think the chopped version (on the left) truly takes the sandwich to its greatest height. The pork was very tender, but with plenty of crispy bark pieces in every bite. But the barbecue itself was not what made this sandwich great. In fact, the sandwich is a case study in the whole being greater than the sum of its parts. The barbecue is good on its own, but not incredible. The same goes for the spicy, sweet barbecue sauce and the unique neon green slaw. But when all of the ingredients are combined on that toasted bun, the resulting onslaught of flavors is bordering on divine. God bless this pork sandwich, God bless Payne's, and God bless Memphis.
Payne's Bar-B-Q
1762 Lamar Ave
Memphis, TN 38114
(901)272-1523
Posted by BP at 9:07 PM

Outstanding. I would've had to try that bologna on the menu. Ulika BBQ Team, please make me some smoked bologna soon.

you have an interesting blog , I am planning a bbq trip to tn in october. Any amazing restaurants not on the tourist trap, much obliged.

Just ate their chopped sandwich, ribs, and beans. Fantastic! I have eaten at many, many BBQ joints in Memphis and throughout the southeast. This was some of the best I've ever had. I will be going back soon to make sure I didn't just catch them on a good day.

Just ate @ Payne's last weekend
(8/29) for lunch. Had 1/2 rack of ribs. I didn't want a sandwhich so i got the ribs. Utterly FANTASTIC! Better than Corky's (wet) and Rendezvous (dry). People were taking out like mad. I sat and ate even with flies buzzing around. I did not care. Fantastic!
Meaty, juicy with alot of flavor.
A must! P.S. The best pulled pork
i ever had was Bishops outta Alabama. Hand delivered (cooked) by Mr. Bishop hisself. I was doing a recording session with the legendary guitarist, Travis Wammack
(who is friends w/ Mr. Bishop) and
lo & behold a 5 pound cooked pulled
pork hind quarter arrives for breakfast no less. YOU MUST ORDER
OR GO! I couldn't stop eating it!
We took the rest back to Brooklyn, NY a day or two later. Oh yeah!
http://www.bishopsbbq.com/