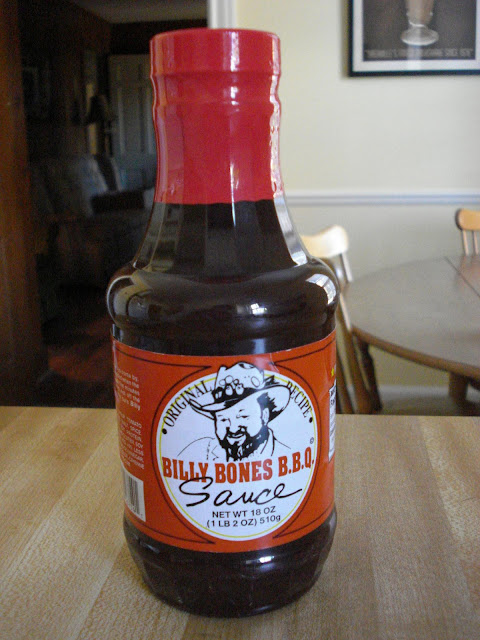 William Wall, better known as Billy Bones, is one of the barbecue world's legendary characters. One of the Upper Midwest's giants of barbecue, he has parlayed a successful competition career into an even more successful catering empire. And of course, he'll sell you some barbecue sauce, too.
Rugged and smoky, and with a hearty burn in the aftertatste, this is a no-nonsense, no-frills sauce - a man's barbecue sauce, if you will. There is not much sweetness to be found, but there is a virile dose of vinegar, which gives way to a savory spiciness. It's dark brown in color and just barely coats a spoon. This sauce is going to add a kick of tangy, spicy flavor to whatever you use it on.
Grade: B
Posted by BP at 5:47 PM

Labels: BBQ SAUCE OF THE WEEK, VIRILE VIGOROUS AND POTENT

I'd be more likely to buy his sauce again if he didn't act so jerky on the Barbecue News boards. It's fine to have a big, bold personality. It's not OK to talk down to others and accuse them of things they didn't do. Hint for Billy Bones - Think before you speak and be sure you're on target.