This week has been a rather controversial one for our old friend, the Chicago-style deep dish pizza. An article published in this Tuesday's Chicago Tribune follows historian Tim Samuelson as he digs into conflicting legends about the dish's original creator. Former Texas football star Ike Sewell of Pizzeria Uno has long been credited with selling the first deep dish pie in 1943 and has almost always been given the nod for creating it as well, but now different theories persist regarding the inventor(s). Following various paper trails and family testimonies has led Mr. Samuelson to the names of two other men, Ric Riccardo and Rudy Malnati, who worked with Sewell in the mid-1940s, serving "pizza thick as a sewer lid and almost as heavy." Riccardo went on to open his own Italian restaurant (Riccardo's, closed in 1989) and Malnati's sons now have their own Chicago pizza chain, Pizano's Pizza. Sewell may have claimed the fame, but which of these men deserves the real credit is still a mystery.

But back here in Nashville, the only mystery surrounding Chicago-style pizza has been the difficulty in finding it. That is, until this new place popped up just around the corner...

I noticed the appearance of the new Chicago Style Italian Beef restaurant on Nolensville Road sometime last fall and simultaneously began hearing about it from different circles of friends. Several people had stopped by to pick up a sandwich from the odd location at the end of the Aquatic Critter strip-mall on Nolensville Pike, but I hadn’t heard any reports on the pizza. Last Friday night, we decided to dive in try the Meat Lover Chicago Style Deep Dish Pizza.

Now, when it comes to Chicago-style pizza, it's all about the crust and the sauce. You're looking for a fat, fluffy, buttery crust and gobs of thick, chunky tomato sauce - straight up crushed tomatoes are not uncommon. Spices come and go, but a heavy, direct tomatoey taste is a must. These pizzas are heavily doused with a mozzarella-dominant blended cheese and, since it's Chicago, Italian sausage is typically the meat of choice. And of course, the proper deep dish pie absolutely requires a knife and fork. 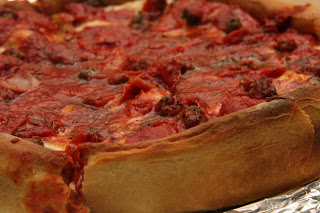 So how did this pie measure up? Well, let's start with a positive: the crust was simply outstanding. It was thick, puffy and absolutely delicious, cupping the outside of the pie with soft, buttery goodness. As for the rest...

Sadly, I must report that the pizza was a complete disaster. The ho hum, nondescript cheese was applied so scarcely that I had to fight to find and taste it. It atleast tried to be a blended cheese, blending bad mozzarella with another cheese (maybe - could it be? - ricotta) that resulted in some overall consistency issues. I can't rate the pull-away factor as there was not nearly enough cheese present to pull. The meat was scarce as well, both in quantity and in flavor, but nothing could match the utter horror that was the sauce.

I have eaten pizza from the gas station. I've had it at high school basketball games, Chinese buffets, and microwaved it from hotel vending machines. I've eaten every variety of frozen pizza...but I have NEVER had pizza this bad and it can all be blamed on the sauce. I just can't say enough about how hideously unbearable and inedible it was. Aside from the fact that it was WAAAAYY over-spiced with basil and thyme, oddly matched with a peculiar, unfitting hint of sweetness, the tomato taste was completely omitted. I only assume tomato was ever involved because the sauce was red. You won't believe me when I tell you this, but the sauce tasted exactly like Japanese miso soup. Could there have been some sort of mistake? I even did the full sauce wipe away, but could not escape the lingering flavor. It ruined what was once good crust.

I was so excited and eager to try this place and wanted so badly for the pizza to be good. Now I just feel sad and hurt by this experience. The Mr. and I both agreed that this was the worst pizza that we have had, throwing away all but the one slice each that we tried. Sorry. 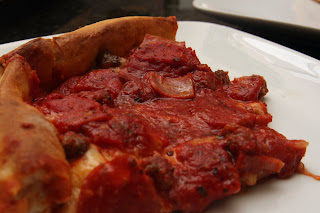 Please, someone else try this place and tell me that I'm crazy.

Got any suggestions for places that I should cover? Let me know!
Posted by the mrs. at 10:00 AM

I'm sad to hear it, but not surprised. I have never been able to find good Chicago-style pizza outside of Chicago. Oh well, I guess that just makes it more special when I'm there.

I have always stuck to the usuals, like Uno, Gino's East, Giordano's, and Lou Malnati's, but last time I was there I saw an article in Time Out about the best pizza places in the city, and there were several "off the beaten path" that I want to try when I go back.

Thanks to your Pizza review every Friday my mouth waters for Pizza so I now I have to have it for lunch every Friday!

BP,
I want to try this Burt's Place in Chi-town. I saw it recently on No Reservations.

I am voting that you try Sal's at Stewart's Ferry Pike off of I-40. Also, NYPD in Mt. Juliet at Providence Marketplace.

I have always had good experiences here. While, admittedly, it can't hold a candle to actual Chicago deep dish (and I grew up eating the stuff), it's a fair approximation down here. You ought to give it one more shot before completely writing it off altogether.

I live near this place, so we order fairly often. I'm not a huge fan of thick-crusted pizzas, but this place really did make me a believer. The thin crust is great, too. And they've been really consistent for us, too. I highly recommend going back and giving it another shot.

Love this weblog. Your Memphis BBQ guide has been great... never would have made it by Payne's if you hadn't said anything!

I found this great Chicago pizza blog if you want to find the "off the beaten path" type joints. They give full reviews + pictures. I personally recommend Burt's & Albano's. There's another good one in Cicero called Al's.