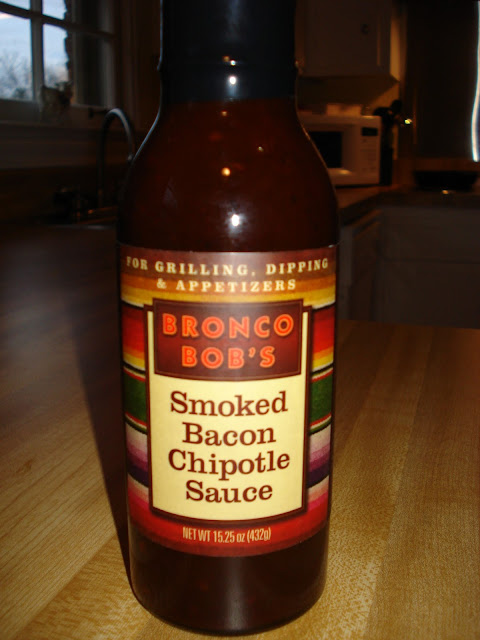 Chipotle is a word that has certainly come into vogue in the last few years as a food descriptor, but the chipotle pepper is hardly new. The Aztecs were making these smoked jalapeno peppers long before Hernando Cortez and his crew came dancing across the water. Though chipotles have traditionally been associated with Mexican cuisine, nowadays you will find them popping up in all sorts of places.
Bronco Bob's, a product of LWC Brands, is hardly a johnny-come-lately in the chipotle game, though - they've been at it since 1994. They have an entire line of "gourmet chipotle sauces," ranging from Roasted Raspberry Chipotle to Toasted Apricot Chipotle to our business at hand - Smoked Bacon Chipotle Sauce.
The packaging is simple and subdued, with colorful southwestern tapestry forming the background. There are a couple of recipe suggestions on the side, including Smoked Bacon Chipotle Cocktail Weenies.
Upon uncapping, the sauce yields a subtle smoky, vinegary aroma. The consistency of the sauce is quite thick, with bits of bacon suspended throughout.
Yep, that's right, there are actual pieces of bacon in this sauce. And while that is totally awesome, you should know that the bacon flavor is actually very subtle. More prevalent in the mix are the molasses sweetness, the tanginess of vinegar and the medium-grade kick of the chipotle peppers. As the name implies, there is a nice overall smokiness to the sauce.
Grade: B
WIN a FREE BOTTLE of the BBQ SAUCE OF THE WEEK!
We have a bottle of Bronco Bob's Roasted Raspberry Chipotle Sauce to giveaway to one of our readers. This sauce is the reigning 2009 Scovie Award winner for fruit based barbecue sauces. All you have to do is visit the website and post a comment here. One winner will be randomly selected on the following Tuesday night and sent a free bottle of sauce. Just leave an email address so that we can contact the winner.
Posted by BP at 3:28 PM

B? It's BBQ sauce with f***ing bacon in it. I'm giving it an A+ just for existing. But I guess that's why ya'll are Team Ulika and I'm a scrub who will eat anything outside of a McRib. Okay, including a McRib.

Tough to argue with bacon in anything. If it can't be fried, add bacon and you got yourself a winner!

Enter me in the contest. I think that bacon in BBQ sauce is a winner. brandt.brad@gmail.com

Hi,
Just wanted to let you know I have a free contest listing page that runs from Tuesday to Monday nights called Tuesdays Tournaments. Go here to see.
http://onceuponaqpon.blogspot.com/2009/03/tuesdays-tournaments_30.html
onceuponaqpon(at)gmail(dot)com

Would love to try this!!! Thanks for the awesome giveaway!

This sounds amazing! Thanks for the chance to win.
ruthann (dot) francis (at) gmail (dot) com

Bacon in a BBQ sauce sounds delicious! I can see certain of my family members using it to spice up breakfast, lunch, and dinner!

The bacon and peppers make it sound delicious.