BBQ SAUCE OF THE WEEK: Heffys 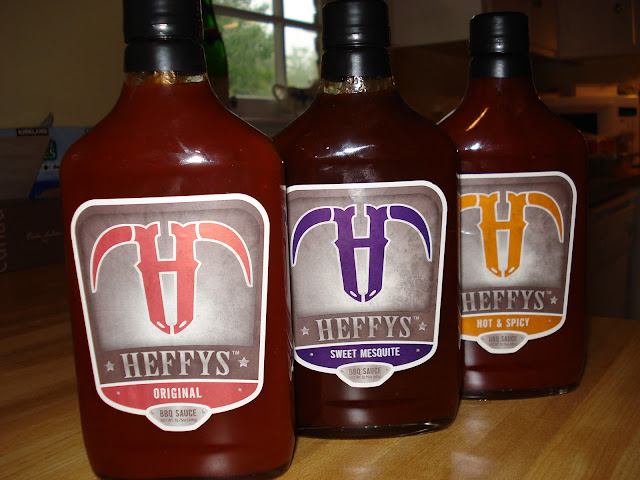 This week, we have the pleasure of reviewing not just one sauce, but a whole line of barbecue sauces. Heffys was developed by three friends using an "old Kansas recipe" and launched at the American Royal in 2007. In a short time, the sauce company has experienced quite a bit of success, having picked up wins at both the 2008 Royal and the 2009 Scovie Awards.
Unlike some product lines where the sauces are completely different from each other, Heffys sauces are quite similar, with all three seemingly having been developed from the same base sauce.
The "Original" version is very much ketchup-based, with notable elements of Worcestershire and mustard that give the sauce a nice tanginess. It has a lightly sweet and spicy finish. The texture of the sauce is silky smooth and of medium viscosity.
The "Sweet Mesquite" sauce is basically a thicker, sweeter version of the original. Although that tanginess is still present, it is overshadowed by a honey and brown sugar sweetness. This is the most conventional of the three sauces.
In my opinion, the Heffys base formula reaches its greatest height in the "Hot & Spicy" version of the sauce. Here, our old friend Habanero makes an appearance and kicks the heat level up a couple of notches. The mustard and Worcestershire tanginess and the light sweetness are excellent complements for the burning heat of the peppers. And the peppers even seem to bring out some flavors that were not apparent in the other versions, specifically a bright almost citrus-y flavor.
Grades:
Original - B+
Sweet Mesquite - B
Hot & Spicy - A-
WIN a FREE BOTTLE of the BBQ SAUCE OF THE WEEK!
We have a bottle of Heffys BBQ Sauce to give away to one of our readers. All you have to do is visit the website and post a comment here. One winner will be randomly selected on the following Tuesday night and sent a free bottle of sauce. Just leave an email address so that we can contact the winner.
Posted by BP at 9:26 PM

I love the Saucy girl tees! Thanks!

I want to try it!

I think my family would really enjoy the Spicy one. Tou don't usually find spicy ones in the grocery stores.

Loved the Spicy - went through it way too fast and could use another bottle for free.... :)