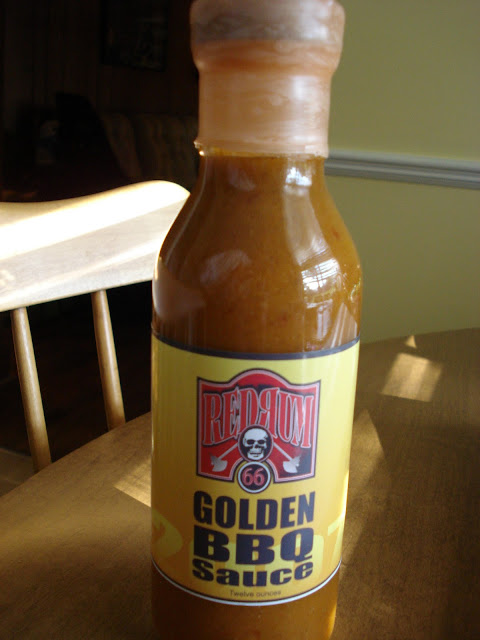 And now for something completely different.
At first glance, this might look like just another barbecue sauce (albeit a South Carolina-style one, with its yellowish orange color). But the story here is an especially interesting one.
Ed Rome, better known as ChileHeadEd in the hot sauce community, is a trained chef who began making hot sauces for friends and family. He grows a variety of hot peppers in his own garden, smokes them himself, and uses the resulting mash to make several different hot sauces.
Starting with his 2006 batch of peppers, Ed began selling his sauces commercially under the name RedRum. Since he is using only his own crop of peppers, there is a limited amount of sauce made every year, and when it's gone, it's gone. In keeping with the "hot sauce / barbecue sauce as wine" allegory (of which I am a big fan), RedRum sauces list the vintage year on the label.
The RedRum line also includes three barbecue sauces - Sweet, Spicy, and Golden. For the Golden BBQ sauce, Ed took his recipe for mustard-based Carolina-style barbecue sauce and mixed it with his Orange Habanero hot sauce. Any time you see the word "Habanero" in the ingredients, you'd better be ready for some heat, and this sauce has it in spades.
This is by far the spiciest sauce that I have tasted in this series of reviews - "mild" and "medium" are definitely just dots in the rearview mirror. But the heat is nicely complemented by a complex variety of flavors, including sweet notes of fruit and honey, a touch of ginger, as well as fresh garlic and onions. The texture is that of a rough puree, with a bounty of chunks left in. The sauce has an essence that is very earthy and natural, but make no mistake - it will light you up.
Grade: A
More about the production process here.
WIN a FREE BOTTLE of the BBQ SAUCE OF THE WEEK!
We have a bottle of RedRum Sweet BBQ Sauce to give away to one of our readers. All you have to do is visit the website and post a comment here. One winner will be randomly selected on the following Tuesday night and sent a free bottle of sauce. Just leave an email address so that we can contact the winner.
Posted by BP at 5:12 PM

I hope I win

Sounds very good . anything with habanero in it is da bomb!
Jeff

I love the directions on the bottle:

Shake well put on food and then eat. What are you stupid?

I love the packaging of the Champagne Redrum Sauce! Thanks!

I can't believe all of the different sauces that they have. There's something for every taste.

We love BBQ sauces, this one sounds great.