Memphis in May: The Experience 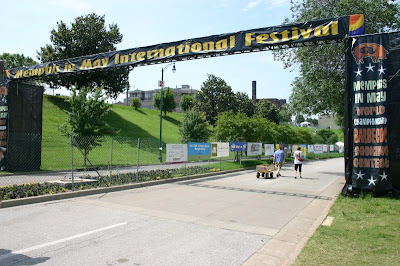 Being from Middle Tennessee, when I tell people that I do competition bbq, they immediately associate the sport, errrrr...hobby, with a single competition: Memphis in May. The first question is inevitably, "Oh! Do you cook at Memphis in May?" Then I must begin the well-rehearsed answer of "No, what we do is a little different. Memphis in May is its own style and blah, blah, blah....." and I begin to lose them. But now, I'm thrilled to have the opportunity to answer that question a little differently.

When BP and I were given an opportunity to participate in the event this year, we jumped all over it - especially since it was Rod Gray from Pellet Envy who invited us to help him in Memphis this year. 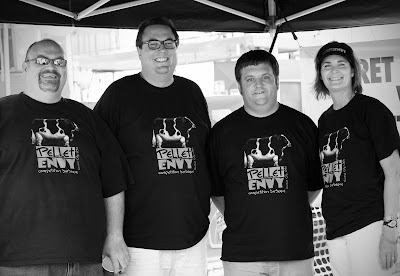 In a KCBS event, it is not uncommon for someone to cook by themselves. With the onsite judging that takes place at MIM, however, it would be nearly impossible to do everything with 1 or 2 people (most teams consist of 20 plus team members). BP and I were honored to be members of Pellet Envy for the weekend and happy to help.

The number of team members is not the only difference between MIM and KCBS. A majority of the teams that compete at MIM only compete in this one contest. That means that they really shell out for this one event. Teams arrive a week early just to get things set up and some teams are more focused on their parties than the bbq. In fact, when BP and I first arrived, our neighbors were overheard commenting on how Pellet Envy was “just here to cook”, meaning that no big elaborate parties were going to be taking place at our site. That was all fine with us. We conversely wished that they weren’t there “just to party”. Their music was so loud that you could not even have a conversation and it was some of the worst music that I have ever heard. Luckily, we were able to take shelter in Rod’s trailer, but the occasional bass drop had us holding onto our seats as the entire trailer shook.

Another obvious difference between MIM and KCBS is the onsite judging. This was my first time to experience anything like this, and for a cook, it is really just a dog and pony show. Rod did a great job with it and explained why he cooks with pellets and gave all the judges a much needed break inside his air conditioned trailer. All of the judges seemed to enjoy the product and we ended up finishing 14th overall out of 106 rib teams. We were very happy with the results for competing in Memphis for the first time.

Overall it was a great experience. Rod and his wife, Sheri, were great hosts and we had the opportunity to see our friends with Peg Leg Porkers (thanks for the party on Thursday night). We also got a chance to meet Chris Lilly of Big Bob Gibson’s and his new chef Ken Hess (thanks for the dinner on Friday night). Marc and Natalie from Grease Lightning also hung out for a while and enjoyed some of Rod's brisket (you didn't think a KCBS guy could go without cooking a brisket at a contest did you?).

I want to thank Rod and Sheri for having us assist them during the weekend. I had a chance to see why Sheri has picked up the nickname of “The Closer”, and let me tell you, she really puts the Envy in Pellet Envy. I also want to thank Karen Walker for the use of her pictures in this post.


P.S. - Sorry it took so long to get this recap up. I am sure ya'll have been on pins and needles.
Posted by Unknown at 8:01 PM

What a great time you had. I would love to experience MIM in any form. We keep saying, "Next year, we are going to go for sure" but May always is full of excuses. Valid excuses, but still.

Rob - It was great to have you and BP be part of Pellet Envy for MIM. We honestly could not have done it without you. Good read. Now you can give the people what they want when they ask!