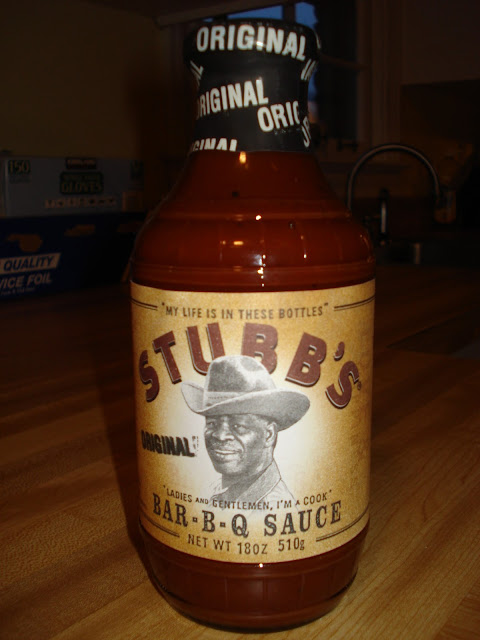 In Middle Tennessee, Stubb's is a barbecue sauce. In Austin, Texas, Stubb's is an institution. It's a restaurant and it's a live music venue. And I'm not talking about Joe Singersongwriter and his guitar or a Saturday night cover band. Stubb's regularly hosts real concerts, and is a key venue at South by Southwest (the Walkmen and Spoon are playing there tonight).
How good is the restaurant? It depends on who you ask. The general consensus seems to be that however good the barbecue once was when the place was in Lubbock, it isn't much count these days. Still, it seems like a very values-driven organization that is committed to more than just making a buck. The sauce arm of the company partners with homeless shelters and soup kitchens across the country and has made it part of their mission to "feed the world."
The Stubb's line of barbecue sauces has been very successful. They have found their way onto supermarket shelves nationwide and were the 8th highest selling barbecue sauce brand in 2009. The sauce comes in six permutations - original, spicy, mild, hickory bourbon, honey pecan, and smoky mesquite. They also make a variety of rubs and marinades.
The "original" version of the sauce is definitely a little bit hotter than your normal sauce that is not labeled "hot." Overall, this is more of a savory and spicy kind of flavor than sweet. There is a modicum of sweetness, but it exists more as a complement than a leading player. The sauce has a very earthy, natural taste, with lots of rich tomato flavor enhanced by notes of vinegar, onion, garlic and tamarind. The consistency of the sauce is relatively thick, with a relatively smooth texture. Bits of pepper punctuate the the dark red color.
Grade: A-
Posted by BP at 11:38 AM

Stubb's is my go to sauce when i don't have time (or energy) to make my own... Consistent and very good

Agreed. This is my go-to store bought sauce. One can of beer, a cup of sauce poured overs veggies and thrown on a grill pan and you've got an easy tasty side.

Thanks for this review, recently I was standing in the aisle at Harris Teeter wanting to purchase BBQ sauce, and debated on this one. Then I thought "Maybe I should check and see if Ulika blogged it yet."