BBQ SAUCE OF THE WEEK: Cunningham's 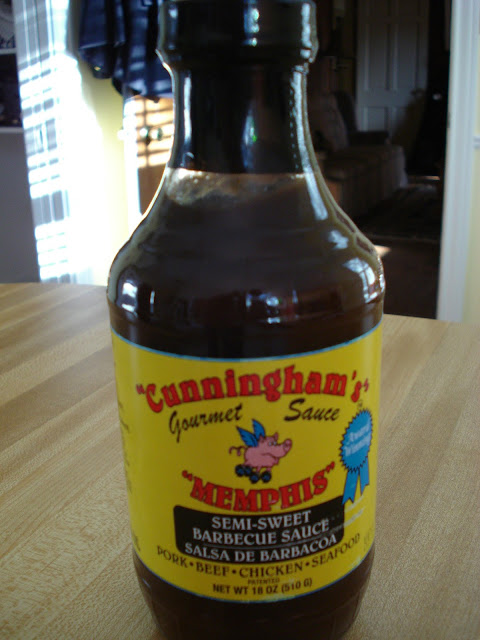 When I saw this sauce on the shelf of my local Publix, the name seemed familiar to me. "Cunningham's"..."Memphis"...as it turns out, what I was thinking of was Willingham's. John Willingham is a Memphis in May legend - a two time grand champion (not to mention an American Royal grand champion). He does make a line of barbecue sauces, and hopefully I will get around to reviewing them. But today's sauce is Cunningham's.
Though "Memphis" is on the label, Cunningham's is manufactured in North Florida. The sauce is dark in color and thick in consistency like a Kansas City style sauce. The texture is completely smooth and almost slick. The texture and extra thick consistency result in an almost gelatinous mouthfeel. The vinegary aroma is arresting, softened slightly by the dark essence of molasses. The label describes the sauce as "semi-sweet," and that is accurate. The sharp tanginess of vinegar is the first flavor, followed by a strangely artificial tasting sweetness and the savory taste of Worcestershire. There is a slight tingle of heat as the others flavors subside. Overall, this sauce falls short in both taste and texture.
Grade: C
Posted by BP at 3:37 PM

What happens to all of these sauces that you don't lika?

every so often BP will purge his fridge of unwanted sauces and they end up at my house. I usually just give them away to those friends that will eat just about anything.

Chattanooga and Nashville, they need to get to Knoxville!

I had often wondered what Milner asked, lol.

February 2, 2012
I, received a call tonight from a friend in Memphis that ran across this web site. The article written by the food critic was such a great surprise. Especially when you work hard as I have to come up with a barbecue sauce that everyone can enjoy, including childern. I, sincerly wish everyone the best. Thanks to everyone.

The only change from the write up is my sauce is not processed in Florida. All products including my Basting Sauce is processed in Paris, TN U.S.A.

Try my Cunningham's Basting Sauce, it will not burn your meat on the grill, therefore, leaving your meat moist. No more dry meat, keep that lid closed and baste everytime you lift it, grill with indirect heat. Try it on your other food products. A little bit goes a long way.