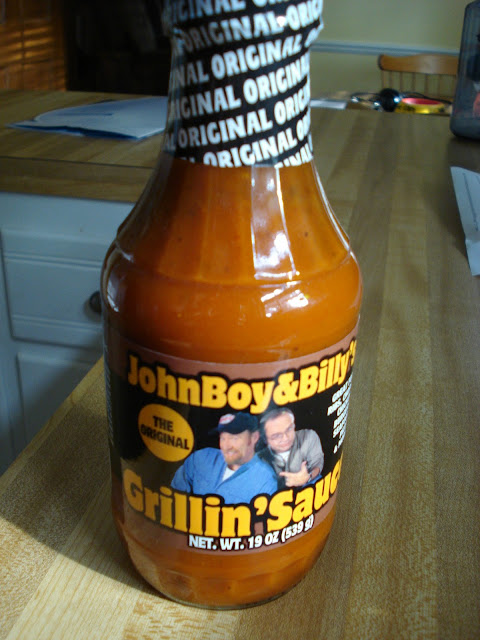 Let me just say right off the bat that I don't listen to "The Big Show". It's nothing personal, I'm just not into that sort of thing. So I honestly couldn't tell John Boy & Billy from Bob & Tom or Rick & Bubba. I pretty much stick to 650 WSM-AM (at home) and 560 WNSR-AM (in the car). Bottom line is I don't really have an opinion about the radio show; I'm just here for the sauce.
Big Show Foods, Inc., which was created to market John Boy & Billy's sauces, sells three versions of the Grillin' Sauce (Original, Sweet&Mild, and Hot&Spicy), an Eastern Carolina barbecue sauce, a steak marinade, and two kinds of hot sauce.
The Original Grillin' Sauce, however, was what started it all when it was unveiled in 1997. This is a tomato-based sauce that is spicier and more complex than most. It's got a moderate amount of sweetness (not too much) that is complemented by tangy vinegar and mustard flavors. Savory and garlicky notes rise up and give way to a nice lingering spicy burn.
Grade: B+
Posted by BP at 11:58 AM

That sounds better than I would have thought. Based on it being a "celebrity" sauce, I thought it would be rather forgettable.

Hey you doing Sevierville this weekend? Thought we'd say hi if you're there.