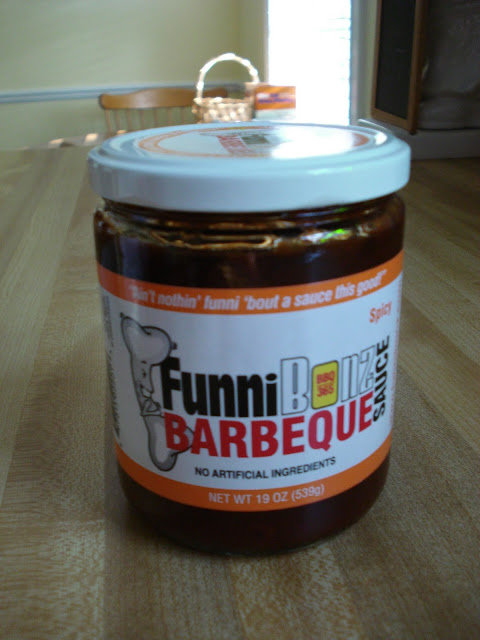 Not to be confused with TBonz dog treats, FunniBonz is a line of barbecue-related products. At this time, they only have sauces (Original, Spicy, Fiery Chipotle, and Tangy Mustard), but they eventually plan offer marinades and rubs as well. The story goes that Jim Barbour, founder of FunniBonz, could not find a barbecue sauce to his liking - all were too vinegary. So, being between jobs, he decided to create his own barbecue sauce, and FunniBonz was born.
The sauce certainly stands out on the grocery shelf due to its being in a jar, rather than the usual bottle, and due to its unique name and label. The sauce promotes a philosophy called "BBQ 365," which is that barbecue sauce can be used year-round in many different kinds of dishes, not just summer barbecue season. And they have a significant web presence (Facebook, Twitter, Blogspot, LinkedIn).
The first thing you notice when you remove the lid is that this sauce is thick! It's not much thinner than honey, in fact. It has a deep brownish-red color, and it has lots of bits of spices in it. Tasting it, you can see that Barbour was definitely going for a sweet sauce - this one is sweet! But while the sweetness might be overwhelming in the original flavor, this spicy version has enough heat to cut the sweetness. It's got a nice burn to it, but it's not overwhelmingly spicy. There are also plenty of other complementary flavors - notes of mustard, garlic, onion, tamarind, cinnamon, and cumin. Overall, it's a very flavorful sauce, and one that I enjoyed.
Grade: A
Posted by BP at 12:29 PM

If you are ever in Sandusky, OH, there is a place you might want to try, although it is a bit pricey: Red Gables. redgables.wordpress.com
Everything is cooked on or in a wood burning grill and oven, except the bread is sourced from a local artisan baker. The apps, meat and veggies are all cooked over mesquite wood and hardwood charcoal. I got some house made shrimp dumplings with a sweet and spicy Thai sauce that were grilled, and a NY Strip that was pepper encrusted and grilled. Everything had a nice subtle mesquite smoke to it, and I love mesquite! The bonus for me, if mesquite wasn't enough, is that they source most of the veggies and fruit from local and local organic sources. They are now looking for a local free range grass fed beef option as well as the conventional meat they serve. The chef and owner Jamie had his indoor wood/charcoal grill custom made in a place in Crossville TN about 20 years ago. I wish I asked Jamie where he got his grill made.