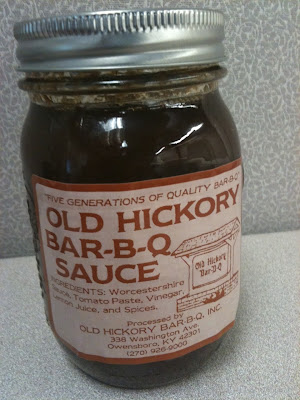 But Old Hickory Bar-B-Q is not in Nashville, Tennessee, but rather Owensboro, Kentucky. Owensboro, which actually calls itself the "Bar-B-Q Capital of the World", is better known for its International Bar-B-Q Festival and for the Moonlite Bar-B-Q Inn. But the locals will tell you that the best barbecue in town is at Old Hickory. Mutton is the specialty in these parts, along with a kind of barbecue stew called burgoo. Perhaps someday soon we will do a report on Old Hickory and Owensboro barbecue, but for today we're just looking at the sauce.

First of all, I dig the label and I dig the Ball jar, both of which probably have not changed in decades. The sauce is ultra-thin and has a deep dark red color. The aroma is of worcestershire sauce and vinegar, and the taste is more of the same. There is a strong savory element, followed by a bright tartness and a hint of tomatoey sweetness. There is a subtle peppery aftertaste. This seems to be a sauce that's made specifically to complement the barbecue it accompanies, so tasting it alone might be kind of misleading. But even on its own, this is a unique sauce - much more worcestershire flavor than your normal vinegar-based sauce.