As much as I love hamburgers (and I do love them a lot), I am more often than not disappointed by the hamburgers that I find in restaurants here in Nashville. Even some of the well-known places that win "best burger" year after year have left me thinking that I could do better at home with a charcoal grill or a cast iron skillet. Well, lately a couple of new players have appeared on the local burger scene, and I thought I'd let you know what I think.
Red Robin is a national chain, with locations from coast to coast. It originated as a local tavern in Seattle in the 1940s, but didn't begin expanding outside the Seattle area until the 80s. It's a full-service, sit-down restaurant, and it also has a full bar. Red Robin is relatively new to Middle Tennessee - they opened in Murfreesboro and Mt. Juliet a few months ago, and have just recently opened their first Nashville location in the new Nashville West shopping center on Charlotte Pike. 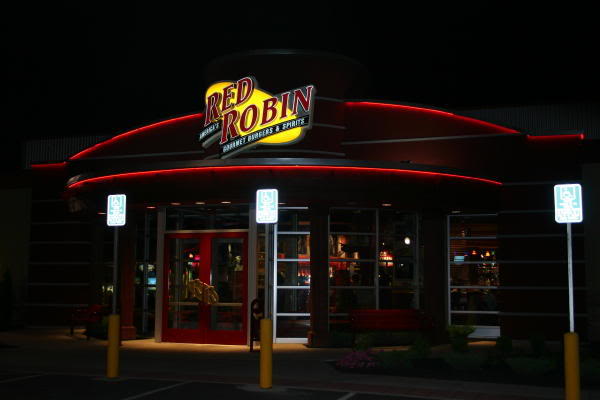 The menu at Red Robin is expansive. Their schtick is offering lots and lots of different burgers with every topping combination imaginable. There's the Bonzai Burger, marinated in teriyaki and topped with grilled pineapple and cheddar cheese. Or the Santa Fe Burger, topped with poblano peppers, guacamole, crispy tortilla strips and pepper jack cheese. Or the Five Alarm Burger, topped with pepper jack cheese, jalapeno peppers, salsa and chipotle mayonnaise. You get the picture. Of course there's also the option to "build your own" from the endless list of toppings and condiments. After visiting the restaurant a few times and trying a few of the readymade burgers, I settled on a modified version of the "Gourmet Cheeseburger," with American cheese, crispy onion straws, red relish and mayo. 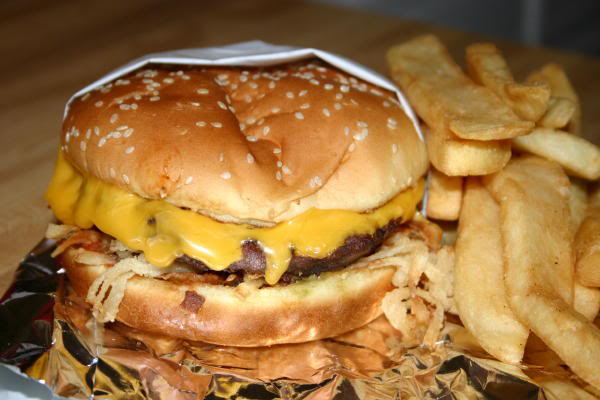 Now that's a tasty burger. The only thing is, I think maybe why it's so tasty is because I've come upon a really incredible combination of toppings. And I think, when it comes down to it, that's the appeal of Red Robin - toppings. The burger patties themselves are not very flavorful. But with 101 variations to choose from, you're bound to find something that will make it flavorful. One other note - bottomless french fries. They do have unlimited french fries at Red Robin. Unfortunately, they are steak fries, which are not my preference. But they do have this incredible seasoning on the table for the fries that is pretty interesting.
Five Guys is different from Red Robin in almost every way. It began on the east coast (Washington DC area) in the 80s and began franchising in the eastern U.S. in 2003. It's a fast casual setup and there are peanuts on the floor. The menu is ridiculously simple - burgers, hot dogs, and fries - all cooked to order. 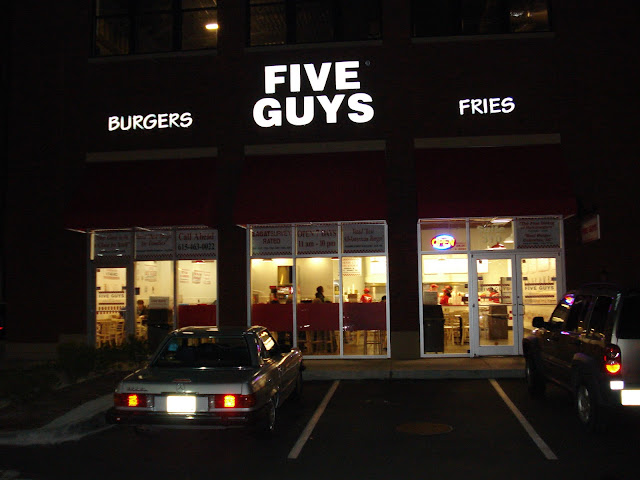 Fresh is really best word I can use to describe the food. The burgers are juicy and the flavor of the beef, seasoned perfectly, really shines through. This is the closest I have tasted to a homemade burger in a restaurant. 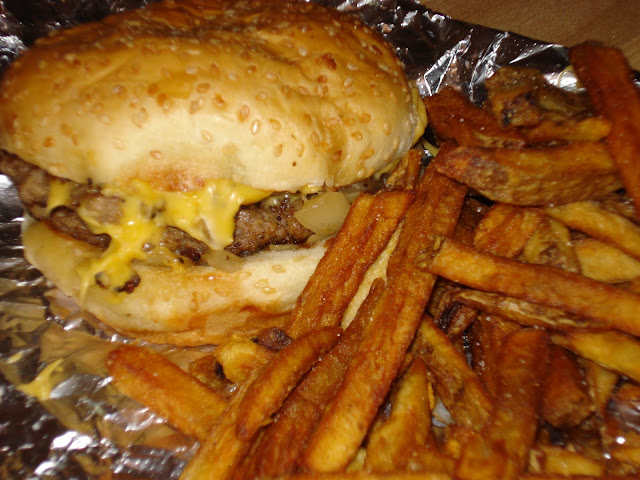 The burger-to-bun ratio is just right, and although I usually prefer a plain bun to one with sesame seeds, this bun is awesome, with just the right density and moistness. Although there are plenty of toppings to choose from, I usually get mine with just cheese and grilled onions - I think it complements the flavor of the beef just perfectly. Again, I should also mention the fries. These are some of the best fries I've ever had! They're cut fresh daily and twice fried with the skins left on. The seasoning is perfect. This is what french fries were meant to be.
If I have one beef with Five Guys, it might be the service. I have been to the Green Hills location a few times now, and have seen a noticable decline in courtesy and attentiveness of the employees there. Hopefully the management can nip this trend in the bud so it does not ruin what is an otherwise great restaurant.
Until next time...
Posted by BP at 9:47 PM

Ben,
I tried to go to Five Guys in Green Hills, but there was no parking whatsoever. I couldn't put up with the Green Hills traffic anymore, and I had to get out of there.

Nice piece. Great pics! Headed through Nashville this week. Your post might motivate me to fight some traffic for a Five Guys burger!

The mother of your newest Team Ulika member has been to the Red Robin in Boise, Idaho. She may not remember it, however, since she was six. Twenty-two years ago it was a relative novelty. The burgers were, as you said, highly dependent on the toppings for flavor and originality. Before there was a restaurant on every corner, it was a pretty good place to meet friends and have a burger and red wine.

I do look forward to a burger and fries at Five Guys. I hope the staff can loose the attitude and realize that even good burger joints come and go if the service is lousy.

A request for BP:
Hot Dog vs. Hot Dog

If you like Five Guys, then you will love Z Burger. It is springing up on the East Coast, primarily located in D.C. now, but it has a better menu with more options that include veggie burger options (*five guys still doesn't have this) and the largest selection of milkshakes.