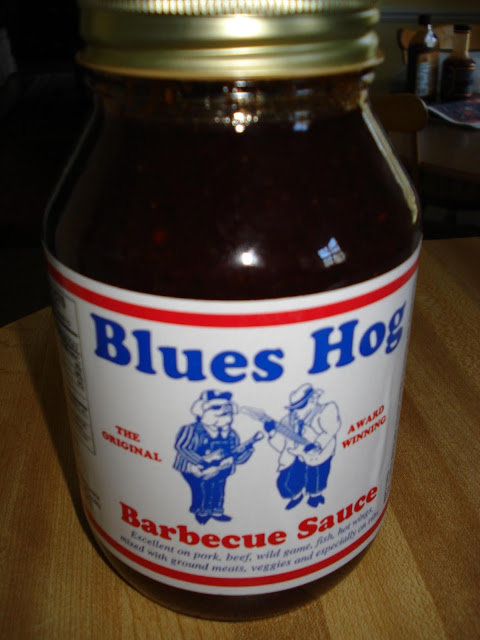 By now you might be thinking, "Gee, does BP actually like any barbecue sauce?" Well yes I do, and as a matter of fact, it gives me great pleasure to talk about one of my favorites this week - Blues Hog. I love Blues Hog. Ulika Head Cook Rob Marlow introduced me to the Hog, and after taking a small tupperware container of it home with me, I reported back to Rob that I thought I could eat toenail clippings if I had Blues Hog to go with it.
It's about as thick a barbecue sauce as you will come across, Dear Reader. It's almost the consistency of honey! And it's almost as sweet as honey, too. But if you've tasted your share of barbecue sauces, you know that it's easy to make a sauce really sweet. And it's not much more difficult to make a sauce both really sweet and spicy, which Blues Hog does to perfection, using just the right amount of heat to cut through the candy sweetness. But true greatness requires a certain something extra, and I'm here to say that Blues Hog has it. It's a unique and invigorating blend of spices which make themselves known right away, but flourish as the taste of the sauce continues to develop. After many tastings, I still cannot put my finger on exactly what gives this sauce its exotic twist. The ingredients tell us that tamarind is in the mix. And...anchovies?!! But I have a feeling the answer lies in the ubiquitous ingredient simply known as "spices". Whatever you're doing, Blues Hog, you're doing it right!
Grade: A
I had already written that review, Dear Reader, when we embarked on our epic Clarksville adventure. I could never in my wildest dreams have imagined that we would end up cooking right next to THE CREATOR of Blues Hog - Bill Arnold. As soon as we made the connection of who he was, I started geeking out. I have not been in the barbecue game long enough to have very many heroes, but THE CREATOR of Blues Hog is certainly one of them. I even had my picture made with him (he's the overall'd one). 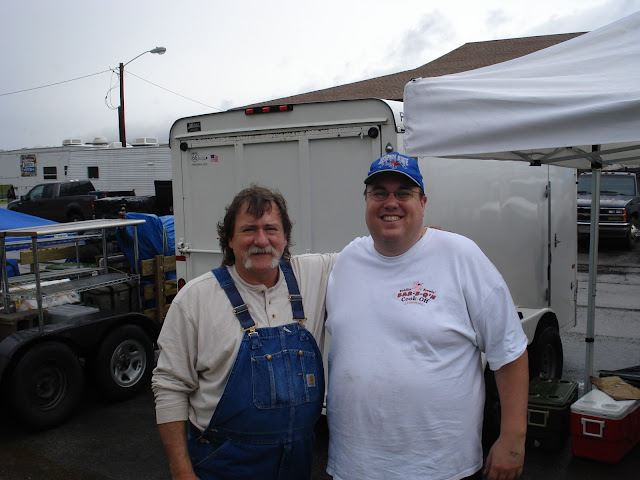 So at that point, the weekend was already a success. But what made it even better was that Bill, as Rob as has already mentioned, was one of the kindest, most genuine people we have met on the circuit, and it was a real pleasure getting to know him better over the course of the contest. He is truly the "salt of the earth" and I hope this wasn't the last time we run into him. In the meantime, at least I have his killer sauce!
Posted by BP at 11:28 PM

How's that raspberry chipotle sauce? Save me some because I never got to try it.

where do you find this stuff bp?

Sarah, I have never seen it in a store, but Bill told us that more and more stores are carrying it, so maybe it will pop up. You can definitely buy it on the website, though.

I became a member of a bbq list 3 years ago (the Smoke Ring) and Bill Arnold was on that list.

He gave a lot of advice and he is a good old Tennessee boy, a very nice man. I have never met him in person, but I have had many talks with him on that list.

You were lucky to meet a man of grace like him.

He is the real deal. And it is a small world.

I hope you don't mind, I used your toenail quote in a post about Blues Hog tonight. I linked it back to your blog.