Alright, I'm back. Things have been a bit hectic lately. Sorry I've deprived you of learning the relative merits of various barbecue sauces. Anyway, on to business. 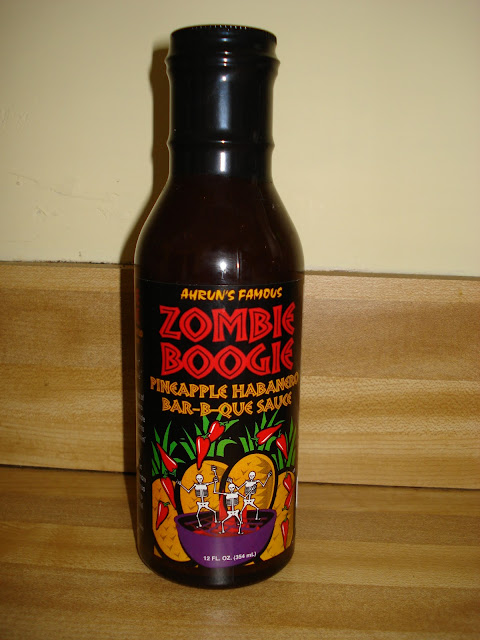 One of the fallacies of these barbecue sauce reviews is that they are essentially done in a vacuum, with sauces tasted alone on a spoon. And though that is really the only fair way to judge a sauce, we all know that in reality, barbecue sauce was made to be eaten with barbecue.
So if we think about barbecue sauce in context, just because a sauce is good by itself doesn't necessarily mean it will complement what it's going on. Sometimes a sauce, though delicious, is so overwhelming that it will dominate whatever it touches. Ahrun's Famous Zombie Boogie Pineapple Habanero Bar-B-Que Sauce is one such sauce. Don't get me wrong, I love this sauce. It's the color of a good mole and the consistency of steak sauce. It has a nice smokey aroma. And the best way I can describe its taste is to say that the sweetness and the spiciness have both been turned up to 10. This is about the sweetest sauce I have tasted in these reports, and also the spiciest. And it's an interesting sweetness, with essences of molasses and, of course, pineapple. It really has a great taste. HOWEVAH...
I cannot imagine putting this sauce on any barbecue that I thought was good, simply because there is no way you could taste anything else under this sauce. But on the other hand, the sauce tastes so good that if you were dealing with, say, bad barbecue, this sauce could turn it into something interesting. In fact, Ahrun's Zombie Boogie could be the beginning of a whole new category of barbecue sauce: 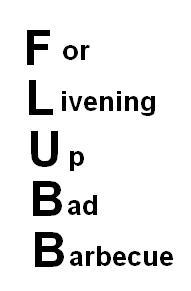 Henceforth, any barbecue sauce which is delicious, but too strong for its own good, shall be known as FLUBB.
Grade: A
Posted by BP at 4:14 PM

I really like this sauce also. I think the blend of hotness and sweetness was done real well. I am a fan of spicy foods all around. I would not rate this sauce so hot that it blows your head off, but if you like hot stuff this is a nice comfortable heat level. Of course, as you say, the taste is overpowering.

Now back to my search for a new bottle. LOL