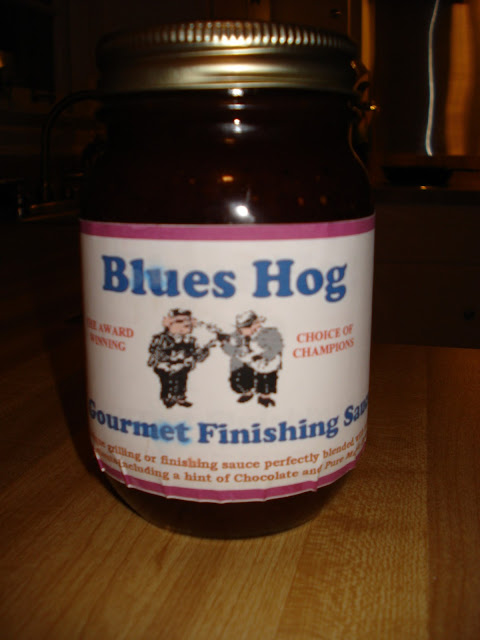 It's no secret that I'm a Blues Hog fan. Blues Hog Original is as good as any barbecue sauce I've ever tasted. Blues Hog Tennessee Red ain't so bad either. So imagine my enthusiasm when I learned about...Blues Hog Gourmet Finishing Sauce! Gourmet Finishing Sauce? Shoot, 'ol Bill has gone and gotten highfalutin on us!
The sauce smells and looks almost exactly like BH Original. The finishing sauce may be just a little bit more viscous, if that's possible. And upon first taste, the finishing sauce tastes very similar, too. But after the first second or two, this new product differentiates itself. First of all, the tamarind flavor seems to be more pronounced, giving this sauce a subtle sour component to balance the extreme sweetness. There also seems to be a salty, savory flavor which swells as the sauce lingers, yielding a certain richness. Is it anchovies? I cannot detect any of the chocolate or real maple syrup, which the label claims are key ingredients, but that doesn't stop this finishing sauce from having that characteristic Blues Hog sweetness. One final aspect that makes this sauce different is the lingering mild burn left on the palate.
Overall, for me personally, this sauce falls a bit short of the greatness of Blues Hog's existing product line. It is very sililar to the original barbecue sauce, which is a good thing, but the small differences do not strike me as improvements, but rather detriments. To me, the sour and savory elements only distract from what was an already great sauce. But the reality is that Blues Hog's worst sauce is still better than many companies' best.
Grade: B
In a related note, as I'm sure many of you have already heard, Bill Arnold, creator and pitmaster of Blues Hog Barbecue, has recently encountered some health problems. Specifically, doctors discovered a tumor in Bill's brain. In surgery, they were able to remove most but not all of the tumor. Having encountered all of this without insurance, Bill is now left with a large balance of medical bills and looming prescription costs. He is a single father of three young girls, without the means to cover such daunting expenses. If you wish to help, a relief fund has been established at a local bank in Bill's hometown of Perry, Missouri. Please send checks made out to "Arnold Family Fund" to the following address:
Perry State Bank
P.O. Box 378
Perry, MO 63462
Get well soon, Bill, and we hope to see you at a contest really soon!
Posted by BP at 3:37 PM

Labels: BBQ SAUCE OF THE WEEK, tweaking, why do bad things happen to good people

I was a member of a bbq list a few years back that Gary Howard has and Bill Arnold was on that list.

I have never met him in person only on the web, but he helped me more than anybody in the teaching of cooking bbq.

I would like to shake his hand some day...as he is a good old boy from Tennessee...

It seemed, that everybody on that list, had great respect for Bill.