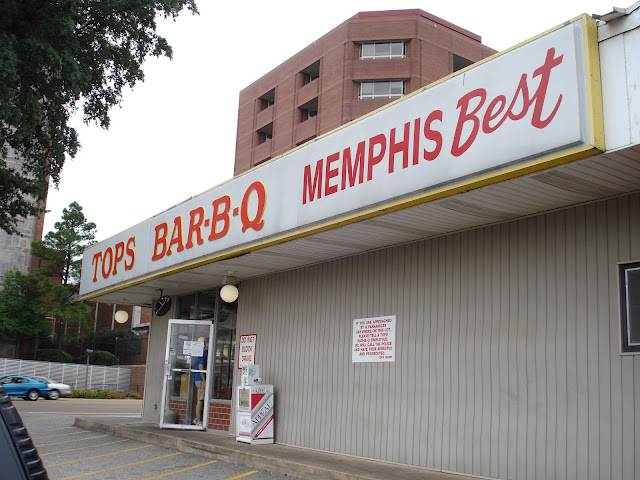 I was back in Memphis again this weekend, with my brother-in-law (Memphis native). After an awesome visit to Sun Studio, we decided to visit one of his favorite local barbecue restaurants - Tops Bar-B-Q. Tops has 14 locations in the greater Memphis area. My experience with the similar infrastructure of Whitt's here in Nashville has led me to be wary of such arrangements. But I was interested to learn in this interview by the Southern Foodways Alliance that unlike Whitt's, each Tops location has its own pitmaster and cooks its own barbecue on site. 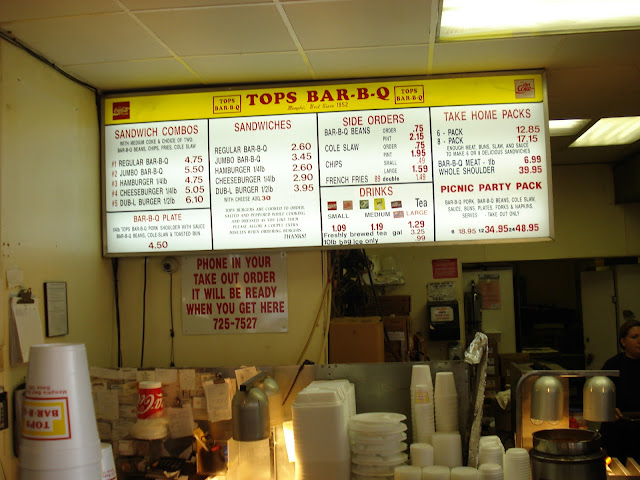 An interesting thing about Tops is that they don't do ribs at all, which is pretty rare in Memphis. It's only pork shoulder and hamburgers. I ordered a pork sandwich. 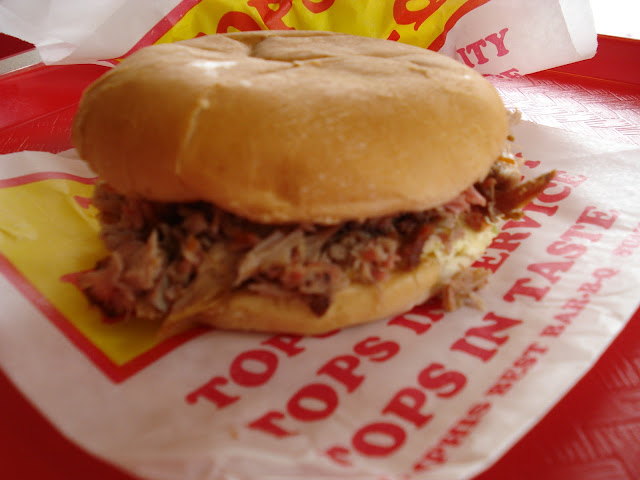 First of all, I dig the wrappers that the sandwiches come in - very Varsity. As for the sandwich itself - I dug it too! Right or wrong, I don't expect a chain to be able to compete with a single location locally owned place, but this sandwich is right up there among the best I've tasted in these reports. Of course it came topped with slaw, which is, in this case, more of a mustard-based version. And the barbecue sauce is more tangy and less sweet than most that I've tasted in Memphis. The meat itself is the star, though. Maybe I just got lucky, but this is the most bark pieces I've ever gotten on one sandwich. The result is a great textural contrast of tender and crispy. The thing about having a different pitmaster at each location is that there could be issues with consistency. So maybe at another Tops location, the barbecue sandwich would not have been as good. But on this day, at the location on Union Avenue, Tops lived up to its name.
Posted by BP at 9:48 AM

fantastic rundown of memphis bbq. this is a great resource i'll point people to when asked (and i'm asked frequently). i also pretty much agree with you, except i'd flop central and bbq shop's ribs. i love the shops.

rendezvous doesn't smoke their ribs...they grill them. all the flavor is in the rub. that's why you didn't see/smell/taste any smoke at the 'vous. incredibly inconsistent. on a good night, they are in my top 5. on a bad, i'd rather eat tofu.

if you are ever in southeast missouri, check out strawberry's in holcomb. best ribs ever and extremely consistent. they also do a pork steak that will knock you out.

Another great thing about Tops is the price. You can get bulk takeout at about $2 a person.

The locations on Summer are both great, as is the one on Getwell. If you're in need of a palate cleanser on your next visit, try the griddle fried cheese burger at Tops. It's one of the best in town.