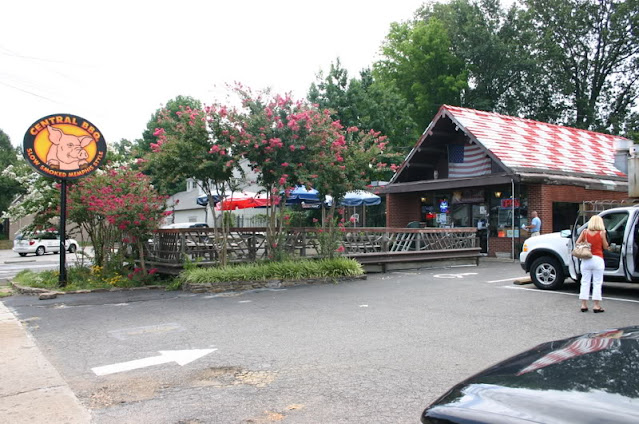 Central BBQ is decidedly different in atmosphere than most of the barbecue joints visited in these reports. It's a funky, family-friendly kind of place, where the employees wear tie-dyed shirts and classic rock is on the stereo. The location I went to on Central Avenue has a nice big deck out front. 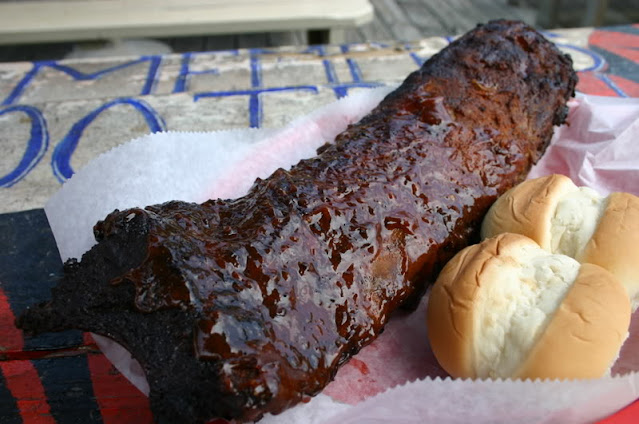 All I can say about the ribs is WOW! These are among the best ribs I have ever tasted - definitely the best I've ever had in a restaurant. I ordered them half dry and half wet. The dry half were very, very good. The exterior was nicely charred and flavorful, while the interior was like butter - unbelievably tender and had a great pork flavor. The wet ribs were simply out of this world. Take the dry ribs that were already great and add a sauce that perfectly complements - sweet and a little spicy. Wow! 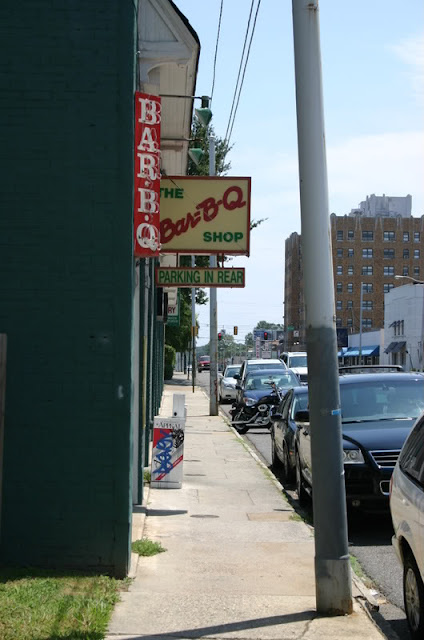 My next stop was not far away - The Bar-B-Q Shop. This place was again a little bit different than the norm, with table service, cloth napkins, and a full bar - not exactly what you'd expect a place called the Bar-B-Q Shop to be. The food, however, was exactly what I was hoping it would be - outstanding. 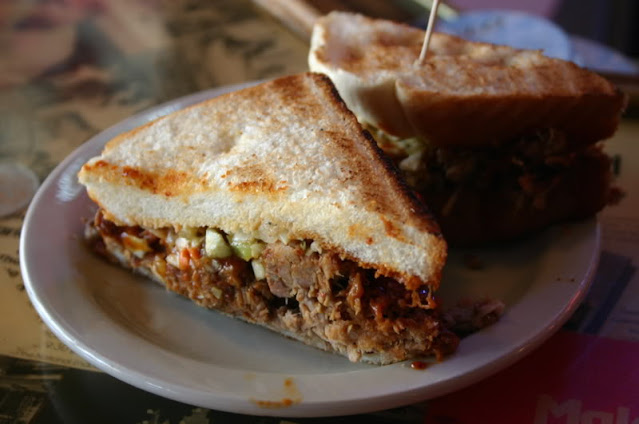 The sandwich at the Bar-B-Q Shop is a little bit different. It employs the same basic formula of chopped pork, barbecue sauce and slaw, but it's served on Texas toast instead of a bun. Also, the slaw is very unique, with big crunchy chunks of veggies, as opposed to the usual finely chopped hash. The result was that the slaw seemed to have a greater voice in the taste of the sandwich. It almost tasted...healthy. Overall, it was a nice change of pace and I enjoyed it - another excellent barbecue sandwich. 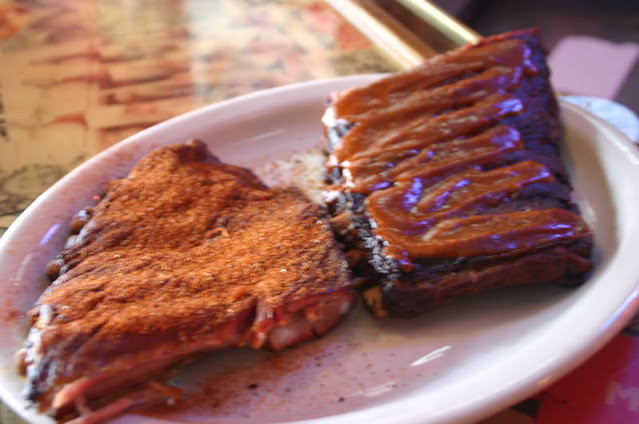 For the ribs, I again went with half dry and half wet. In this case, I liked the dry ones better. The rub that these ribs were finished with was heavier and slightly more coarse, resulting in a bolder, super-charged flavor. It was also slightly sweeter, which was nice. The ribs themselves were not cooked *quite* enough, and were a little bit lacking in smoke flavor. The sauce on the wet version just did not pack the same flavorful punch that the rub on the dry version did. Overall, these ribs were good to very good.

Next up is another of Memphis' legendary barbecue outposts. Charles Vergo's Rendezvous is probably the most famous barbecue restaurant in Memphis, and one of the most famous in the world. You've probably been there, haven't you, Dear Reader? They serve an ungodly number of people every day in this cavernous subterranean institution, and supplement that with a very successful mail order business. As years have gone by and I look objectively at this place, I think they get a lot of mileage from their old school atmosphere, which is admittedly awesome. It's all red checkered table cloths, waiters wearing bow ties and white aprons, loud blues music, and cold, cold beer. It is one of places that IS Memphis, and I still usually take first time visitors there, just for the experience. But as for the barbecue... 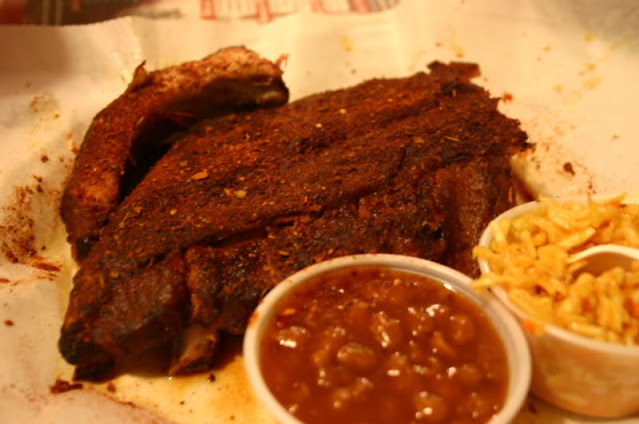 The specialty here is ribs, and they only come one way - dry. This is the quintessential Memphis dry rib. As critical as I have been and continue to be of Rendezvous' product, I think they really do have the best dry rub going. It's complex, with so many layers of flavor. And it's distinct - there is no mistaking it (I think it's the touch of cinnamon). Now...if only they could pair that rub with a rib that was cooked right. The ribs here do not appear to have any smoke on them at all. The interior color of the meat is stark white - no smoke ring - and there is no trace of smoke in the taste. All of the flavor comes from the rub. They are tender, and...dare I say...they taste good. But it somehow just doesn't taste like barbecue to me.
Posted by BP at 9:14 AM

Though I know you've reviewed a lot of places in Nashville and the surrounding counties, a concise list of places and their specialties in music city would be great. I've lost my shit more times than I care to admit when someone tells me that Whitt's is the best pulled pork in town. The trouble is, I never have a surefire retort when asked for a better suggestion.

I have favorite spots in Texas, North Carolina and Alabama but I am sadly very uneducated on what my home town has to offer when I have a craving for slow smoked meat.

Martin's BBQ in Nolensville is a good option. BP is much more versed in Nashville BBQ than I am so he can give you some more options. Of course you could always buy some bbq from me. Just send me an email.

I want to order 6 chicken thighs, 1 slab of ribs, 1 pound of pork, and 1 brisket. Please deliver to Cookeville on September 6th @ 12 PM! DoRagQ

I am working on putting something similar to this together for this blog, but for now, let me offer the following.

I think in general, the best barbecue in this area is found in the surrounding counties. I am a fan of Martin's in Nolensville, as Rob already mentioned. The Slick Pig in Murfreesboro and Smokin' Ed's in Smyrna are both very good. Also, Carl's Perfect Pig in White Bluff is good. And I also really like a place in Centerville called Papa Kayjoe's.

As far as the best in Nashville itself, I think the Trinity Lane location of Jack's is good. And I like Hog Heaven pretty well. I think Stroud's is probably the best of the chains.

When visiting a friend in Memphis several years ago, we ate dinner at Rendevous. The Razorbacks were in town for a football game at Memphis State and we had to wait almost 2 hours to get a table.

I liked the bbq o.k., but it IS different. It's not on my list of favorites, but if you're in Memphis and you've never been to Rendevous you really do need to go.

I always say that the Rendezvous has some of the best ribs around two out of every three times. I'm told the trick is to get friendly with a waiter who won't ever let you down.

From what I understand, they aren't really slow cooking the ribs, which separates them from traditional barbecue. Still, that dry rub makes up for any misteps from tradition.
The slaw is also some of the best around.