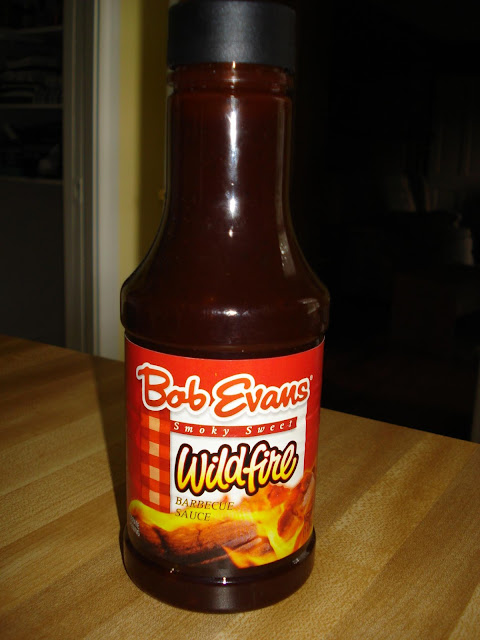 There aren't too many Bob Evans restaurants in the South, so my exposure over the years has been very limited. From what I can tell, it's kind of like the Cracker Barrel of the Midwest (but without the Country Store). It's not the kind of place that I would think would have a barbecue sauce.
But to be fair, I didn't come across this sauce via Bob Evans, but rather via Paul Hood. As Rob mentioned, we got to spend some time in Cookeville with Mr. Hood, who competes under the name of his flourishing charcoal brand, Big Briq. At his get together Friday night, Paul had some barbecue-related products for sale, and one in particular caught my eye - Bob Evans barbecue sauce?!! Well, I came to find out that Paul Hood actually created this sauce. After his sauce recipe was successful at a competition, the people from Bob Evans approached him and ended up using the recipe for their own brand of barbecue sauce.
And you know what? It's a dang good sauce! It's dark and thick, and has lots of finely diced onions in it. The dominant flavor is a brown sugar and honey sweetness, nicely tempered by some mild smokiness. And yes, as indicated by its name, Wildfire does have a late-arriving burn, which is not overpowering, but does linger. It's a great execution of sweet-and-heat, rounded out by a nice onion flavor.
Well done, Bob Evans, and well done, Paul Hood.
Grade: A-
Posted by BP at 6:47 AM

Hey BP, do you write off all of these BBQ sauces you buy during the year come tax time?

Hope to meet the whole team next year if I can do comps. I'll ask Rob next year where you all will be.

Look forward to giving you all a run for the money.

Haha...I should look into that, shouldn't I?