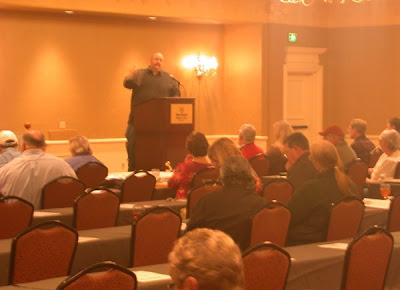 As part of the KCBS Banquet this weekend there was an open rules meeting. This forum allowed the membership to have input on any potential rule changes to the KCBS Rules and Regulations. The Tulip Grove Room was filled with about 80 attendees that included seasoned cooks, judges, reps and me. Rod Gray, the chairperson for the rules committee, was the moderator for the open discussion.

Here is the list of topics that were discussed, and a brief summary of what took place:

1. Allowing an individual to cook for more than one team at any one event. Rule 2

This topic was brought about from a situation that occurred at an unnamed contest in 2008. During this contest, a cook from one team cooked ribs for his team and cooked ribs for another team. As the rules stand today, this is not a violation. As you can imagine, this brought about many comments from the crowd. It started out fairly slow with some talk of differentiating mentoring and cooking. Then others discussed if tending a fire or running a turn-in box would be considered cooking. The discussion on this topic lasted for about 30 minutes and in the end it seemed that the membership was all in agreement that this type of activity should not be allowed. This issue will be brought up at a board meeting for the review of a possible rule change.

This issue has to do with multiple people cooking under the same name in different parts of the country. An example of this would be if I had someone cook under the name Ulika in California one weekend and I cooked in a local contest the next weekend. There is already a rule that says that the same team can not compete in different contests that occur on the same date, but nothing about this scenario of multiple weekends. After a brief discussion it was decided that the rule did not need to be changed or reworded.

3. Disconnecting propane from a legal pit during the cooking of contest meat. Rule 5

Of course there is an existing rule stating that teams can not use propane to operate their pit. The KCBS does allow the use of propane to start a cooker, but any propane lines that are connected to a cooker must be shut off. The creation of a new rule would require the hose to be completely disconnected from a pit. The discussion quickly turned towards vendors who will use propane to cook their meat for vending, then continue to use it when cooking their competition meat. However, a few members mentioned that their rigs are hard piped and having to disconnect the pipe instead of using a shut off valve would cost them money. After that was mentioned, the membership decided that this amendment did not need to be added to the rules, but having contest reps periodically check a vendor's rig might be a possibility.

With a couple of instances of this rule being violated last year, I thought that this subject might bring about several comments. However, the focus was more on the wording of this existing rule to insure that a competitor would not be violating this rule by simply having a radio on at a low volume. The current rule is as follows:

Excessive noise generated from speakers or public
address systems. (Quiet time will start at 11:00 p.m. on
contest nights and will last until 7:00 a.m. The use of
radios or amplifying equipment will not be allowed
during this time period.)

So it was quickly agreed upon that this rule needed to be modified to have excessive added before "The use of radios....". The fear was that technically a team could be disqualified if a radio was on after 11 pm, but this is ultimately up to the discretion of the contest reps.

5. Review of the sculpting rule wording. Rule 13
Here is the wording of the existing rule:

Meat shall not be sculptured, branded or presented in a
way to make it identifiable. Rosettes of meat slices are not
allowed. (Violations of this rule will be scored a one (1) on all
criteria by all six judges.)

This topic went back and forth with members debating whether or not molding and sculpting are the same thing. All of this really came about from teams using a bowl or mold (similar to that of an ice cream scoop) to portion out the pork entry. Most members (including myself) were under the opinion that if a cook wants to stretch the limits, then they are taking the risk of potentially being disqualified. As the discussion continued, it was determined that no language could make the rule any clearer. So it was decided to leave the rule as it is today.

6. Sanitary conditions in the judging area.

The reason that this potential rule change was brought up was because of a a frightening incident that occurred at a contest last year. It seems that someone thought that it would be okay to use the porta-john and then return to the judges table without washing their hands...then proceed to reach into a pork box with their hands and pull out an entry. This obviously would leave the judge seated next to them with a particular dilemma as it became their turn to select a portion from the box. It did not take long for everyone to agree that this was completely unacceptable, but that it was ultimately the responsibility of the organizers to provide either a fork or tongs and an adequate washing station.

7. Presentation of chicken category for judging.

There were three items that were brought up in this talking point. The first was about chicken salad. Yes, technically under the letter of the law, chicken salad is legal. A team can legally cook their chicken, chill it down, cube it, and then combine it with a "white bbq sauce" that consists of mayonnaise and celery. Most people in the room were stunned to learn that this would be a legal entry, but everyone seemed okay with someone willing to try it in a contest. As Tiger Woods says, "I like my chances".

Based on another incident in 2008, the next area for discussion was regarding deboning a chicken thigh and stuffing it with chopped white meat. Does this violate the "stuffing rule"? The answer is no. It was also revealed that the team that did this placed 3rd overall in chicken when this was done. Everyone agreed that this action was within the rules and no rule change was needed.

The last item discussed in regards to chicken presentation was about skin being removed and cooked apart from the chicken. This is usually done at really high heat to create crispy bites of chicken skin. This is not a common practice, but I think that more teams are trying it. While some found it to be outside of the "spirit" of bbq, most did not have any issue with it. It was decided that no rule changes needed to be made on chicken presentation.

After all was said and done, the only two issues that will be presented to the board are issues #1 and #4. With the overwhelming support of these issues by the membership, I am sure that they will pass right along through the board and will be accepted as new rule changes.

I didn't go to the board meeting on Friday night, but I will be reporting on the banquet ceremonies that take place on Saturday.
Posted by Unknown at 1:54 PM