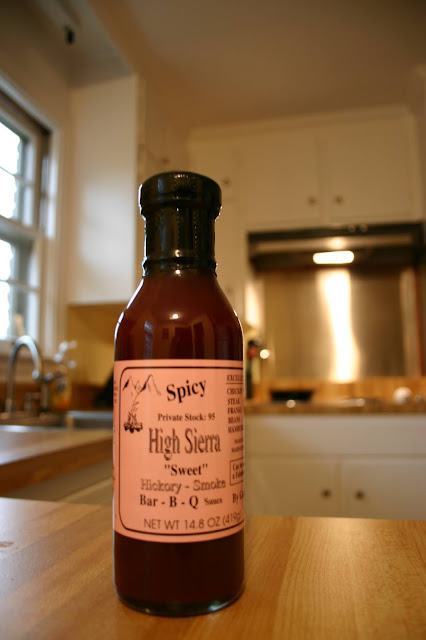 George White began experimenting in his kitchen with a barbecue sauce recipe in 1994. One year later, he was selling his sauce to local grocery stores in the foothills of the Sierra Nevada Mountains in Northern California. But after a painful divorce in 1998, George gave up on his sauce business and moved to Las Vegas. Nearly ten years later, at a poker game, George met a woman from Tennessee who shared his interest in barbecue. After tasting a batch of his sauce, she offered to go into business with him. Thus, High Sierra Enterprise, Inc, which sells barbecue sauces and rubs - with headquarters in Las Vegas, Nevada and Murfreesboro, Tennessee.
The bottle that I ended up with is the "spicy" version of the sauce, but it's hard to imagine that the "original" could be any milder, as there is really no heat to speak of. What this sauce does have a lot of, as announced in one of the scattershot phrases on the label, is hickory smoke flavor. In fact, it's one of the smokiest sauces I've had. The smoke first makes itself known in the aroma, then in the flavor is joined by a rich brown sugar and molasses sweetness, as well as a prevalent onion flavor. There are bits of chopped garlic floating in the dark burgundy colored sauce, which is fairly thick.
Grade: B 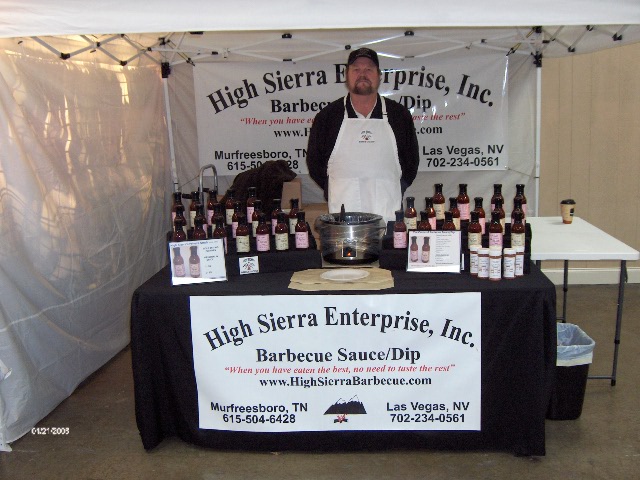 Is this sauce distributed in stores locally?

Not sure. My uncle gave me this one. Not sure where he got it.

To BP : This is George from High sierra barbecue, I came across this website and found it to be very flattering. to answer the persons question about if the BBQ sauce can be found around Tennessee the answer is yes, can be found in Murfreesboro at Jr's food land and in Smiths market in La Vergne Also at the Nashville Flea market monthly. WWW.highsierrabarbecue.com

Many Thanks BR. George White

Hello BP,
This is George White again, just letting you know as of Jan - Feb 2010 High Sierra is now a Award Winning barbecue sauce in Lake Land pigfest Florida and hines Florida it took both 1st and 2nd place, you might want to take note of this outstanding cook off win.

Mr. White... Greetings from Seymour/Knoxville. SUPER sauce, tons of flavour but not one of those as makes you think of napalm as so many "scalp-sweaters" do. Yours really adds a wonderful warm flavour to the barbecue without masking the meat's own flavour with an overpowering cayenne fire. Wonderful discovery at the Knoxville Flea Market. Hope to see you in December!