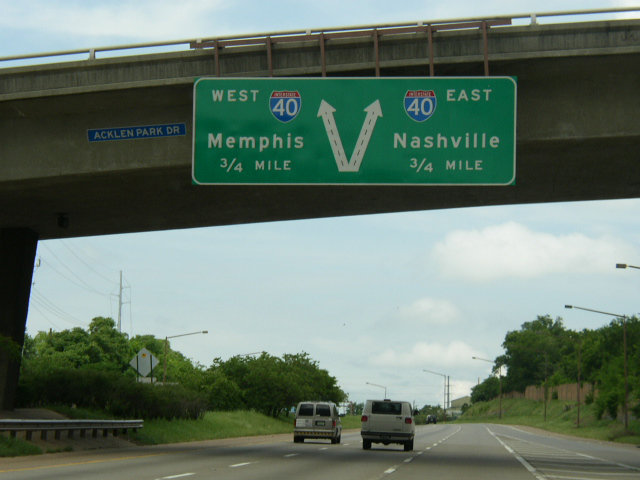 A mere 200 miles separate Nashville and Memphis - about a three hour drive. But culturally, they are further apart than that. I won't go into all of the differences here. For our purposes, I'll keep it to this - Memphis is known as a "barbecue town"; Nashville is not. Thus it's no surprise that a couple of Bluff City establishments have seen fit to set up shop in Middle Tennessee and attempt to show us how it's done. 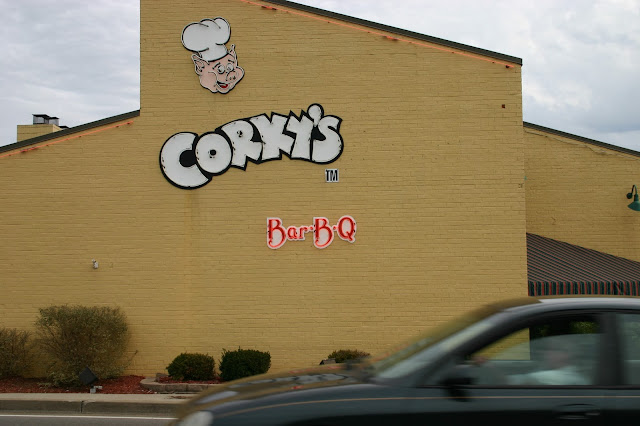 To be fair, Corky's has actually opened franchises throughout the Southeast. There are a total of 20 locations outside of the greater Memphis area, and three of them are in Middle Tennessee. The Brentwood location was the first to open outside of West Tennessee. It's been there now for over 15 years, which makes it practically ancient by Brentwood standards. It is a full-service restaurant, complete with waitstaff and cloth napkins. Although I have been eating at the Brentwood Corky's most of my life, the original location on Poplar Avenue in Memphis was new to me when I visited there last year. 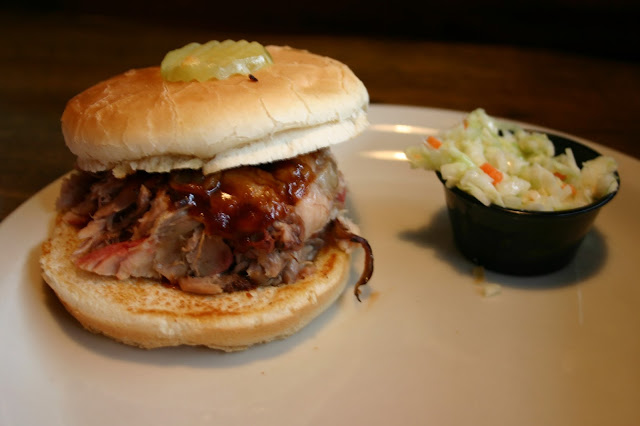 The pulled pork sandwich came pre-sauced and with the slaw on the side. The pork came in big meaty chunks, which were a little tough - not cooked to the same tenderness as the Memphis location. Flavor-wise, the sandwich was leaning heavily on the barbecue sauce, because the pork was relatively bland, and so was the slaw. 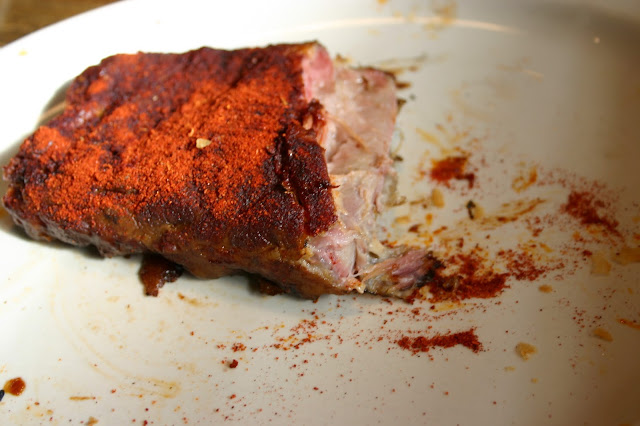 The "dry" ribs were a little better, though every version of this Memphis specialty seems to pale in comparison to the Rendezvous', just because their rub is so unique and awesome. By comparison, this generously applied rub had very little depth of flavor - it just tasted salty. Great cut of meat, though - well trimmed, with lots of meat on the bones - and well cooked.

As you can see in this Southern Foodways Alliance piece, a big part of Corky's M.O. right from the start was offering quality barbecue in a "safe" location.

"Everybody thought that when you wanted good barbecue you had to go into a bad neighborhood- in ghetto or it's not going to be good barbecue. Well, like he said 99% of the people that want to eat the barbecue don't want to have go to the ghetto if they don't have to."

Perhaps their standards for quality have declined through the years, but they have remained successful by bringing the "barbecue experience" to the suburbs - and the Brentwood location is no exception. 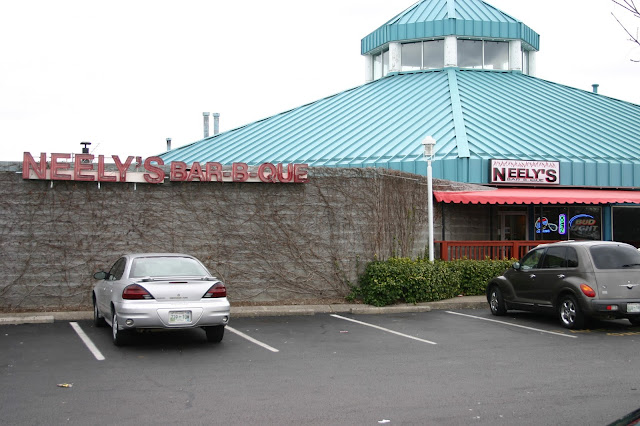 My Neely's experience in Memphis was considerably better than the experiences I have had at their Nashville location. 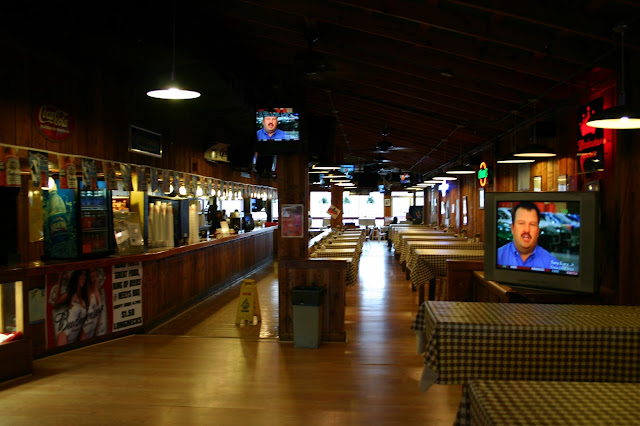 While the atmosphere in their Memphis branch was great, I have always loved the vibe of the Nashville location, despite the fact that it is in Fountain Square. It's in the space that once was either Hooters or Fat Tuesday, I can't remember which. Probably Hooters. Anyway, it's a large open space, with a covered deck in the back, overlooking the lake. The staff are always friendly and the blues music is always loud. 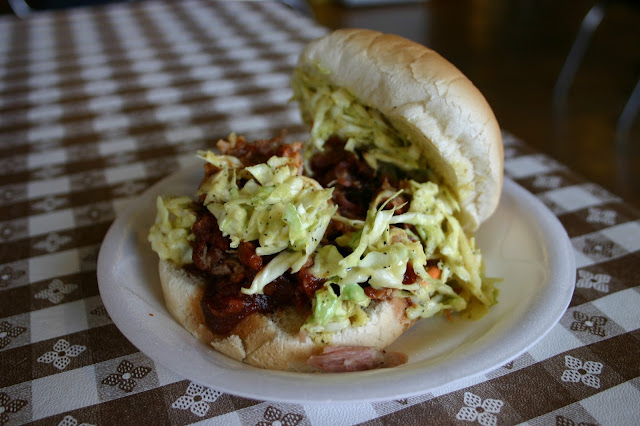 One thing that I specifically wanted to try in this visit was the chopped pork sandwich. In previous visits, I had ordered the ribs, usually with disappointing results. The pork sandwich in Memphis was a winner, though, and I wanted to see how this one would stack up.

It stacks up very well. Excellent pork, not just pulled but chopped - had great flavor and great texture. The barbecue sauce at Neely's is not too sweet, relying more on vinegar, ketchup and Worcestershire flavors to enhance the pork. The slaw, as you can see, was generously applied and really topped things off nicely. The slaw, rather than the barbecue sauce, provided most of the sweetness. And the slaw was esepcially fresh and crisp, which added to the wonderful textural variety of this sandwich. This is the best Memphis-style sandwich that I have had outside of Memphis. 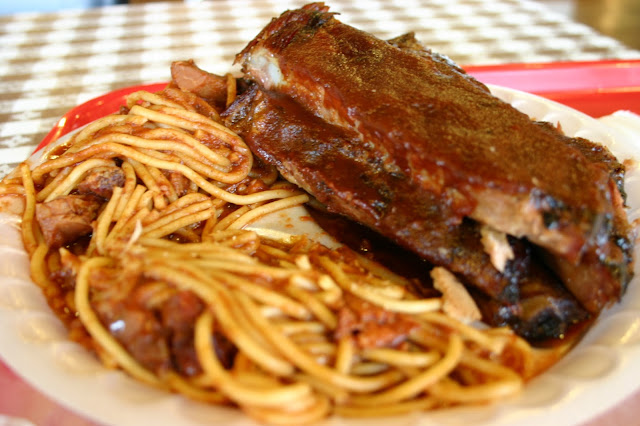 The ribs, unfortunately, failed to capture the same magic of the original location. They were, as they have usually been, soggy, overcooked and flaccid, tasting as if they had emerged from a crock-pot full of barbecue sauce.

You may be wondering what the heck that spaghetti is doing on the plate. But that's not just any spaghetti, Dear Reader, that's barbecue spaghetti - another Memphis specialty. It has plentiful bits of chopped pork in a sauce that's part spaghetti sauce and part barbecue sauce. You can order it as an entree or a side item. It's a fun change of pace that is actually pretty tasty.

Wish Central BBQ would branch out here. Pulled pork, ribs, and my "depression era" fave - their bbq bologna sandwich - are the best.