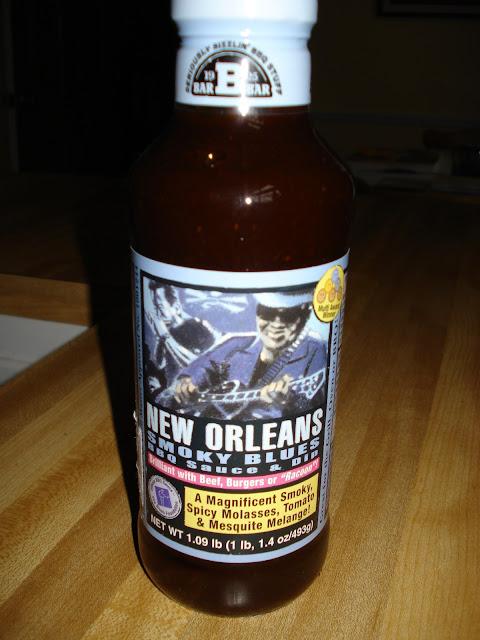 If ever there was proof that "New Orleans" gets thrown around like so much cheap confetti in the marketing of food products, this week's sauce is it.
First of all, it is kind of bizarre to me that the Big Easy has been co-opted as a locale that invokes barbecue greatness. Don't get me wrong, New Orleans is a great food town, but for barbecue? I don't know.
The product in question is made by a company called Bar-B-Bar, which hails from - wait for it - Kent, England. Although the Bar-B-Bar logo says "1925", the story on their campy website implies that the company is much younger than that. The story goes that GrillMaster, the anonymous founder/creator, was bored at a South Coast "beach barbi" and decided that better barbecue sauce was the answer. Thus, a line of sauces that has apparently been successful on that side of the pond - they claim to be "Europe's leading award-winning gourmet barbecue brand."
Unfortunately, this is not a sauce that New Orleanians should be proud to have their city associated with. It looks like it could be promising - thick and dark, with lots of spices suspended in it. But even a quick whiff of the stuff is enough to tell that something is not right here. The taste is overwhelmingly of soy sauce, with a smokiness and a molasses flavor that only intensify the soy sauce flavor. The overall essense of the sauce is savory, almost like...dare I say...Marmite?
Grade: D
Posted by BP at 10:52 PM

I love the website. My favorite is the photo on the home page - the swanky STOCK PHOTO of trendy twentysomethings who are GRILLING OUT with eight bottles of sauce floating in front them. Could it be that these bottles were photoshopped in?

If I may offer a couple of suggestions (or even a few), I might suggest you try BluesHog and their TN Red. Both good in my opinion. Also, when you are in Tuscaloosa to visit Dreamland, visit Dreamland just to see what all of the hype is about and then have your meal at Archibalds in Northport...also buy a gallon of their sauce. It is, in a word, good. Report back...I would love to hear your take on it.

GriffinGaDawg,
first of all Go Dawgs.

check out our review of Blues Hog
http://www.ulikafoodblog.com/2008/04/bbq-sauce-of-week-blues-hog-barbecue.html

I love the original Dreamland. I refuse to go to the chains because I know they can not live up to the original. I have never been to Archibalds because I always go to Dreamland when in T-town. Next time I will have to go to both.

It seems we have similar lives...a love of Que, the dawgs, bge (I'm not man enough for a stumps yet), both live in Nashville and both had sons within three months of each other. Lastly, I have a fascination with trying different dry rubs and sauces. My wife gave me one cabinet shelf to store my rubs/spices...I contend it is hardly enough.

This is getting weird.

does anyone know where to get this sauce??? ive been looking all over the net to find a place to order it, with no luck.... thanks in advance for any help!!!!!