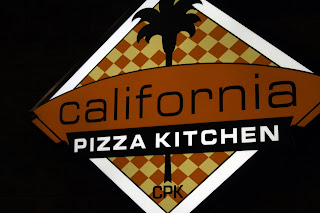 California Pizza Kitchen began in 1985 when two fancy Beverly Hills lawyers hired Wolfgang Puck's pizza chef to create an authentic California-style gourmet pizza menu. Their restaurant featured a swanky, 70-seat dining room and an open kitchen built around a large wood-burning oven. Presenting barbecued chicken, duck breast, rabbit sausage, roe, scallops and more, the upscale take on the comfortable staple was a huge hit and the restaurant continued growing throughout the the 1990s, attracting the Pepsi Company and other big name investors to begin a vigorous expansion campaign. With backing from Kraft foods, they began distributing a line of frozen pizzas across the United States. CPK then went public in 2000 and currently has around 250 restaurants including 27 international locations with their most recent opening in Dubai.

After hearing about it for years, California Pizza Kitchen finally marched into the Hill Center in 2007, bringing its imaginative line of hearth-baked pizzas to Nashville.

A California pizza typically includes a thinner, sourdough crust, but it's the fresh, exotic (and traditionally local) toppings that define the style. CPK serves a wide variety of wood-fired pizzas with non-traditional toppings such as pear and gorgonzola, Jamaican jerk chicken, Japanese eggplant, mango and tandoori chicken, and the most popular Original Barbecue Chicken Pizza. Since I've stuck to plain, traditional toppings for my pizza reviews thus far, we ordered our pizza with half pepperoni and cheese and half "the works." Our pizza arrived piping hot, sliced into six pieces. 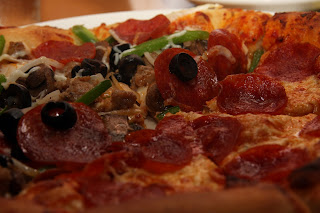 Note: I'd love to hear your thoughts on the exotic pizzas. What have you tried? What do you recommend?

The crust was thin with a very crisp, crunchy exterior and soft, most interior. There was a very slight sweetness in the dough, but mostly a fresh, natural "bready" taste. As someone who is very used to noting smoke flavor in her food, I can't say that I really detected any of the smoky flavor in the crust that I had been told to expect from a wood-burning oven. As the open kitchen offers a direct view into the oven, the Mr. and I spied the logs inside the oven and oddly didn't notice them changing size over the course of the evening. I could certainly be mistaken, but I only know of one kind of log that doesn't burn down.

But anyway...the traditional tomato sauce was very light and very sweet, thinly brushed over the crust. The cheese was good, nothing dazzling, but good. It had a little parmesan flavor mixed with the mozzarella, sitting firmly over the sauce with almost no pull away. The standout on the plain half of the pie was the pepperoni. It was crisp, masterfully sliced, juicy and flavorful in the center with crunchy, perfectly cooked edges. The "works" half included the pepperoni as well, along with sweet Italian sausage and fresh, crunchy veggies (mushrooms, onions, black olives and green peppers). 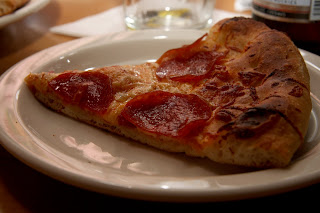 CPK certainly offers a trendier, more upscale dining experience than that of your standard pizza parlor. The open dining room was decorated purposefully and tastefully with a defined lighting scheme. The crowd was certainly Hill Center-chic sophisticated and there was a noted lack of toddlers and cheerios. There was a brief wait on the Friday evening when we visited, but those who rolled in just five minutes after us could have waited 30 minutes or more as the restaurant was completely packed. Our waiter (Jared) was attentive and very friendly as was the manager who stopped by as we finished our meal. 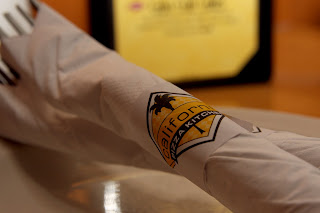 To be fair, the more exotic toppings are what makes CPK stand out. But in general, the traditional topping pizza was pretty good. It felt a little bit like they offered it only because they had to though, like the hot dogs and mac and cheese found on the bottom corner of the menu at other restaurants. The hunt for the best slice carries on...

Got any suggestions for places that I should cover? Let me know!
Posted by the mrs. at 9:42 AM

I am a huge fan of CPK!! I've always gotten the BBQ chicken pizza and it is even good frozen from the grocery store! I still love your Pizza reviews!