BARBECUE BANDS: Clue and the Honkytones 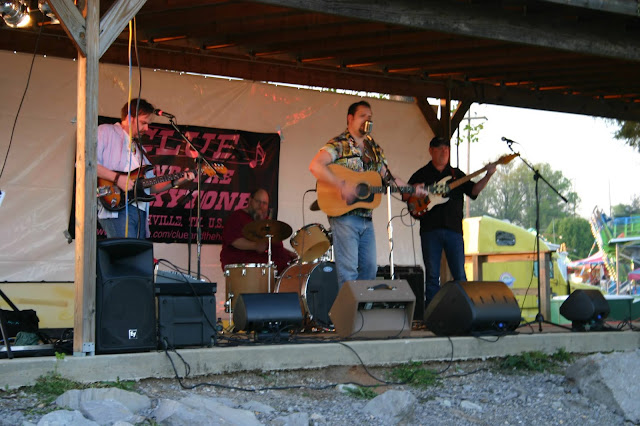 Clue and the Honkytones
High on the Hog - Winchester, TN
April 17, 2009
________________________________
I.
Folsom Prison Blues
Don't Rock the Jukebox
Love Me
Silver Wings
Country Club
Your Cheatin' Heart
Are You Sure Hank Done It This Way?
Little Sister
Luckenbach, Texas
?
...went to get a corndog, missed a few songs...
?
Kaw-liga
Blues Man
Jailhouse Rock
II.
Guitars, Cadillacs
Two of a Kind, Workin' on a Full House
One Night
Whiskey Bent and Hell Bound
Don't Close Your Eyes
???
???
Okie from Muskogee
These Boots Are Made for Walkin'
Luckenbach, Texas
Theme From The Dukes of Hazzard
Dim Lights, Thick Smoke
Highway Patrol ->
White Lightning
Silver Wings
If I Said You Had a Beautiful Body, Would You Hold It Against Me?
E:
The Fireman
Your Cheatin' Heart
Swingin'
FINAL TALLY:
Elvis: 4
Waylon Jennings: 3
Hank Williams: 2
Hank Williams Jr: 2
Merle Haggard: 2
Throw in Johnny Cash, Garth Brooks, George Strait, George Jones, Dwight Yoakam and Travis Tritt and nothing newer than 1991, and that's a pretty good set, isn't it? Clue himself had a voice that was very reminiscent of Waylon Jennings, so the Waylon songs worked especially well. And the band was kind of similar to the Waylors, too - efficient and confident in their playing, and very tight. The guitarist was especially great. My only real complaint was the repeating of songs. I would think that a band with a regular gig on Lower Broad would be able to fill a two hour time slot without repeating songs. But overall, this band was a nice change of pace from the classic rock norm.
Posted by BP at 8:45 AM

Clue and the Honkytones said...

Thanks for including us in your blog!Appreciate the kind words very much.Would just like to clear up your comment regarding the repeating of a few songs.As we gladly play requests,and some folks who came later than others had requested songs played earlier in the first set.Let me assure you with a song list of over some 1,000 songs,we don't have to repeat,however on occasion we do so to keep our fans happy.Please feel free to swing by The Wheel any Sunday and don't be shy to bring some of that delicious Bar-B-Que!We had a great time and hope to play for y'all again soon!

Clue and the Honkytones
(Nashville,TN. U.S.A.)