BBQ IN THE NEWS: If it doesn't walk like a duck... 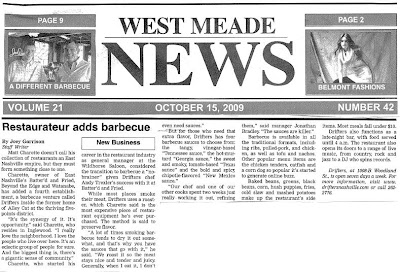 There was an article in last week's West Meade News, of all places, about Drifters - the new barbecue restaurant that has recently opened in East Nashville. While this site will of course reserve final judgement until we've had a chance to dine there, some of owner Matt Charette's comments in the article raised some red flags.

While most places smoke their meat, Drifters uses a roaster, which Charette says is the most expensive piece of restaurant equipment he's ever purchased. The method is said to preserve flavor.

"A lot of times smoking barbecue tends to dry it out somewhat, and that's why you have the sauces that go with it," he said. "We roast it so the meat stays nice and tender and juicy. Generally, when I eat it, I don't even need sauces."

Listen, I have absolutely no problem with roasting meat. You can make a pretty strong bird that way. But...is it barbecue? The "definition" of barbecue is something that will ultimately never be agreed upon. I realize that for the majority of Americans, barbecue is anything that has barbecue sauce slathered on it. And I begrudgingly accept that. But it seems to me that restauranteurs, especially ones in the South, where barbecue is king, should know better.

But who knows - maybe I'm the one who needs to get wise? Maybe my own personal definition of barbecue, which involves slow-cooking and using wood - is too narrow. After all, one of the most famous barbecue restaurants in the world serves ribs that don't fit that definition. You will notice, however, that Rendezvous never refers to their product as "barbecue", but rather "charcoal-broiled ribs" - the "barbecue" nomenclature has been applied by the general public. But I digress.

So what do you think? Is roasted meat barbecue? What are the unofficial requirements for calling something "barbecue"?
Posted by BP at 1:19 PM

Here in the suburbs of Washington D.C. we have a pretty lenient definition of barbeque. There are barbeque restaurants like Rocklands that do things the traditional way, low and slow with aromatic wood. There are also some great Peruvian chicken joints that do things "barbacoa" style. And unfortunately there are also restaurants that roast their meat with artificial smoke (for shame!).

But you guys down in Nashville have to be more strict, if only to preserve your reputation!

Possibly the most important question is what is this restaurant owner doing wrong that he is getting dry smoked meat? I've been smoking meat in my backyard for a few years, using internet sites and blogs to learn the tricks and tips and I've never ever had a dry rib or wing.

Smoked, low-n-slow barbecue is the "purest" version, and all other iterations are just bastardizations by degree.

There should be a "heritage food" type of designation for true bbq prep... kind of like how Italy has guidelines for what is consider "true" prosciutto de parma.

I ate at Drifters lasy week with a few friends who collaborate with me on my blog. In our review of the place, penned by my friend, he left the description of the brisket to me and this is what I had to say:

"Nobody who’s ever spent time in Texas eating real brisket would be satisfied by this offering. First of all, it’s not even true barbecue; our knowledgeable waiter told me that like the pork, the brisket is slow-roasted all day long. While I appreciate the work that goes into a slow roast, you should call it what it is – a roast. Maybe you could get away with passing it off as brisket in some other part of the country where people don’t know anything about barbecue, but doing this in a town like Nashville where there’s already so much good barbecue around is borderline shameful. So far as slow-roasted beef goes, though, it’s got decent flavor."

The pork didn't fare nearly as well, either. While there's something to be said for the flavors at Drifters, barbecue that place ain't.

No barbeque if there is no smoke ring. The Ring is the thing!

Old Abraham Lincoln saying, "How many legs does a dog have if you count the tail as a leg? Four. Calling a tail a leg, doesn't make it a leg."

I read somewhere that barbecue is "one or another of several approaches to cooking one or another type of food, usually meat, except when it is something else, which make use of one or another cooking technique that most often involves smoke, though not always, and in which a sauce of one sort or another plays either an essential, a prominent, or a negligible role. Barbeque has a nearly fanatical following in North America, particularly in the southern United States, where it carries alore rich in history, culture, and the sort of factionalism that often leads to gunplay."

My particular take on this is that you don't barbecue anything. Pork, and sometimes beef or mutton, but mostly pork, cooked over wood, usually hickory, results in Barbecue(with a nod to Dennis Rogers in Raliegh). Oven roasted results in roast.