Louisville offers a wealth of local restaurants across every ethnicity and style. The streets are lined with unique bars, restaurants, bakeries, delis, and bistros in lieu of Logan's, Applebee's, Ruby Tuesday's and Chili's. And while Louisville also houses the world headquarters of Papa John's and Pizza Hut, there are an incredible number of local pizza parlors. After asking around and consulting Where The Locals Eat and the local alt-weekly, we decided to go with the 2009 people's choice winner. 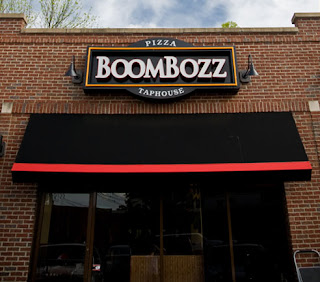 In 1989, Tony Palombino opened Boom Bozz Pizza in Louisville. What began as a modest little parlor has evolved into a dominant force in the city with four packed locations where various local and international awards line the walls.

Boom Bozz, of course, does it all from scratch with a very thin and tangy tomato sauce base coated in 100% mozzarella cheese. The dense cheese has little pull away and gets a bit greasy, but boy is it tasty. The pepperoni surprises with its flavor and spice, building upon itself with a little heat as well. The crust is a little disappointing for a place that has everyone falling at its feet - it's a basic hand-tossed crust that's cooked well but has little to no flavor. 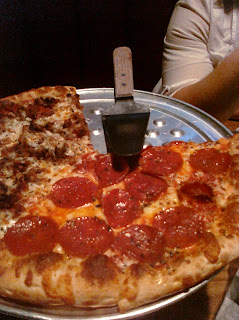 While I do it pepperoni-and-cheese-only-style for these reviews, it's clear that Boom Bozz brushes its shoulders off with its specialty pizzas. The D'Sienna (International Gourmet Pizza Winner) has a tomato cream sauce, mozzarella, asiago and romano cheeses along with fresh chopped spinach. The Pollotate (2008 International Pizza of the Year) has marinated grilled chicken with roasted potatoes and onions on a garlic olive oil crust with asiago and mozzarella. Boom Bozz offers starters (the fried ravioli is excellent), salads and sandwiches as well along with over 30 microbrews (the Magic hat has more than just a hint of apricot) from its new "Ice Bar" at the Bardstown Road location.

For the exotic specialty pizzas, I'll give it to you Boom Bozz...but c'mon Louisville, the hand-tossed pepperoni pizza just barely snuck above average.


While my pizza reporting will continue to be sporadic throughout the remainder of the year, the quest for the best pizza isn't dead! Got any suggestions for places that I should cover? Let me know!
Posted by the mrs. at 7:13 AM

In my opinion Wick's Pizza is the best pizza I've ever eaten in Louisville and around! I wish the locals would have steered you in that direction :)!!

A few did! I should have talked to you before! We were deciding between the two, but the beer at Boom Bozz lured us in. It will deifnitely be Wick's next time...

I'll second Wick's! It's SOO good. But then again I've never been to Boom Bozz! Luckily I have a friend in Louisville, and it's due time for a visit.

Great post! Louisville is such a great restaurant city. I hope you made it to the Homemade Pie & Ice Cream Kitchen while you were there!

we did make it too the Homemade Pie & Ice Cream Kitchen. I had a pumpkin cheese cake. so good.