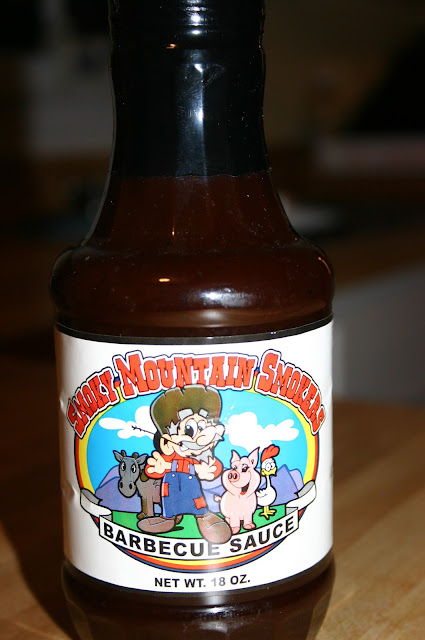 Like many that we've reviewed before, this is a sauce by a competition barbecue team - and one of the best. Smoky Mountain Smokers, from Sevierville, Tennessee, have come on strong in the last few years, culminating in a 5th place finish in the overall KCBS standings in 2008. We often compete against them at contests here in Middle Tennessee, and to say the least, they are a worthy adversary.
And wow, do they make one heck of a sauce! It definitely has shades of Blues Hog, with its heavy sweetness and savory essence of tamarind. But it's definitely its own sauce. It's not quite as thick as BH, and there are subtle but significant differences in flavor. SMS' sauce has molasses higher in the mix, as well as prevalent notes of mustard, garlic and cumin. The pronounced cumin flavor plays especially well with the sweetness of the sauce. The sauce leaves behind a nice mild lingering burn that is also a nice complement to the sweetness. Overall, an excellent, very tasty sauce!
Grade: A
Posted by BP at 5:41 PM

WE JUST LOVE TO BBQ ALL YEAR ROUND!!! My name is BARBI SLICK and I'm from Portland, Oregon, and my husband and I just LOVE to BBQ on our TRAEGER BBQ's!! We've created 2 AMAZING BBQ sauces called "SLICK'S BIG TIME BBQ SAUCE" in Sweet & Tangy and Sweet & Spicy varieties! They are made in the Carolina style and we would absolutely LOVE to submit our sauces to you for SAUCE OF THE WEEK! How can we go about doing that? Thank you!
kind regards,
Barbi & Dan SLICK
myslicksauce.com

barbecue sauce recipe is very spicy. Thanks for sharing!