Assault with a Deadly Meat Thermometer 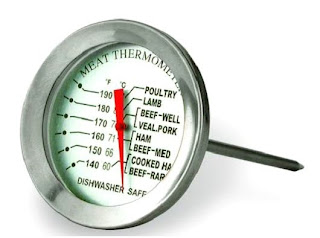 Man stabbed with meat thermometer at movie in CA

LANCASTER, Calif. — Authorities say a man was stabbed in the neck with a meat thermometer after asking a woman to silence her cell phone during a screening of the film "Shutter Island" at a Southern California movie theater.

Los Angeles County sheriff's spokesman Steve Whitmore says the stabbing happened Feb. 27 during a screening of the Martin Scorsese film in Lancaster. He says the two suspects remain at large.

Whitmore says the victim had complained about a woman sitting nearby who was talking on her phone during the movie. He says the woman left with two men, but the men returned minutes later and stabbed the victim in the neck.

Two other people in the theater came to the victim's aid and also were hurt. The man was hospitalized with serious injuries.

The sheriff's office says it knew the weapon used was a meat thermometer because the suspects left it behind. No further details were released.

So who carries around a meat thermometer to a picture show?
Posted by the mrs. at 9:00 PM

they would have gotten a much more accurate and faster reading if they were using a thermapen.

I guess that tops the phrase, "Stick a fork in me, I'm done!"

wow. just wow. And if they went to the grocer to buy a weapon when they stepped out, don't you think a knife would do.
Next time they strike I'm betting it will be with corn on the cob picks.