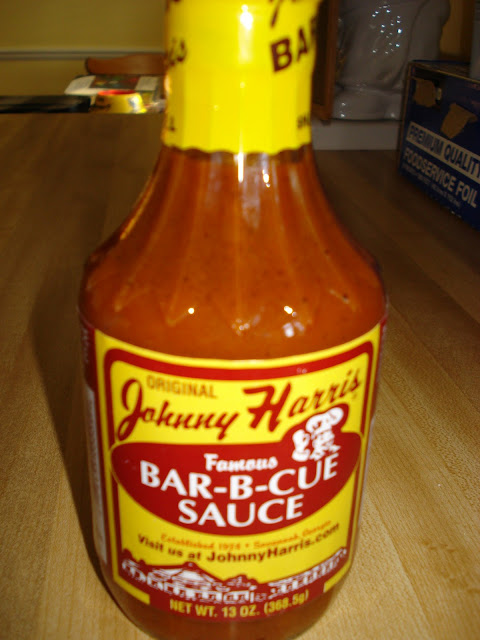 Johnny Harris Restaurant opened in Savannah, Georgia in 1924. That's a LONG time ago, especially in barbecue years. In fact, it's Savannah's oldest restaurant.
The signature barbecue sauce recipe was allegedly created by a black cook (their words) named John Moore in the early days of the restaurant. Johnny Harris eventually wrote the recipe down and passed it on to his business partner Red Donaldson. The sauce harkens back to a time before barbecue sauce was candy sweet.
This is a tomato-based sauce, but mustard is clearly the star of the show. In fact, it tastes more like a South Carolina mustard-based sauce than anything else. There is not very much sweetness to be found. The sauce is roughly the same color and consistency as Heinz 57 Sauce. The bottle has a message on the side in large print - "HEAT SAUCE TO DOUBLE FLAVOR".
Grade: B
Posted by BP at 5:43 PM

I've tried hundreds of BBQ sauces and this one, used correctly (put on meat last 5 min of cooking),is the very best yet.

I found the way of late-night dinner through the Elecare Coupons catch low rates dieting meal with the company partner and family members.

I had tried your BBQ sauce when we had a party at our work place SEO agency Karachi I must say your sauce has a different any unique taste especially the spice which is completely perfect in short I must say that your sauce is highly recommended and perfect to enjoy with all types of BBQ.

I had attempted your BBQ sauce when we hosted a get-together at our working environment WordPress Development Company and I should say your sauce has an alternate any interesting taste particularly the zest which is totally amazing in short I should say that your sauce is energetically prescribed and wonderful to appreciate with a wide range of BBQ.

I tested your BBQ sauce during a get-together at our Office Sanitizing Services, and I must state that your sauce has an alternate unique flavour, particularly the zest, which is really great. In conclusion, I must add that your sauce is highly recommended and delicious with a range of BBQ.