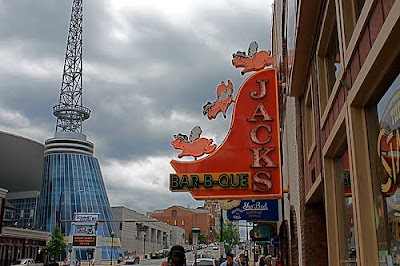 Nashville has been on kind of a roll of getting named to various and sundry lists and top tens. 50 Best Places to Live. Top 10 Cities for College Grads. Top 10 Cities for Single Women. Top 10 Pickup Cities. Top 10 Shopaholic Cities. And my personal favorite, Top 10 Unhappiest Cities.

And Music City has some pretty lofty company on the list - Memphis, Central Texas, Kansas City, North Carolina - all places that are considered the barbecue capitols of the world.

A couple of years ago, when we did our rundown of Nashville's barbecue joints, we set out to answer the question of whether Nashville is a great barbecue town. What's funny is that we never really explicitly answered the question. Maybe you can infer your own answer based on my reviews. By volume, I think Nashville is a major league barbecue town - there are a LOT of barbecue restaurants in this city. And like the U.S. News blurb says, there is a lot of variety. But as for quality (and more importantly - consistent quality)? I think we're a long way from the Memphises and the Kansas Citys of the world.

Nashville's current food scene is dyanamic, and I think we're in an exciting time. Things are changing and there are people who are committed to greatness and to doing things the right way. The future is bright and only getting brighter, and I think barbecue can be a part of that. But at the same time, barbecue, more than many other cuisines, is very rooted in tradition. And I'm not sure that Nashville has the foundational bedrock of tradition that many of the other great barbecue cities have on which to build.

Speaking of new places, we'll soon have reviews of some of the new barbecue restaurants that have sprung up in Music City. So stay tuned...
Posted by BP at 9:45 AM

I just can't agree that Nashville is a great BBQ town. I would classify our BBQ as passable with a couple really good places. Sure there are good joints, just like in any southern city, but all the BBQ is transplanted. Without it being part of the culture it just can't grow to be elite. I think that hurts the identity.

You can count the great BBQ places in Music City on one hand and have fingers left over. We have a great food scene as a whole, but the influx of metropolitan style has focused the scene on the event dinner.

US news got this one wrong. Hog heaven, really? Martin's and the smoke et al truck is our best and then a long list of blah. and to talk about Memphis without mentioning rendezvous is sacrelig. How do you talk about Austin without the salt lick? I doubt us news even visited their nominees.

I quit paying attention to "X most Y cities" list when in the past year Knoxville was named #1 cleanest city and #1 most romantic city.

Both are total BS and when I looked into their parameters, it was based on avg amount of cleaning supply purchases per capita for cleanest city and romance novels/adult toys/etc for the "most romantic".

I have to go now. Gotta clean and get lucky. ;)