BBQ SAUCE OF THE WEEK: Jay's Hole in the Wall 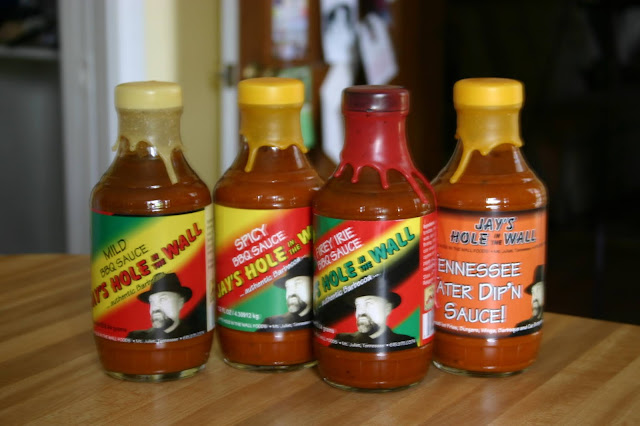 Jay Wilfong is a man of many talents. Based in Mt. Juliet, Tennessee, he's been making music in Middle Tennessee for many years under the name Dr. Fong (listen here). He's been a barbecue restaurateur several times in the last four decades. And now he's got a line of barbecue sauces called Jay's Hole in the Wall.

Jay's products are featured in Kroger stores, and you can see that these bottles will surely stand out among the other barbecue sauces in the condiment aisle. If the colorful motif makes you think of reggae and rasta, that's just fine with Jay - his culinary style is heavily influenced by the flavors and spices of Jamaica and the Caribbean. The wax coating on the top adds more tropical flair (although I found them somewhat hard to remove).

Jay's Hole in the Wall has four primary flavors - Mild, Spicy, Firey Irie and Tennessee Tater Dip'n Sauce. The Mild is a recipe that Jay developed over 40 years ago when he opened his first restaurant. It's a relatively thick, lighter colored sauce. It is tangy and sweet, with a lot of mustard flavor. The Spicy version is essentially the same sauce, but with more heat on the finish. The heat of the Spicy version brings more balance to the sweet and tangy flavors. The Tennessee Tater Dip'n Sauce has the same color and consistency, and lies somewhere between Mild and Spicy on the heat scale. It also seems a bit more on the sweet side, with less tang, less mustard flavor and more exotic spices. The Firey Irie sauce turns the exotic spices and the heat up even higher. This sauce is legitimately hot, with an interesting complement of earthy and exotic flavors swirling above a base that is still fairly sweet.

Overall, this is a fun and tasty line of products with a lot of personality - a great reflection on the man who makes them.

I have read lots of information before and I find this the most informative of them. Thank you for sharing!