The town of Winchester, Tennessee, is a place that is certainly steeped in Ulika lore. In addition to being the hometown of both Phillip Fulmer AND Dinah Shore, Winchester is home to one of our favorite barbecue contests - High on the Hog. I went to HOTH in 2004 before I even really knew what a barbecue contest was. And of course there was HOTH 2006 - our very first contest - such a flood of emotions...and of rainwater. And then there was the triumph and vindication of HOTH 2007. Such good times...but I digress.

For as long as I've been spending time in Winchester, there has been but one barbecue restaurant - Larry's. Larry's might actually be in Decherd, Tennessee, I'm not sure, because it's hard to tell where Decherd ends and Winchester begins. Larry's is, for the most part, a takeout establishment. There are some High on the Hog trophies on display in the window, and the barbecue is pretty good. Oh, and they serve pool room slaw, though I think it works better on a cheeseburger like they make them in Fayetteville than on a barbecue sandwich. But again I digress. On to the point. 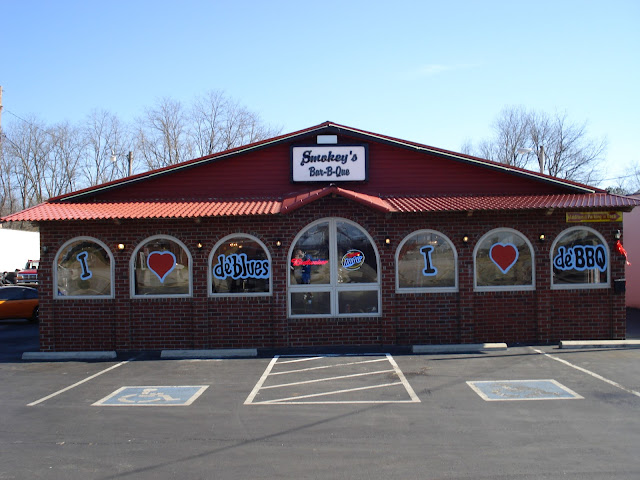 It seems a challenger has appeared in Winchester. Smokey's Bar-B-Que has recently opened in what was formerly a Mexican restaurant, just down Dinah Shore Boulevard from Larry's. Smokey's is a full-service, sit down restaurant with full bar service and a definite blues theme - loud blues music on the stereo, photos of blues musicians on the walls, etc. And though I'm not normally a fan of blues as a musical genre, in a barbecue joint, it's as natural as the smell of hickory smoke. So I approve. 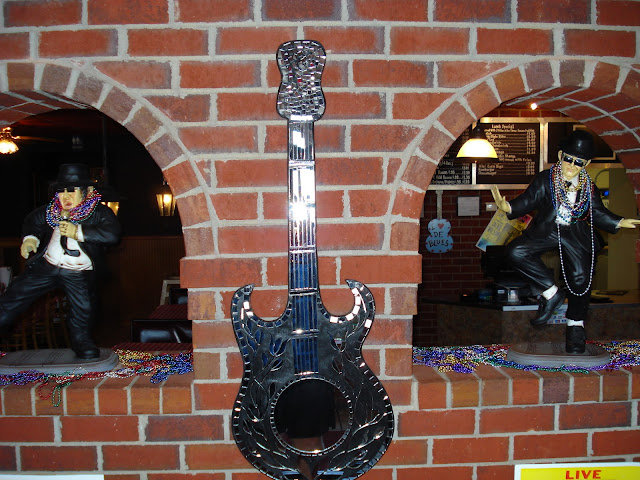 Upon being seated, we were served a basket of white bread slices with a bowl of barbecue sauce. I have been to a lot of barbecue restaurants, dear reader, but I have never seen this. It's not a bad idea, I suppose, especially if the barbecue sauce is good. In this case, it was merely average - ketchup based and very sweet, but lacking anything interesting in the way of spices. 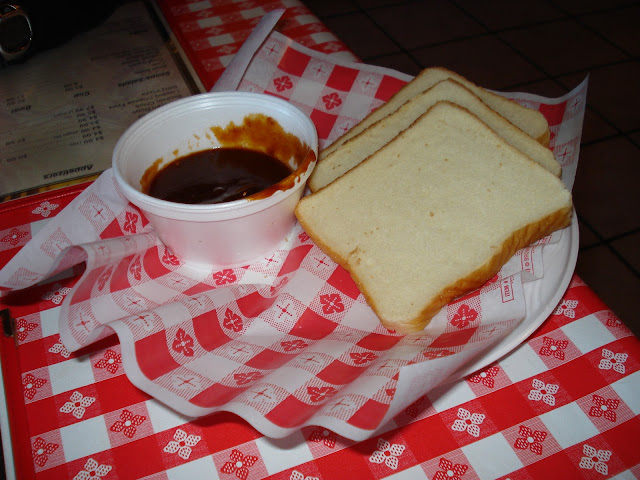 When it was time to order, I asked our waitress what the best thing on the menu was, and she emphatically endorsed the ribs. So ribs it was. There was no pool house slaw to order as a side, but there was...corn pudding. Score! I went with the C.P. and some baked beans. 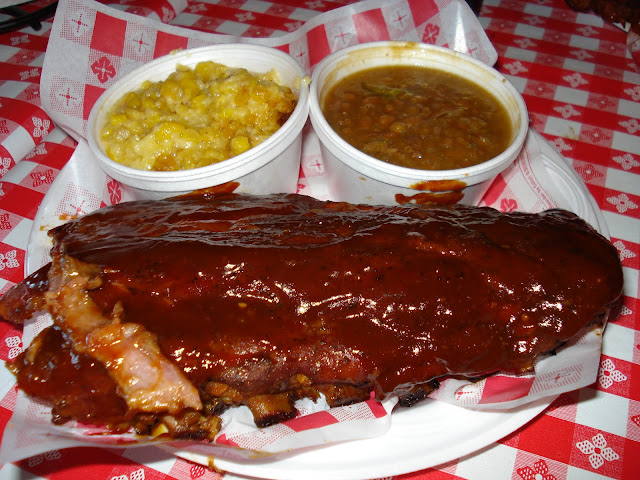 The ribs themselves were very tender - falling off the bone, in fact. Is that a good thing? I guess that depends on whether you're a KCBS judge or the general public. I grew up thinking of "fall-off-the-bone" as a positive descriptor, but in competitions, it's a no-no. I guess that's a debate for another day. Suffice it to say that these ribs were very tender. The ribs were also generously slathered with the same barbecue sauce that came in our bread basket. It's hard for a rack of ribs to rise above the sauce they're wearing, and in this case, the overall result was a very average rack of ribs.

As mediocre as the ribs were, though, the sides were just as amazing. The baked beans had just the right amount of brown sugar and molasses sweetness, with bits of sausage and jalapeno peppers mixed in to add a hearty kick. The corn pudding was cooked perfectly - viscous but not rigid - and was buttery rich and slightly sweet.

As our waitress collected our plates, she said, "I'll be back with your banana pudding."

"We didn't order any banana pudding," I replied.

"It comes with your meal." 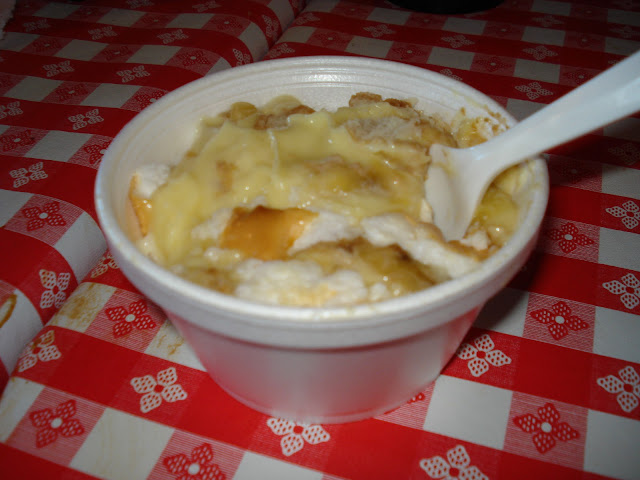 Wow. Another first - free dessert. I can't complain about that.

I am convinced that, theoretically, Smokey's and Larry's can coexist. The greater Winchester-Decherd area is sizeable, and is growing all the time, and I think it can support two barbecue restaurants. And really, the two restaurants are quite different in execution. One is more of a grab-something-quick takeout place, and one is a place where you might want to go and stay awhile. Best of luck to both.

Always hittin ya with that pre-applied sauce!

Okay, can I order just the two puddin's please? Seriously, I'd drop in for that!

'viscous but not rigid' I'm impressed...look out Alton.