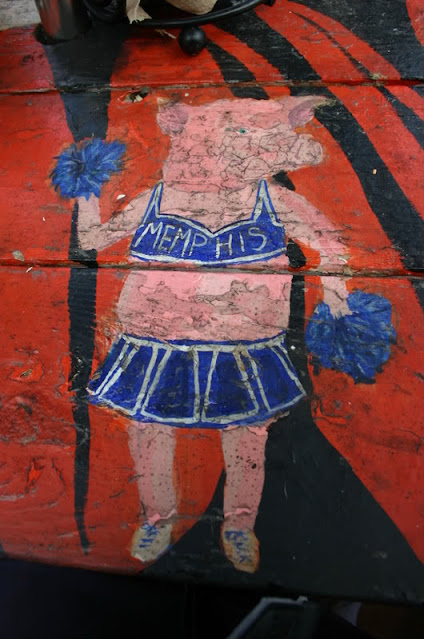 Perhaps no food item is more closely associated with the state of Tennessee than barbecue. It's an integral part of our culinary identity, so it's no wonder that the debate runs passionate when the subject is barbecue. It's remarkable, then, that when it comes to the question of where the best Tennessee barbecue resides, there is little debate. West Tennessee in general, and Memphis in particular, are so rich with great barbecue joints, it's downright uncanny. I've had the opportunity to spend some time in Memphis recently, so I decided to take a look at some of the best and some of the best known. Some of these places I've visited before, and some were new to me. Some are world famous, and some are meager neighborhood establishments. In Memphis, great barbecue can come in all shapes and sizes. 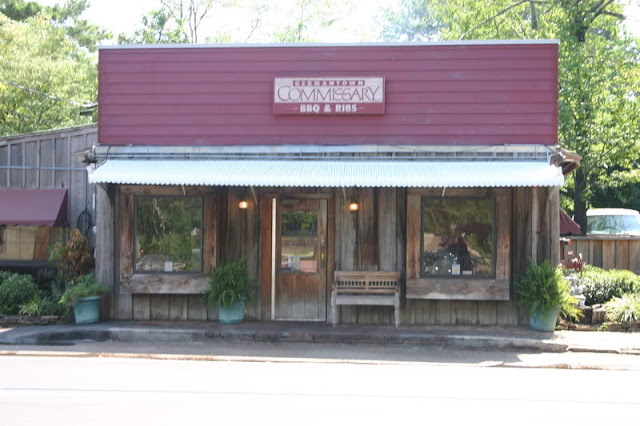 The Germantown Commissary has been a favorite of mine for years. The Commissary is not actually in Memphis, but in suburban Germantown. It has a classic barbecue joint feel, with creaky wooden floors, old wooden tables and chairs, and lots of random, funky memorabilia on the walls. And it smells like hickory smoke. I've usually found both the pulled pork and the ribs to be good, so I ordered a combo platter. 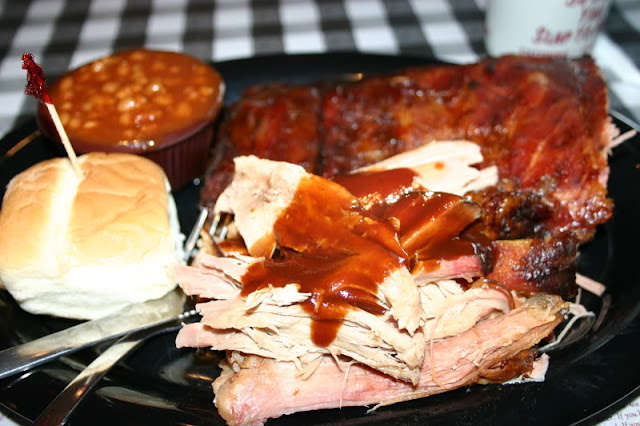 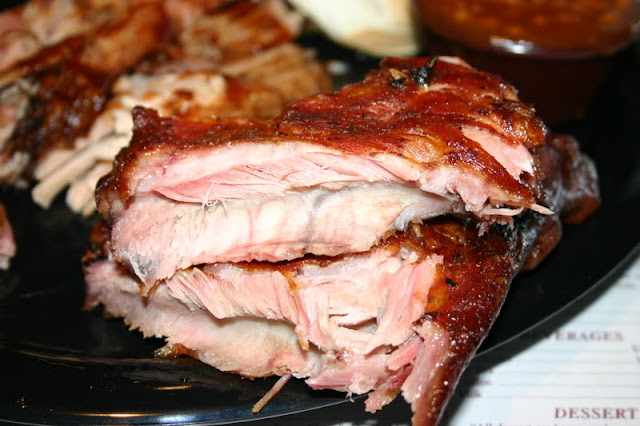 On this day, the ribs were tasting very average. They were a bit undercooked, requiring some work to get the meat off the bone. The seasoning was minimal. Perhaps if they had been cooked to a greater tenderness, more of the pork flavor would have shone through. Maybe it was just a bad day for the Commissary, but I found the pork to be disappointing, too. As usual, it was pulled in large chunks, but there was not that moist tenderness that great pork shoulder should have, and there was a lack of any real flavor in the meat - good thing there was sauce on the table! 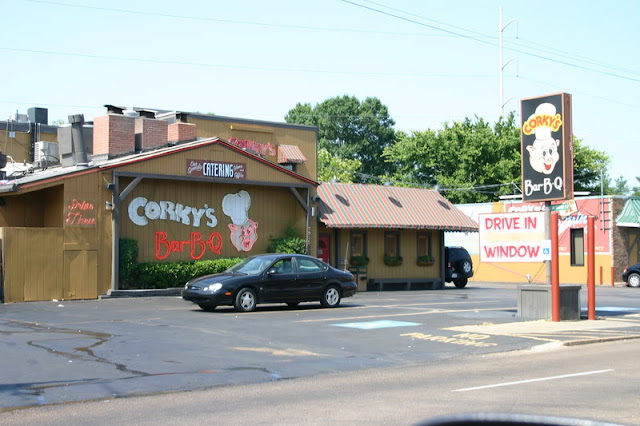 Corky's, it could be said, is to Memphis what Whitt's is to Nashville. They win "best barbecue" year after year in local readers polls, yet their reputation with barbecue aficionados remains dubious. My only exposure, until now, has been at Corky's Brentwood branch, which has never impressed me. But people from Memphis will say, "You've gotta go to the original one on Poplar." So I made my way to midtown to give this landmark a shot. Corky's does a brisk business, even at lunch. After a ten minute wait, I was seated, and I ordered a "Killer Combo" of ribs and pulled pork. 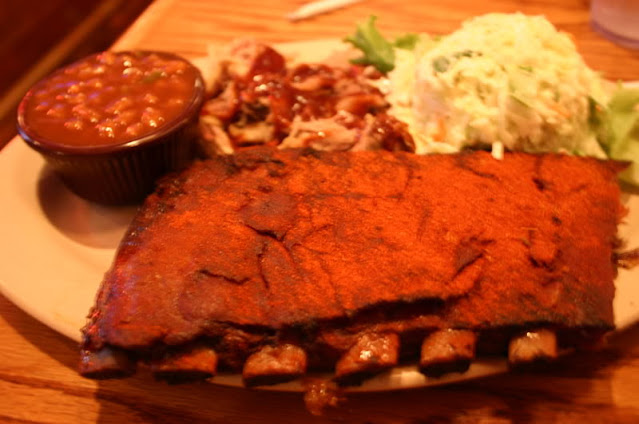 When the plate arrived, the prospects did not look good for the ribs. And unfortunately, they did not taste much better than they looked - dry, not much meat on the bone, and the dry rub (which I am not necessarily prejudiced against) was not doing it for me. The pulled pork was definitely better. Though it didn't have much smoke flavor, it was cooked to a perfect tenderness - juicy without being mushy. Overall, though, my experience at this original Corky's location was only marginally better than my Brentwood experiences. 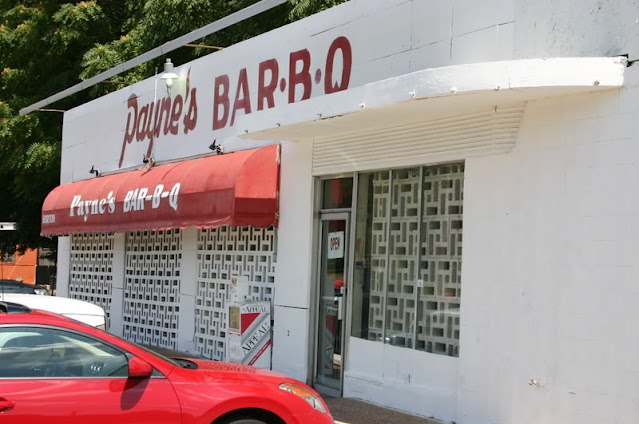 You may remember that my last trip to Memphis included my baptism at Payne's Bar-B-Q. I still find myself dreaming about that barbecue sandwich from time to time. So after a decidedly mediocre start to my Memphis adventure, I decided to pull out the big guns and head for Lamar Avenue. But surely I was setting myself up for disappointment, right? The sandwich could not be as incredible as I remembered it, right? Wrong. It really is that good. 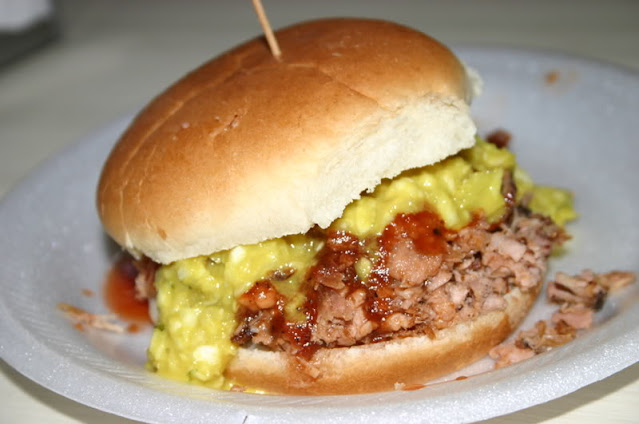 I'm trying to put my finger on exactly what makes this sandwich so great. There is obviously a divine harmony between the sweet hot barbecue sauce and the tangy fluorescent slaw. But ultimately, I think it's the chopped pork that truly makes it. It's a mix of velvety tender pork spiked with lots of crispy bark pieces - it's textural perfection, Dear Reader. And this time, I discovered a new thing to love at Payne's - homemade fried pies. They are quite simply the best fried pies I've ever had - a light and flaky crust, not too greasy and not at all soggy, with the perfect amount of apple or peach filling. I can't imagine a better culinary one-two punch than a Payne's chopped pork sandwich followed by a Payne's fried apple pie. Mmmmmm!
Posted by BP at 8:58 AM

What's in that slaw from Payne's? It's neon!

Next time in town, skip the ones you went to (well, not Paynes) and try:

I was born and raised in KC, but have lived in Memphis for 14 years...I know my Q!