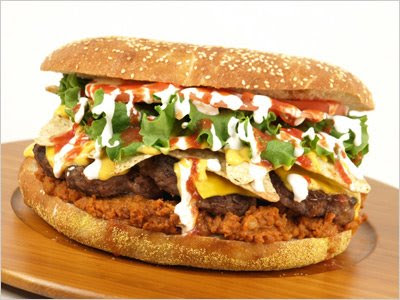 Spring is in the air. Today was sunny and 72 degrees. That also means that baseball is just around the corner. Spring Training is already underway, and stadiums across the land are preparing for opening day. Here in Nashville, our very own Nashville Sounds' Greer Stadium has been overhauled in the off-season to the tune of $2.5 million. Upgrades include a new paint job, new consession areas, and an actual LED screen. They are even teaming up with local brewery Yazoo to supply the beer for everyone's favorite night, Thirsty Thursday. While the new Greer Stadium is set to open on April 9th, the guy from Man Food is eagerly waiting for opening day at Fifth Third Ballpark. Home of the West Michigan Whitecaps, the 5/3 Ballpark is also the new home of the all new 5/3 or 1.66667 lb. burger that includes salsa, sour cream, and a chili Frito pie served on an eight inch sesame seed bun.

Now in the past, we have seen wild balk park creations and even some BBQ Addicts that explode for bacon, but this creation is equally over the top. Here are the stats:


It is recommended for 1-4 people, but if an individual finishes it in one sitting he/she wins a nice 5/3 t-shirt. However, you could just skip the burger and sign up for a Fifth Third credit card to get the free shirt. It's really up to you.

Sarah,
it would be a good post marathon meal.

If ever there was a reason to go to Michigan...