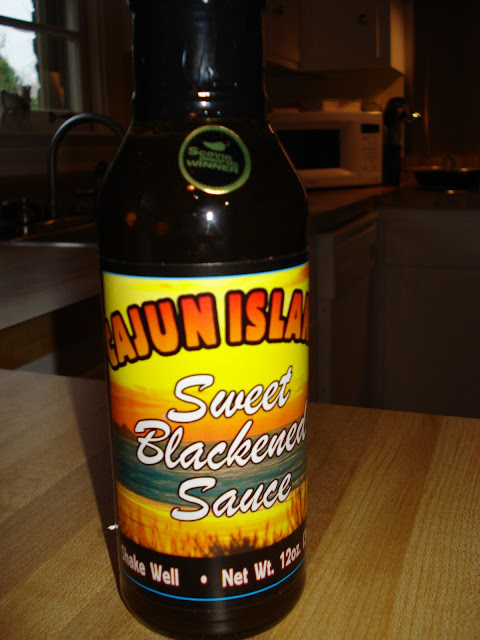 It's time for another culinary buzzword - "blackened!" I'm not sure what blackened really even means. Wikipedia says Paul Prudhomme invented it.

"It consists of pieces of fish dipped in melted butter and then dredged in a mixture of herbs and spices, usually some combination of thyme, oregano, chili pepper, peppercorns and salt. The fish is then cooked in an extremely hot cast iron skillet."

Call me crazy, but if that's an accurate depiction of the technique, it sounds like something that was developed well before the 1980s. I mean, haven't we come to the conclusion at this point that the Chinese invented everything food-related?
Which is interesting, because this week's sauce - Cajun Island Sweet Blackened Sauce - tastes more Asian to me than anything else. It does look kind of Cajun - like funky Louisiana swamp water, I suppose. But it tastes like a slightly thicker, really pepped up soy sauce - sweeter and more spicy, but with the same essence - kind of like a distant cousin of Hoisin. And it's downright delicious. It's a very strong taste, more likely to take over, flavor-wise, than to complement. But on the other hand, you could put it on shoe leather and it would taste great.
Grade: A
WIN a FREE BOTTLE of the BBQ SAUCE OF THE WEEK! We have a bottle of Cajun Island Jazzy Jerk Sauce to giveaway to one of our readers. All you have to do is visit the website and post a comment here. One winner will be randomly selected on the following Tuesday night and sent a free bottle of sauce. Just leave an email address so that we can contact the winner.
Posted by BP at 5:25 PM

can't be this Easy... always looking for new sauces

Sounds like a great combination! Judging a BBQ contest w/ hubby next month. Trying to get a head start on what the "GREAT" stuff tastes like. Lets go!

No idea how blackened would work out in a BBQ sauce, but would love to try it!

By far my favorite way to cook fish, especially Tilapia.

would love to try this sauce out...
nice site btw.

I really like sweet sauce, especially if it is free!!! I hope I win.

Great readings! Glad to have found a local BBQ blog.

This stuff sounds wonderful. Thanks for the chance to win!
ruthann (dot) francis (at) gmail (dot) com