For whatever reason, certain areas of our city seem to be more endowed with barbecue restaurants than others. For instance, in North Nashville on Clarksville Pike, there are no less than five barbecue restaurants within a mile of each other, while Bellevue's lone barbecue outpost (the excellent Pig & Pie) is only open Thursday thru Saturday. Clarksville has more than a dozen barbecue restaurants; Murfreesboro has but a handful. Sumner County, which lies to the northeast of Nashville, has traditionally fallen into the category of underserved. But with two rapidly growing cities like Hendersonville and Gallatin, it's only a matter of time until the pork purveyors start popping up.
One such relatively recent entrant is Buffalo P's BBQ, Chicken, Catfish & Everything in Gallatin. One heck of a name, huh? They're really leaving their options open with the "everything," but after a quick scan of the menu and a look around the premises, I'd say it's safe to simply label Buffalo P's a barbecue restaurant. Well...maybe a barbecue trailer. 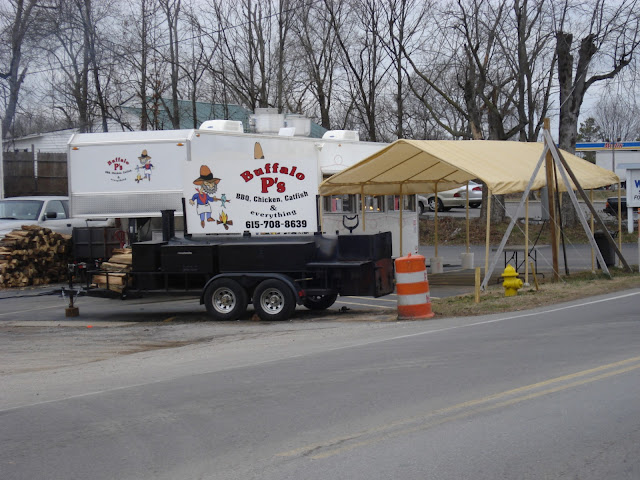 The Buffalo P's operation is set up in a vacant parking lot on Red River Road, just over the railroad tracks from Main Street, across from the Co-Op. They have a trailor for preparing and serving the food, a small awning covering a limited amount of seating, and two smokers. I always love it when I see real, actual smokers at barbecue restaurants. It's instant barbecue street cred. It tells me that these guys didn't learn to cook barbecue in a some dang kitchen. 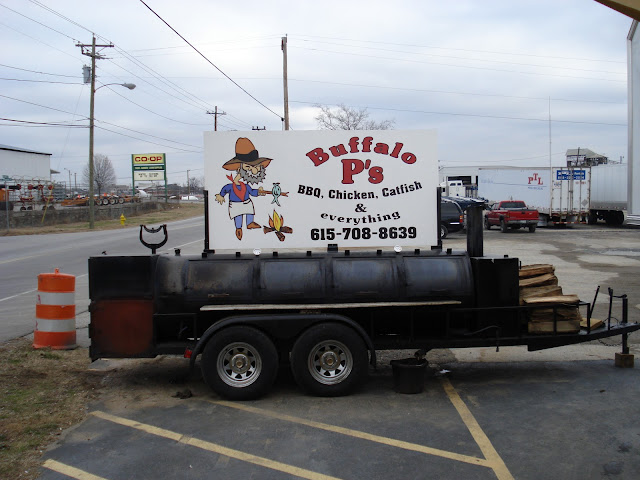 It appeared most of the work was being done on the smoker behind the trailer. 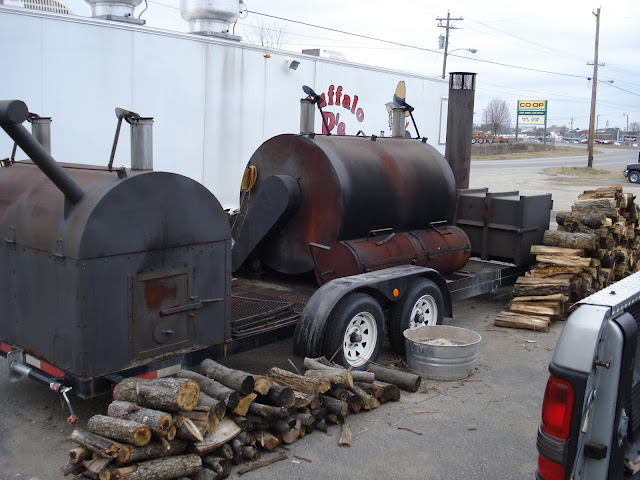 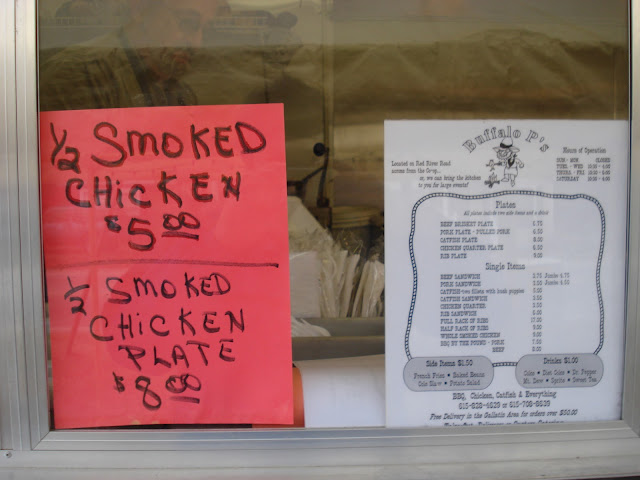 I went with the pulled pork plate. Pulled pork is my go-to, unless I've been specifically advised to try something else. Why? First of all, I like it the best. Second, this is Tennessee - if you can't get your pork right, you're not going to last very long. It's the litmus test. 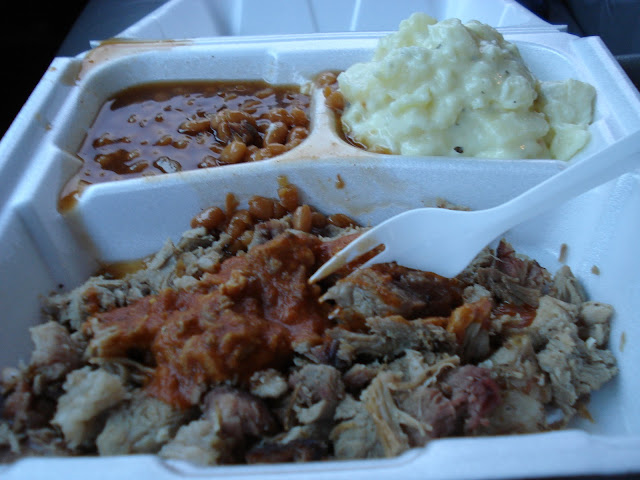 On the side, I went with that classic hot and cold duo - baked beans and potato salad. As you can see, the pork came pre-sauced. I'm not a fan of pre-sauced. I prefer to enjoy the pork au naturel and then if/when it needs sauce, I'll be in charge of the application. In this case, sauce was indeed needed. Although the meat had a very distinct smoky flavor, I found it to be rather dry. Perhaps it wasn't as fresh as usual, or perhaps it was just an off day, but overall I would rate the pork as average. The sides were solid, if not spectacular. All in all, I was underwhelmed. For those of you who have been to Buffalo P's, let me know what you think.
Until next time...
Posted by BP at 9:34 PM

Never been there, but I have passed it many times. You weren't far from my house.

There are a few "Q" places up here, but they all suck. Nobody has good "Q" up here, they just don't get it.

they've served out at Volstate a few times...I love it.

They used to be my favorite. Just got a turkey plate. Not edible. All fat. Obviously what was left over. Shame on them. Never going back. Not worth the long wait in the heat.

The food truck with the BBQ of the meat has been the relish to taste for the lunch on the road by the crossing city. Those foods on the road have the total setup of the food and the research paper writers not to prefer the food on the restaurants.

Nashville is such a beautiful city I visit I like the food most in this city all the cooks have delicious taste on their hands. I visit this city due to my academized reviews assign me to my college on the food of this beautiful city.

Yay! The famous barbeque in Nashville. I tasted it once and now because of this post, I'm literally craving!