Clearly, the most popular girl in school this year is BACON.
Bacon, bacon, bacon.

From the Thanksgiving TurBACONducken to the recent BBQ Addicts internet phenomenon, everyone is simply mad over bacon. TurBACONducken, from the baconrific folks at BaconToday.com
(bringing you daily updates on the world of sweet, sweet bacon)

BBQ Addicts' Bacon Explosion, taking over an internet near you


I like to think that we here at the Ulika Food Blog are the ones who started this whole frenzy. You see, we've been eating bacon for years. It was, after all, BP who introduced the chocolate Bacon bar and placed a few slices of those tasty pork strips on his PB&J MONTHS ago. We told you about the bacon Halloween costume, the bacon briefcase, the gummy bacon strips and the bacon band-aids. And we were the ones who celebrated the victory of BACON over fries. 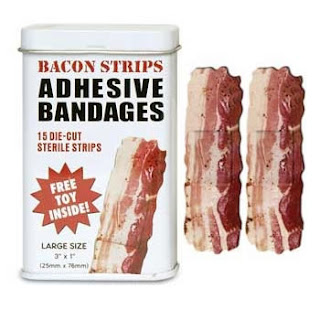 
But oh bacon, your reign continues... the BaconToday folks have spotted a new one - Bacon Lollipops

Then this evening, I came across another new offering in bacon. Why settle for bacon bits in a chocolate bar when you can go ahead and just cover the whole strip of bacon in chocolate:

And over on the BBQ Forum, "Mike" has made himself a Bacon beer coozie:

To keep the beer hot? To provide traction?

And now, keeping with those healthy New Year's resolutions, one man has vowed to eat nothing but bacon for the entire month of February.

"...for the entire month of February, 2009, I, Michael J. Nelson will eat nothing but bacon. Nothing, my friends, but bacon. Why? Because bacon is nature’s finest and most nourishing food." - Mike Nelson, Bacon Stupidity 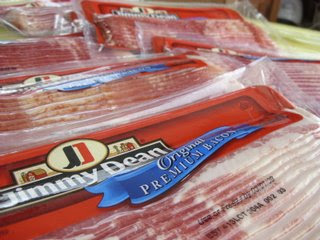 
We know it's tasty, but who would have known that the cured belly of a swine carcass could be so trendy too. Stay classy, bacon. We love ya.
Posted by the mrs. at 10:55 PM

So what are the odds that the Bacon Stupidity guy survives this experiment - 3:1? 4:1?

Love the picture of bacon wrapped around beer.