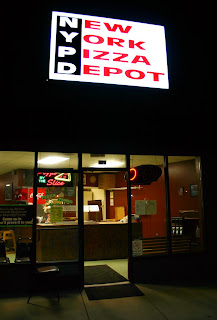 Even on the road, we keep pizza in mind. Last Friday evening in Clarksville, we decided to look for a local spot to continue our Friday Night Slice search for the finest pizza. Driving down the main drag of Fort Campbell Boulevard, we noticed several signs for interesting local pizza restaurants, but found many to be displayed in tandem with smaller "Space Available For Lease" signs. One sign for a local spot had an even worse banner alongside it: "Coming Soon: Little Caeser's Pizza!"

But a promising spot tucked away in a strip mall caught our eye: NYPD Pizza. BP and I picked up an extra-large pepperoni and extra cheese pizza (traditional, hand-tossed crust) and headed back to the barbecue competition site on the square. 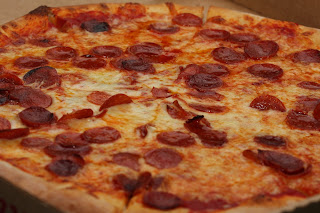 While they offer the thicker crust Sicilian-style square pies along with calzones and stromboli sandwiches, quite obviously, NYPD primarily sells New York-style pies. They use hand-tossed dough and fire made-to-order pizzas in their authentic brick oven. In an interview last summer, owner Joe Nazar noted with pride the freshness of his ingredients and the lack of a big freezer in their restaurant for storing trucked-in frozen doughs or meats. All of his ingredients are sliced or chopped and made fresh daily.

The service was friendly and the pizza was piping hot as it was boxed and sliced for us to take away. We headed back to the Ulika living room.

NYPD makes a great slice of pizza. The cheese was hot, gooey and all over the place. Its sheer quantity helped it hang on to itself preventing much of a pull-away, but it was a fresh, tasty and creamy mozzarella blend. The pepperoni slices were smaller cut circles and NYPD certainly wasn't skimping as they were tossed all over the cheese sometimes three and four slices deep - it's a good indicator of fresh cut pepperoni when the slices stick to themselves. Indeed the pepperoni was fresh and spicy, nothing too hot or alarming, just good and juicy with enough flavor to make you stop and notice. The crust was middle-of-the-road, probably the least exciting element of the pizza. It was a good, hand-tossed crust without the excesses of flour and cornmeal that kill other pies, but without anything memorable either. The thin base and soft texture around the edges were perfect, and just a little more going on here would have sent the whole pizza into Hall of Fame territory. Overall, I was impressed and will look forward to a return visit next time I'm in Clarksville.

"We don't deliver. Our pizza is good enough to pick up."
I agree.


Got any suggestions for places that I should cover? Let me know!
Posted by the mrs. at 8:36 AM

Well said, Mrs. Thank you for letting me be part of Friday Night Slice.

I thought I remembered another pizza place called "NYPD"...sure enough: NYPD Pizzeria. It's a chain. They have a location in Mt. Juliet.