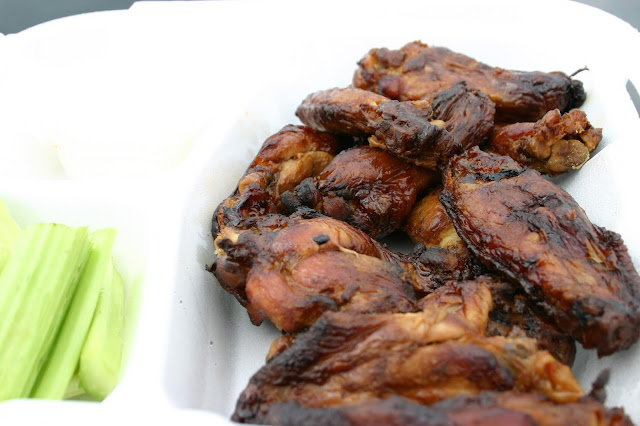 Murfreesboro seems to have expanded every time I visit. There appears to be no limit to the growth of the Bucket City, along with the rest of Rutherford County. Did you know that Murfreesboro is now considerably larger than Jackson? Anyway, in a city of almost 100,000 people, there is surely no shortage of barbecue restaurants. Most of them we have already covered, either as chains, local chains, or Memphis imports. But there are a couple of Murfreesboro originals that are worth looking into. 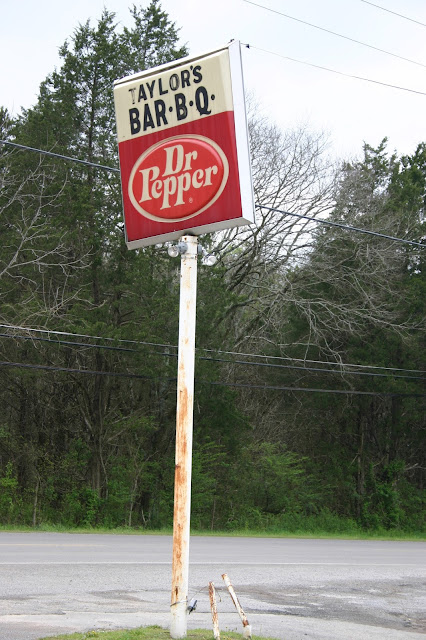 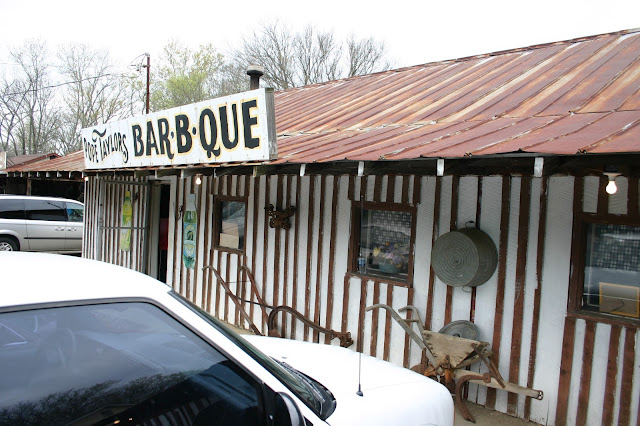 Pope Taylor's Bar-B-Que is just outside the city limits on Woodbury Highway. It's in an old tin-roofed building next to a similar building that houses Pope Taylor's Market. I'm not sure if Pope Taylor's Market is still open. Anyway, the people that run the barbecue place are just as friendly as can be. It's a limited menu - pretty much just barbecue sandwiches, hamburgers, and a few side items. 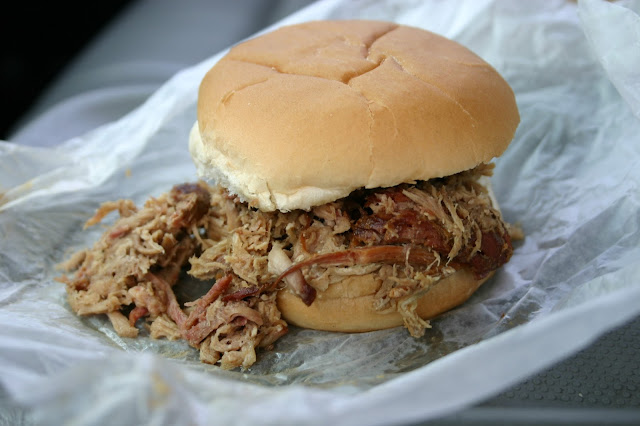 The barbecue sandwich is of course pulled pork. The generously portioned pork comes having been pre-sauced with a very vinegar-based concoction. As a result, the pork is very moist, but does not have much flavor beyond the vinegar and a little bit of smoke. Overall, a very average pulled pork sandwich. 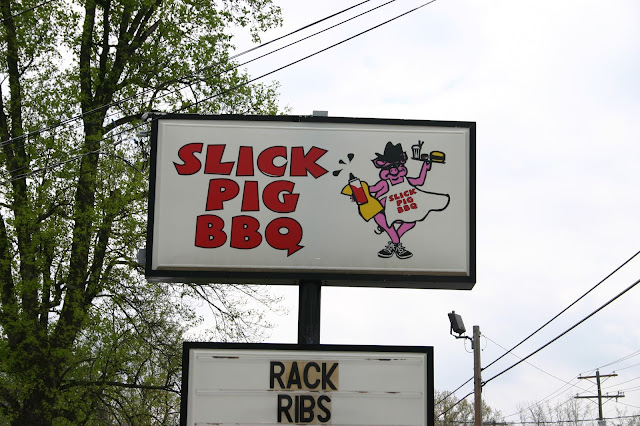 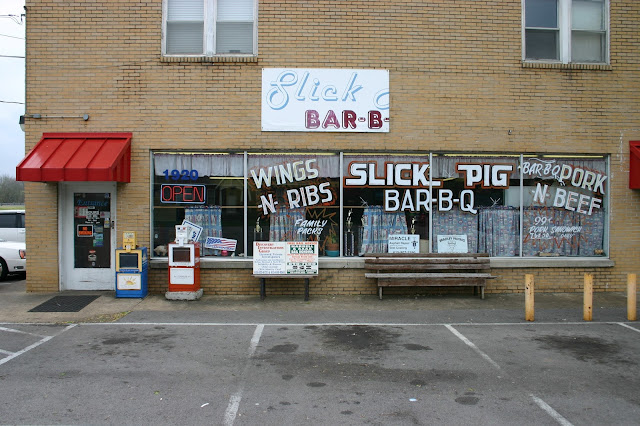 Slick Pig Bar-B-Q is closer into town on East Main Street. They've been a Murfreesboro fixture since the Spongebath days, which, in Murfreesboro years, is like, a long time. No discussion of the Slick Pig is complete without mention of their smoked chicken wings (see photo at top), which have justifiably earned the place great acclaim. There is no sauce involved, and they are not spicy. They're just perfectly seasoned, slow-smoked chicken wings that are so tender that the meat pulls right off when you take a bite. The wings are so addictively good that in all the years I've been going there, I can't remember ordering anything else. Let's see how their standard barbecue fare stands up. 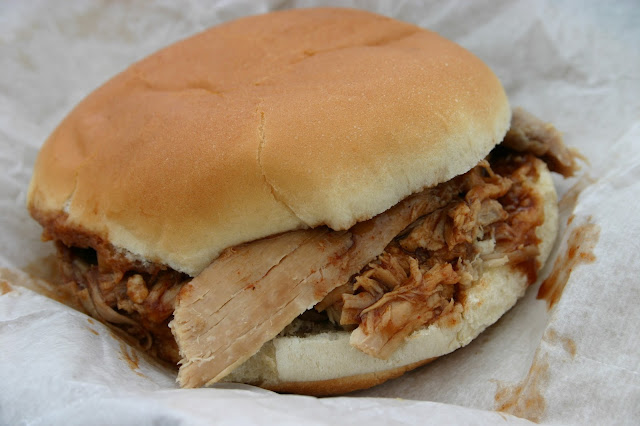 The pork sandwich came on a griddled bun, which is always a good thing. The pork was relatively tender, and with good flavor that was complemented by the Slick Pig's very good hot barbecue sauce. This was a very tasty sandwich. 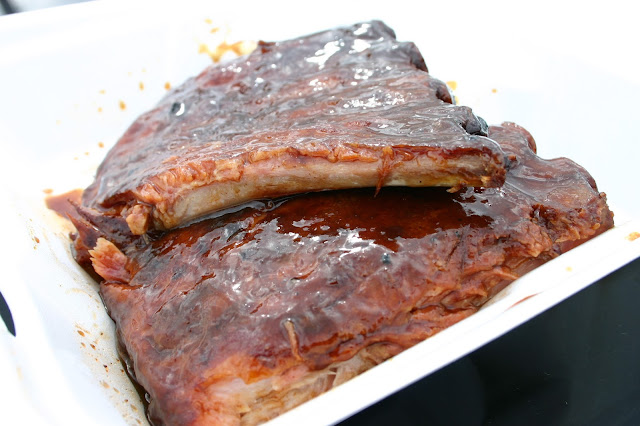 The ribs were a winner as well. They were untrimmed spares which were cooked perhaps a bit too long. But hey, I would rather the meat be falling off the bone than be undercooked and tough. The meat had outstanding, rich flavor, and the sauce once again shined, providing sweetness and a little bit of heat.

So it appears that the Slick Pig does excel beyond just their chicken wings. Based on my experiences, this has to be considered one of the best barbecue restaurants in Middle Tennessee.

I’m impressed with the special and informative contents that you just offer in such short timing.great post to read

Great! We will be connecting to this enormous post on our site. Continue the good writing. NicerSmile.com

Your way to enlighten everything on this blog is actually pleasant, everyone manage to efficiently be familiar with it, Thanks a great deal.GeneralLiabilityInsure.com Reviews

I was getting bore since morning but as soon as I got this link & reached at this blog, I turned into fresh and also joyful too.Scott Lanzon

Thanks for your sharing. Always love food post. Get Likee app for magical short video making and sharing. Join the big community, get to know more about the world and make new friends.

I sent your articles links to all my contacts and they all adore it including me. Slotxo