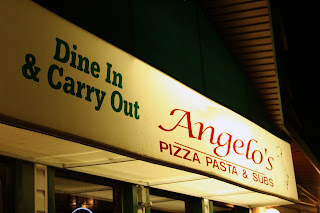 The story of Angelo's begins with two brothers - Sal and Angelo - living in Brooklyn, New York. In the early 1990s, Sal took a nice long road trip from New York to Florida, sneaking west a little to drive through Tennessee. While heading up I-24, his car broke down around the Hickory Hollow mall exit just outside of Nashville.

Circa 1993, there are many things that one might notice should they stumble upon L.A. (you know it, lower Antioch). Spenser's Gifts sure does think Beavis and Butthead is funny. That would be true. There are more car dealerships here than people. It seems that way. Yes! They have Crystal Pepsi in the food court. That's the subject of another post, another day. Nice bangs, Misty. You too, Shane.

But when Sal stopped in, his first thought was pizza...or lack thereof. He immediately called his brother, Angelo, and decided that they needed to set up shop and bring Brooklyn-style pizza to Antioch.

Sixteen years later, Nick LaMattina (Sal's nephew and Angelo's son) and his wife, Marcella, moved down from Brooklyn to take over the transplanted family business that now operates out of two locations - Antioch and Murfreesboro. The family tradition is maintained with slow-cooked tomato sauce, hand-tossed dough and fresh toppings sliced daily. The restaurants offer pastas, calzones, subs and salads as well, but the pizza is what we're here for and certainly what they're best known for. I first learned of Picnic Pizza from an enthusiastic recommendation on the A Man's Gotta Eat blog last year.

Angelo's Picnic Pizza offers the truest-to-form “New York style” pizza slice that I've found thus far in my searching. The hand-rolled dough is pressed out into a very thin, but still flexible form, then cut in large, wide triangular slices. Its crunchy on the bottom and edges with a slightly gooey, gummy base that just screams New York. The flavor in the crust is minimal - good without trying to be jazzy - which is echoed in the sauce. Its clear that fresh ingredients are used, but they stick to the basics, laying the foundation with simple flavors. The soft mozzarella cheese is bubbly and delicious with a medium-high pull away factor. The pepperoni is, well, just decent. It has great texture, but only a hint of spice. (For my comparative reviews, I'm still rolling with the pepperoni and cheese - but next I'll be trying that double-crust, stuffed pizza.)

All said, Angelo's serves a pretty great slice of pizza. Its very authentic to its declared style and puts up a pretty serious fight against Joey's House of Pizza. The service isn't nearly as "entertaining" at Angelo's, but skipping that last unnecessary dousing of oregano* that Joey's all-too-often abuses might just edge them ahead. 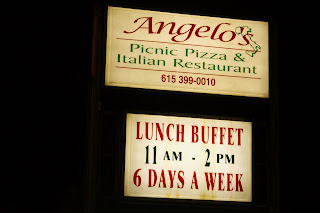 *Note: For the record, my husband, wrong as I feel he is, thinks that the reckless and haphazard sprinkling of oregano at Joey's is perfect. He has witnessed it being placed on the pizza and swears that it is applied with special care and attention.

Got any suggestions for places that I should cover? Let me know!
Posted by the mrs. at 6:57 AM

Sal's is on my list! Thanks for the info!