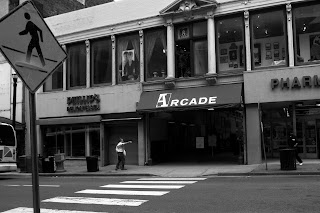 Nashville's first shopping center was born in 1902, constructed in an alley located between Fourth and Fifth Avenue downtown. Modeled after the "arcade" Galleria Vittorio Emanuele II in Milan, Italy, it is one of the few standing examples in the United States built in this covered archway style with Italian Palladian facades flanking both entrances. The architecture has helped make the Nashville Arcade a mysterious sort of time capsule...you can even find a few of the original tenants still keeping shop inside, including the famous Nashville Nut Peanut Shop and Tony's Shoe Shine. (I love that one. I hardly know any men who shine their shoes at all anymore, let alone visit an outside establishment to have a special shining.) 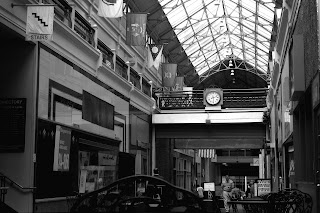 But since 1984, one of the Arcade's most popular tenants has been Manny Macca. Brooklyn raised and Brooklyn pizza trained, Manny moved to Nashville and opened Manny's House of Pizza to bring the real deal New York-style pies to the Southland. You may also know his little brother, Joey, who set up shop in Brentwood and Spring Hill. 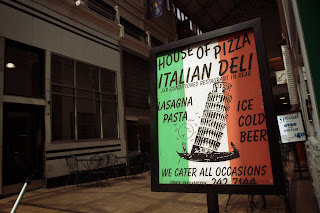 We've been to Joey's, now let's talk Manny's. Of course, I ordered a large, triangular slice of New York-style pepperoni and cheese pizza. 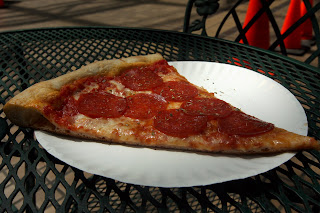 The crust is outstanding. It doesn't have any dazzling, exotic flavors: it knows its role and plays it beautifully with perfect texture and crunch. The base is paper thin with a light dusting of flour while the edges are soft inside and very crisp on the outside. A lesser crust couldn't hold Manny's sauce as it is thick, chunky and all over the place. I mean it - get at least five napkins. I usually don't like sauces applied this heavily, but this sauce was pretty tasty. There was a small hint of sweetness amidst the thickset tomatoes with a little bit of heat left behind. The pepperoni had a pleasantly surprising kick of heat as well in its big, juicy rounds...but the cheese is the highlight of the pie. This cheese is just out of control. It's a parmesan and mozzarella blend that is gooey, creamy, juicy and delicious with some of the highest pull away I've encountered. Mmmmm. And I can't believe I'm saying this, but the top was gently sprinkled (take note, Joey) with an Oregano-heavy Italian spice blend that was a welcome finish. At the end of the day, this was one outstanding slice of pizza (and just $4.35 with a large fountain drink).

Maybe if I lived in New York and could get pizza like this around every corner I'd quit my gushing already - but this is Nashville, and Manny's serves it like it's New York. HIGHLY RECOMMENDED.

When you walk in the front door at House of Pizza, you're already in line. You can order your slice to eat in or take out with seating available inside the surprisingly large dining room area with a few outdoor chairs and table in the arcade alleyway. Good luck getting one of those at lunchtime downtown. We arrived after the lunch rush however, so we had our choice of the "outdoor" arcade seating where we could dine alongside a few pigeons, a few crazy people, the custodial crew and some cops.

And when you're carrying a huge New York slice in one hand and a 25-pound 11-month-old in the other, having someone come get the door for you and help you to your seat outside is awfully nice. Thank you, Manny. 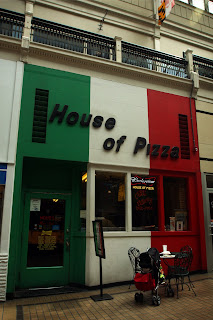 Got any suggestions for places that I should cover? Let me know!
Posted by the mrs. at 9:08 AM

That much better than Joey's?

Your description was perfect. We order that at work often, because I work downtown. Have you tried their supreme? It's REALLY good! (Even though I remove all the onions.) Found your blog through Bites, and I'm gonna need a lot of time to go through it! :)