It's been a while, but you still love pizza and so do we. You were once so committed to finding the best pizza in town and it's not time to give up now. Let's catch up on a few reviews so that we can meet some of Nashville's newer joints this Summer... 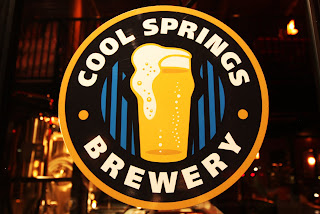 Oh Guido's. We all fondly remember the original 21st Avenue location (R.I.P.) with its thin slices of greasy pizza and tiny basement full of our fellow 15 to 17-year-olds in Chuck Taylors and oversized flannel shirts. The all-ages venue was the only place that you could get into and the only place where your friend's new band could plug in. The list of local talent alone that cut their teeth at Guido's is surely an impressive one - but that's another post better suited for this blog's other posters (we're waiting, BP and Andrew J).

My memories of Guido's had everything to do with that venue and nothing to do with their food. I'm certainly not saying that the pizza was bad, it's just that the pizza was never why I (or any of my friends) went there. So I remember being completely surprised when I heard that they were opening a satellite location in a strip mall in Cool Springs sometime around 2004.

When the Mr. and I visited (about a year before I was the Mrs.), it was nothing like the original Guido's. This Guido's had tables and waiters and black cloth napkins. It still claimed to have live music, but now in the form of sleepy jazz. The pizza had tried to go gourmet and they offered a build-your-own bar in the back. I must not have done a very good job building my own as we didn't go back until a new sign appeared on the door: Cool Springs Brewery.

Under new ownership, Cool Springs Brewery opened in late 2009 offering "the finest New York syle Pizzas [sic], Craft Brew and the best Live Music in town." Hmmm. The new name alone was not a good way to start our relationship. How do you present yourself as neighborhood microbrewery when Cool Springs is not really neighborhood? I recall a conversation that I had a few years back with a local hipster who commented on the fact that Cool Springs has Starbucks, McDonalds, Ann Taylor, Borders, GAP, and every other chain store imaginable. It has everything, he noted, except a SOUL (said with emphasis). He was a little overly concerned with the issue, but he was right.

So you bought a "be a microbrewery" kit and kept the little black stage in the corner, but how's the pizza? 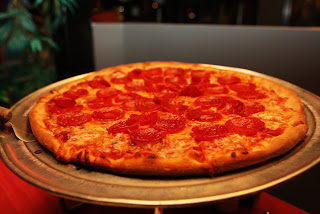 In case you've forgotten how I roll, I only order pepperoni and cheese for these reviews.

The wait was a little long, but the pizza was piping hot with bubbly cheese and curling pepperoni cups, served on the traditional raised metal platter. The sauce and ingredients were fresh (as in, fresh from the fridge to the oven) but the taste was pretty typical. The tomato sauce was present but lacked any distinct good or bad flavor and the cheese was the standard, pre-grated, soft mozzarella blend. It was tasty, somewhat greasy, hot and gooey with a reasonable pullaway. The overall taste was pretty good, it just didn't have anything unique or interesting going on. Many of these joints must use the same food supplier.

The crust was not New York thin, but still in the thin family with a crunchy outside and soft interior around the edges. Not the greatest, but not half bad. You can sample the different pizzas at their daily lunch buffet and the menu additionally includes pastas, wings, stuffed mushrooms, subs, calzones, strombolis, salads and desserts (including a chocolate pizza). The Mr. didn't have much to say about the beer either. Ho hum. Maybe we should talk more about the old Guido's instead?

FYI. Lupi's Pizza = worth the drive to Chattanooga. 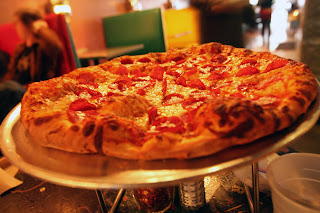 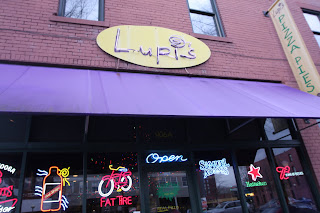 So far on our journey through pizza in Tennessee, MAFIAoZA's, Pizza Perfect, Manny's and Joey's have dominated...but Lupi knocks these kids down with one punch! Oh no! Is there a Nashville contender that can compete? Stay tuned for the upcoming Friday Night Slice installments from the Pizza Buds food truck and City House. 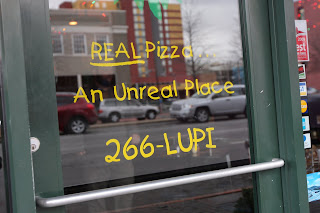 Got any suggestions for places that I should cover? Let me know!
Posted by the mrs. at 6:48 AM

Guido's will always ultimately remind me of Lifeboy (still known as Soul Surgeon the first time I saw them there circa 1998). But really, the pizza was not bad. Thin, fold-y New York style is my favorite and they did that pretty well. R.I.P. Guido's.