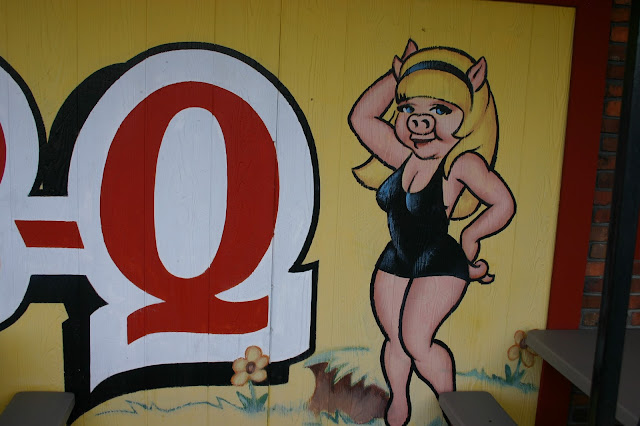 There is no mile in Middle Tennessee more densely populated with barbecue restaurants than the stretch of Clarksville Highway from MetroCenter to Bordeaux. There are no less than four in this stretch. 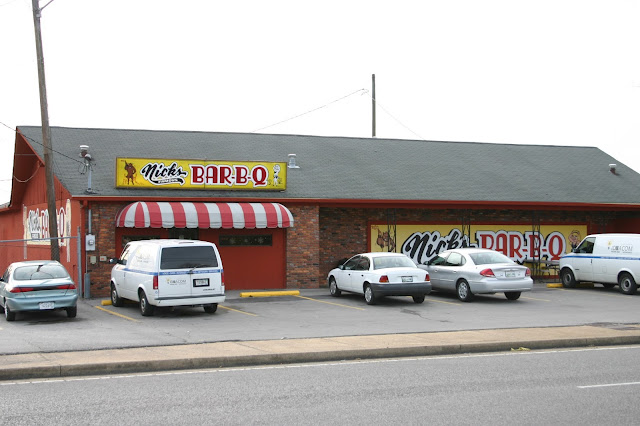 Nick's Famous Bar-B-Q is located at the intersection of Clarksville Highway and MetroCenter Boulevard. Many Nashvillians will recognize the Nick's name and logo from area Kroger stores, which prominently feature displays of their barbecue sauce. How Nick's was able to land this deal I am not sure, but though their sauce has a high retail profile, I would venture to guess that most people in this area do not even know that Nick's has a restaurant. But after tasting the food, maybe that is for the best.

Nick's is the only barbecue restaurant in North Nashville that is not owned and operated by African Americans. It is also the only one at which you have to order through a bulletproof glass window. This makes for a rather bleak dining atmosphere. But what about the food? 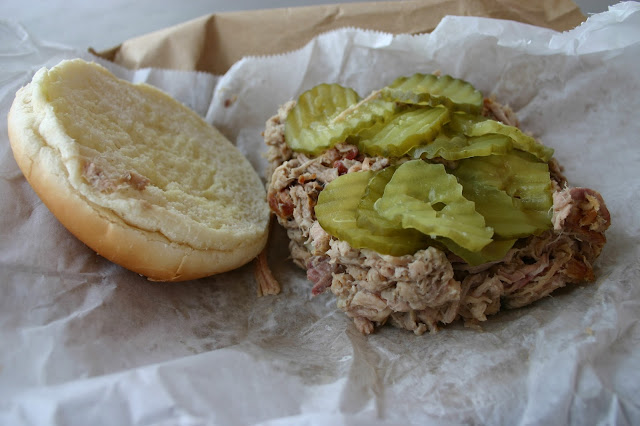 At this point in this series of reports, I have gotten very used to finding pickles on my barbecue sandwich (is this a Nashville thing?). But Nick's takes it to another level - there were 12 pickles on this sandwich. But even if you were a pickle fanatic, I'm not sure a dozen dill chips could salvage this sandwich. The pork was plenty juicy, having benefited from a dousing of vinegar-based sauce. But much like Whitts and their bevy of copycats, this just doesn't taste like barbecue. There is no smoke and little to no seasoning on the meat. 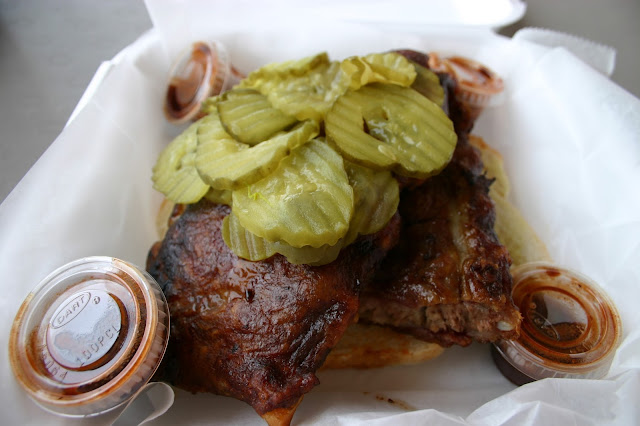 With this order of Nick's ribs, we may have a new world record for number of pickles used as a garnish. Twenty-two! Again, though, the product underneath failed to deliver. These ribs were bland and dry. A dip in Nick's signature Worcestershire-heavy barbecue sauce makes them much more tolerable. 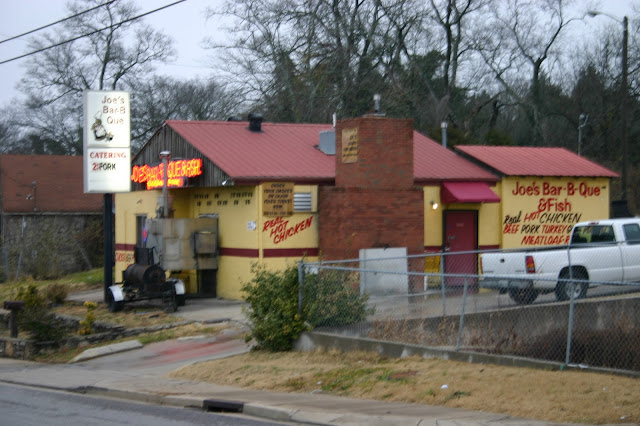 Across the river and in the heart of Bordeaux sits Joe's Bar-B-Que & Fish. Joe's is drive-thru only and boasts an extensive menu. 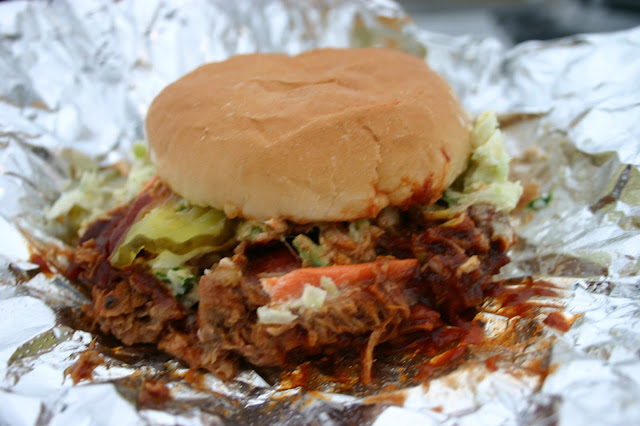 The barbecue sandwich with slaw is one big mess. This is another sandwich that you should not even think about trying to pick up. The bottom bun is buried under a mound of saucy pulled pork, coarsely chopped slaw and pickles. The pork is so saturated with thick ketchup-based barbecue sauce that it almost has the consistency of a sloppy joe. Nice smoky pork flavor under that all that sauce, though. 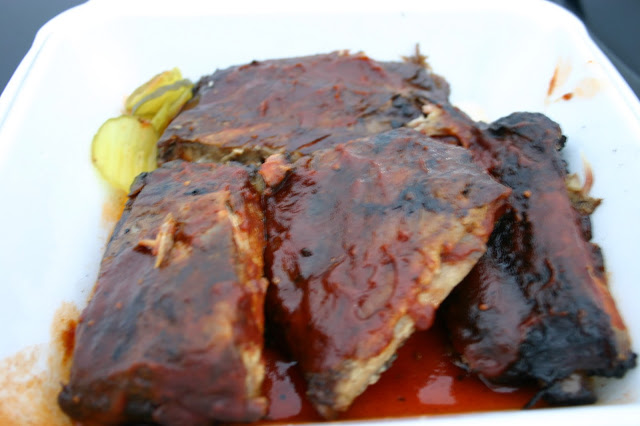 Sauce dominated the ribs, too. An excess of the stuff resulted in a mostly mushy exterior, save for a few nicely charred pieces. Inside was juicy and tender. 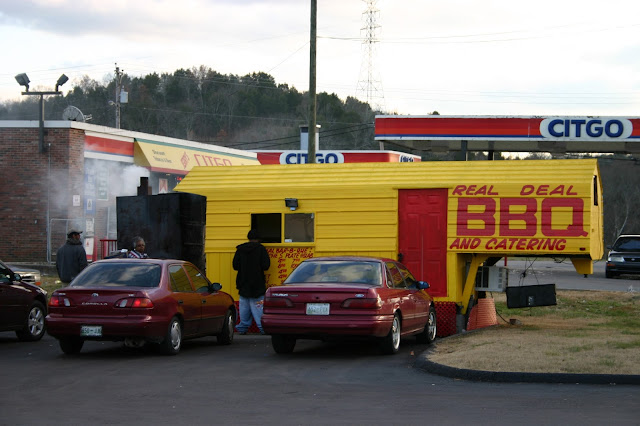 A little further up the road is Real Deal BBQ and Catering. It shares the same red and yellow paint scheme as Joe's. Perhaps they have tapped into the psychology of color, which says that red, yellow and orange are colors that make people hungry (think fast food color schemes). Or maybe they're just USC fans.

Anyway, Real Deal has a huge smoker set up next to their trailer and when I was there, it was just billowing smoke across the parking lot of the adjacent Citgo. 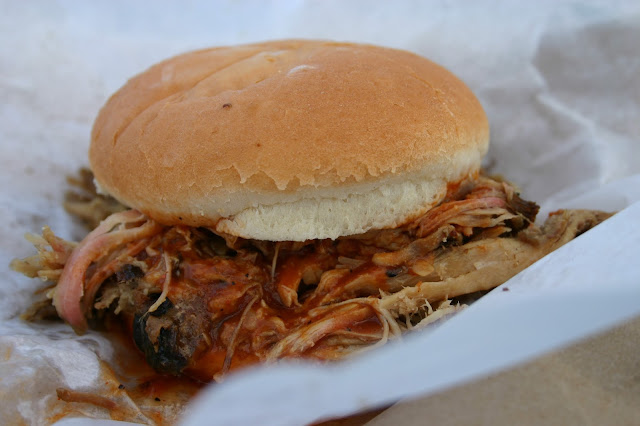 Upon tasting the pork sandwich, it is apparent that that this is in fact the real deal. The meat was very smoky and pulled in big coarse pieces. There was a good amount of bark present. If I had a complaint, it was that there was an excessive amount of fat present as well - big mouthful-sized pieces that should have been removed. Other than that, this was a nice sandwich. The sauce - equal parts vinegar and tomato - was a nice complement. 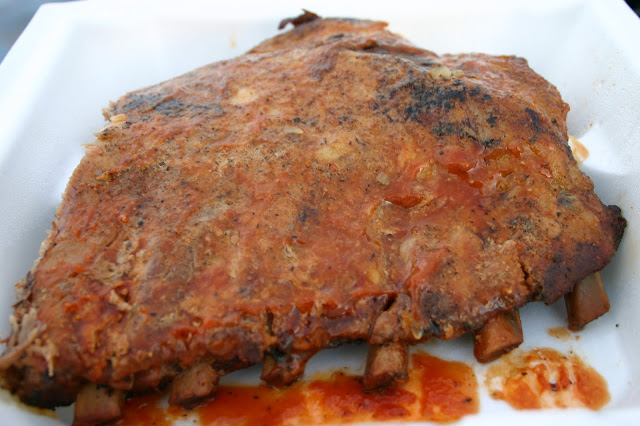 The ribs were great on taste, but lacking in the texture department. They were perfectly seasoned with salt, pepper and spices, and again, the sauce was a nice touch. But they were overcooked, resulting in a mushy, flaccid texture. 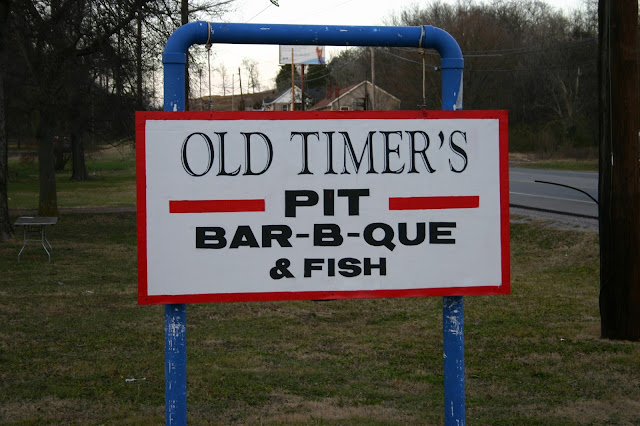 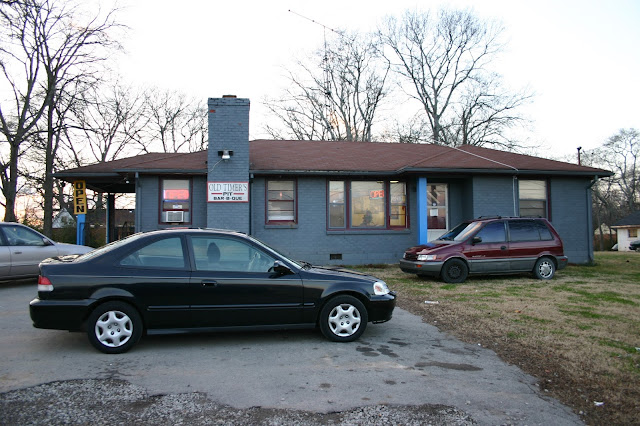 Nearly right across the street from Real Deal is Old Timer's Pit Bar-B-Que & Fish. Converted from an old ranch style house, this is one of the only barbecue restaurants in this area that has a dining room, although everyone was getting theirs to go when I was there. 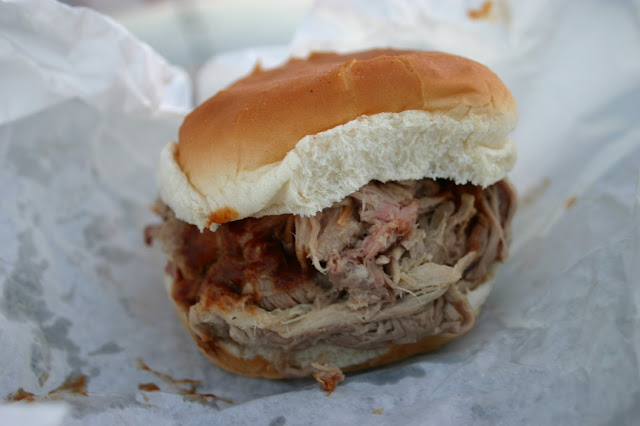 This shoulder sandwich was solid. The pork was very tasty - light hickory smoke flavor, just salty enough - but it lost some of its luster with a mushy texture. The sauce was fantastically sweet and spicy. 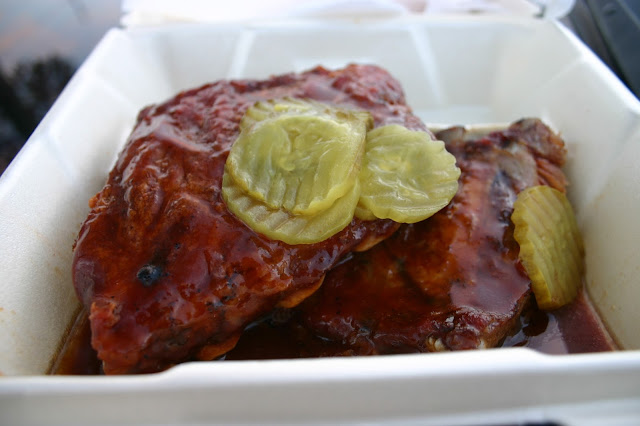 Old Timer's ribs were the highlight of this week's report. Yes, they were a bit heavy-handed with the sauce, but the sauce was great, so it's okay. These were St. Louis style spares which were cooked just about perfectly - tender, but still clinging loosely to the bone. Until now, I was beginning to lose hope that a local barbecue joint could cook good ribs, but on this day, Old Timer's delivered.

I wonder where the pickle thing originated?

I haven't bothered with Nick's and felt guilty about that....thanks for making me feel better. I think Real Deal has been under-rated. Joe's is definitely better with sauce on the side. I'll have to get back to Old Timers for the ribs. Great report, all of the parts...one of the most comprehensive looks at Nashville barbecue that I've seen! Hey make it up to Barbecue of Tennessee on White's Creek Pike in Joelton sometime. It's right across the street from the schools and just down from the I-24 exit. Good shredded pork sandwich, nice smokey chicken...ribs are so-so.

You were where I was born and raised.

To answer Rob's question about the pickle, when I lived there in the 80's almost every market on Clarksville Hwy. served in-store cast iron skillet fried HOT chicken. And brother I mean HOT!

Because Prince's was just right down the road, so the markets served the pickles loaded up.

Kids that stayed there remember that.

Nick's was there first. To us at the time it was like Witt's. We always got the pulled pork and corn bread.

Real Deal was years later and had some dang fine pulled pork. On Sat. I'd hit the market for some hot chicken and Real Deal for some pulled pork, ice down some Bud, and we were good to go...

I never had Old Timer, I had moved away toward the end of the 80's.

The best bbq I can remember around there anywhere was at the St. Mary's (?) school annual bbq in Joelton every year. People would come from miles away for the ribs and pulled pork. Back then you could buy it for a dollar a pound.

I still remember all of the pits and cooks. When you started coming up the hill you could smell that wonderful smell of heaven.

Great summary of these BBQ joints. Looks like I will be steering clear of Nick's, and trying the Real Deal.

St. Lawrence church still has it's annual barbecue in Joelton (usually August) with some pretty damn good shredded pork....similar in style to the type at Barbecue of Tennessee. I wish all those Clarksville Highway joints still did Hot Chicken like that.....