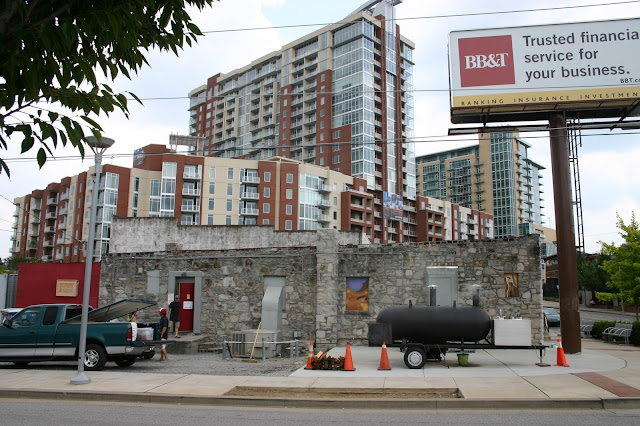 Before we continue our counterclockwise trek around Nashville's surrounding counties, I wanted to take a look at a couple of new barbecue restaurants in the city that are generating some buzz. 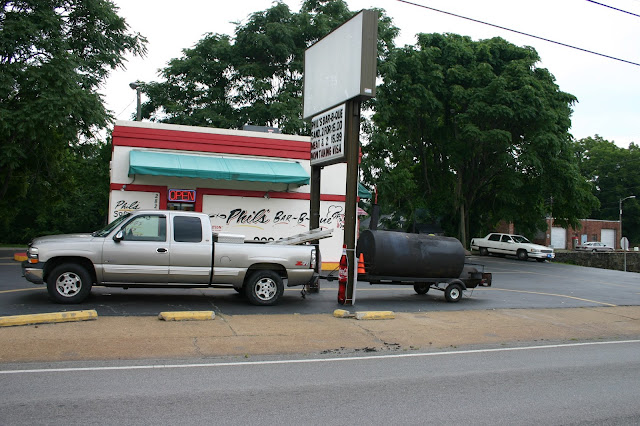 East Nashville has a new takeaway barbecue joint. Phil's Bar-B-Que is the first one of the east side's barbecue places to actually be located on the area's main commercial corridor - Gallatin Road. It's located just south of Trinity Lane in tiny building with twin drive-thru windows. Despite the presence of a cooker on the back of the truck in the picture, I think that most of the actual cooking is done on a permanently constructed cooker under those trees behind the restaurant (you can just barely see it). 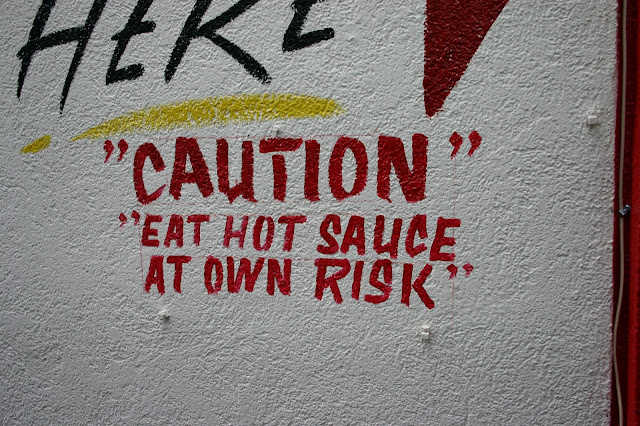 Any hot sauce with a posted warning is serious business! 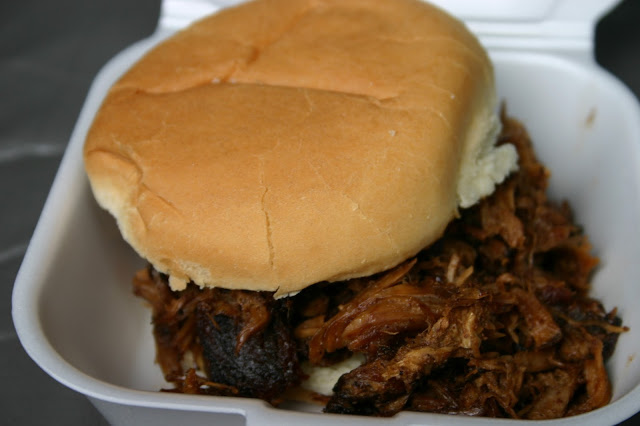 The sandwich comes overflowing with pulled pork, unadorned by sauce or anything else. And although the meat was a bit dry, it was generously seasoned, having a rich, savory, salty taste. The bark pieces were especially tasty. 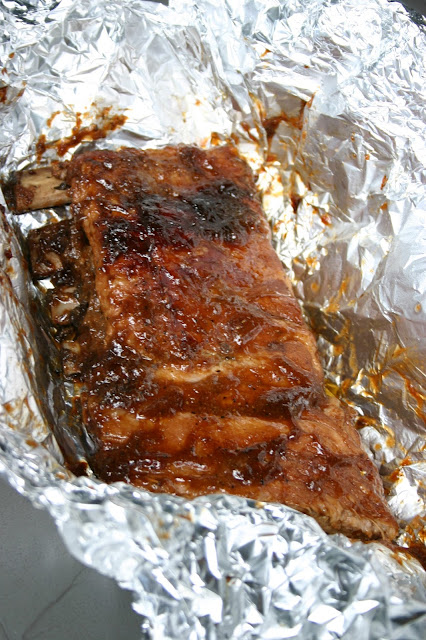 On both occasions that I visited Phil's, the ribs left some to be desired. They are St. Louis style spare ribs with a lot of meat on the bones. And although the ribs generally had good flavor, the texture was off. They were cooked past falling-off-the-bone to the point where the meat had a mushy, almost gelatinous texture. Hopefully they will improve as the place continues to work out the kinks. 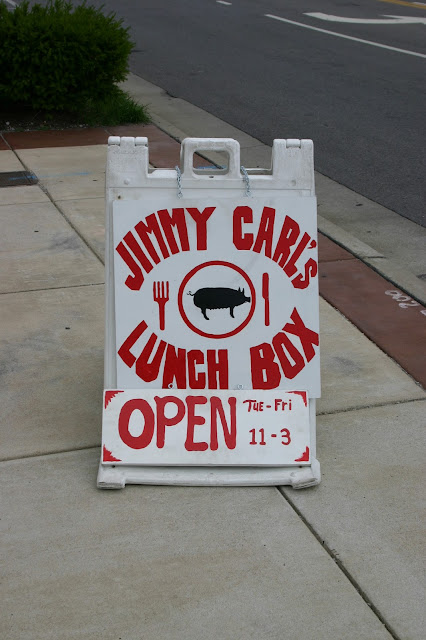 Barbecue comes to the Gulch! In a nice counterpoint to all of the trendy urban professional-oriented chains that have been popping up in this neighborhood, Jimmy Carl's Lunch Box has opened in a familiar setting - the Station Inn. 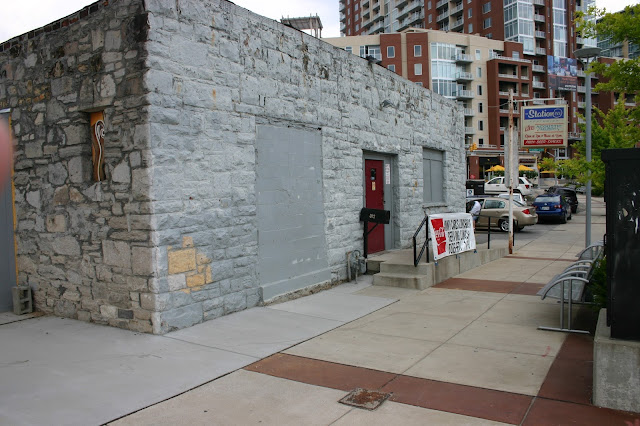 I love the Station Inn so much. It's on the short list of things that I always try to recommend to visitors from out of town, especially if they can go on a Monday night and see the Time Jumpers. As the landscape around it continues to be transformed into Condo Paradise, the Station Inn is morphing from typical neighborhood joint to cultural anomaly, and that just makes me love it more.

One of the things that's been mentioned a lot already about the Jimmy Carl's experience is how naturally the Station Inn transitions from music venue to barbecue joint. In terms of atmosphere, proprietors Pat Isbey and Russell Nelson could not have asked for a better location. The interior of the place literally feels like a 50 year old barbecue joint. 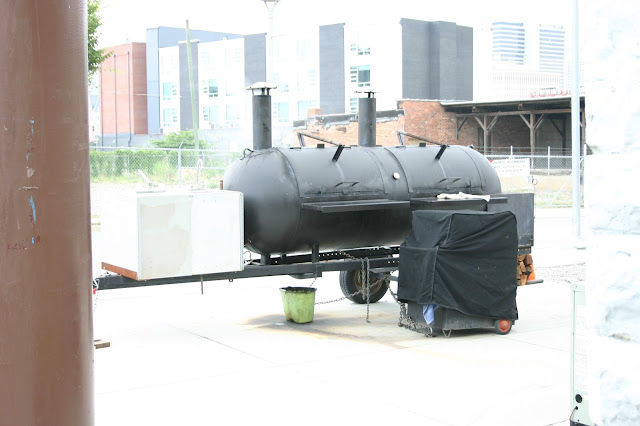 All of the meat is cooked on a newly constructed concrete slab outside the building in a large offset smoker. The side items are prepared at another kitchen offsite, because the Station Inn has no kitchen! 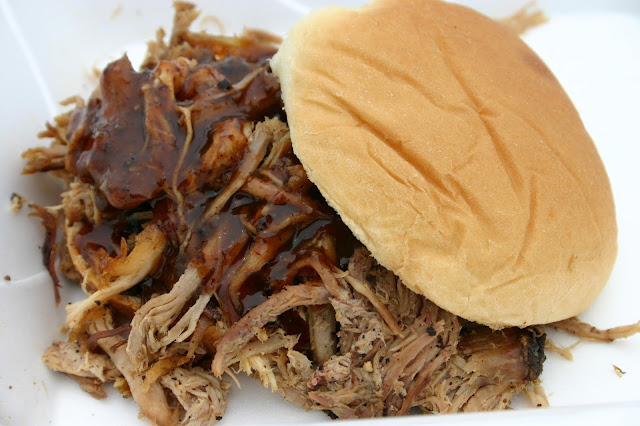 As you can see, the pulled pork sandwich is overflowing with meat - I challenge you to find the bottom bun in the picture. The meat is fresh and tender, with lots of smoke flavor and the hot barbecue sauce is a great addition. 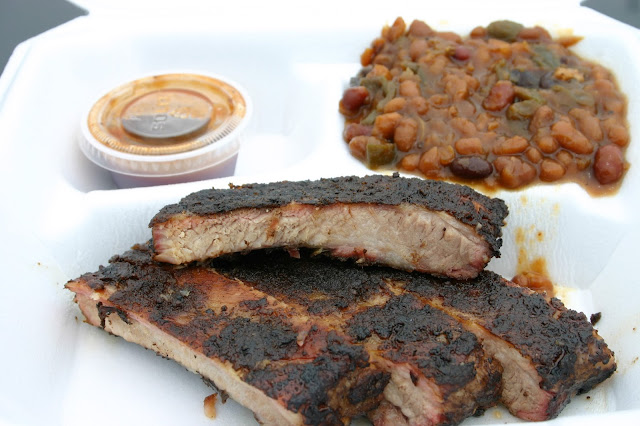 The ribs are outstanding. Not only were they cooked to perfect tenderness, they were cooked to perfect tenderness each time that I visited, and that is saying something in a business where consistency can be tough to come by. The meat is not falling off the bone, but pulls away easily with each bite, leaving clean bone behind. The seasoning and flavor of the ribs seem to be still slightly evolving. The smoke flavor, which was a bit strong on my first visit, has been toned down since. The ribs are not sauced, which is normally not my preference, but in this case there is lots of flavor provided by the generously applied rub.

One thing that I immediately noticed on the menu is that at the bottom, it says "Try the Beans." And after trying them, let me reiterate the message - "try the beans." They are about the best baked beans that I've had in a restaurant, this side of Gates & Sons. Three different kinds of beans, lots of chunks of pork and beef, onions, and they are plenty sweet, too.

Mmmm, I can't wait to try Jimmy Carl's! Too bad I work down in Cool Springs making it nearly impossible for me to get their during their business hours. Guess I'll have to play hooky one day :-)

Great review! I love the photo with the condos in the background, great juxtaposition

I was also very disappointed in Phil's BBQ. I had brisket which lacked any sort of bark and had a texture more like pot roast. I hedged my bet with some of their smoked wings and got some odd battered, honey-glazed things. East Nashville is just a dumping ground for some very bad facsimiles of food.

I went out to Jimmy Carl's Thursday. It was great. The pulled pork was delicious. As a fan of dry ribs, I really enjoyed them. You were right, the beans were pretty stellar. I had visions of dipping fries or potato chips in them. I think Davidson Co. finally has a good BBQ joint.